To continue with the story of Chanukkah and latkes, Judea was eventually captured by the Romans. Some of the Roman rulers could care less about various religions of the occupied territories, or provinces, as long as the taxes were collected regularly and accurately. Some others, however, persecuted Jews relentlessly; Emperor Hadrian even earned the nickname “Destroyer of the Jews.” Once again, all Jewish learning was forbidden, once again brave little bands of fighters rose again their oppressors. And once again, my inquisitive four-year-old brain put a story together that went like this:

Children were given a dreidel (spinning top), with four sides. On each side there was a Hebrew letter: Nun, Gimmel, Hei, and Shin. They were also given some coins so that when Roman soldiers, who were notorious gamblers, would come across a group of kids sitting with their teacher, they would find an innocent game of top going on and even invited to participate. In reality, the letters were an abbreviation of a phrase Nes Gadol Haya Sham (a great miracle happened there), and the dreidel served as a visual and kinesthetic aid for a lesson on Chanukkah.

Contrary to a cute a very popular song, we, as kids, had a tin-plate dreidel, made by my great-grandfather, and it was spinning perfectly. Even though we were given Chanukkah gelt (money, not gifts!), we were not allowed to use it for gambling; instead, we had to use roasted walnuts. The rules of the game are very simple:

You start by placing your bets – equal and agreed amounts. Then you take turns spinning. If it lands letter Nun up, it means “nichts” (“nothing” in Yiddish), so nothing happens, and the dreidel passes to the next person. If it lands on Gimmel – “gantz” (“everything” in Yiddish), you just got lucky, and you take the bank. If Hey –  “halb” (“half”) shows up, you are only half-lucky; you take half of the bank, which is better than none! And if you hit Shin – “shtel” (“put in”), you have to add to the bank. Incidentally, in Israel, where the great miracle of Chanukkah did happen, the dreidels have a letter Peh, for Po – here, instead of Sham – there.

You don’t need to know Yiddish to see a little discrepancy here: Yiddish is one of the Jewish languages of the exile; it simply did not exist before the destruction of the second Temple by the Romans. Some scholars figured out elaborate Gematria (numerology): the four letters, added in a certain way, equal 358, which is the numerological equivalent of the word Messiah.  Others suggested that the letters stand for the names of the four kings who have tried to destroy the Jews in Ancient times. Surprisingly, however, the game is only a variation of the German “trundl” game which, in turn, is a variation of the English Totum, or Teetotum game (“totum” means “all” in Latin), where the rules were the same, represented by four Latin letters.

Chanukkah gelt, though, is really related to education. Says the Talmud that Chanukkah lights are holy, thus are not to be used for any mundane purpose, such as counting money. Another visual and kinesthetic lesson for all times: don’t count your Chanukkah gelt in front of Chanukkah lights. Chocolate coins fall under the same rule. Walnuts, or any other nuts, in Yiddish are called “nisim” – another reminder of Nes Gadol, the great miracle of Chanukkah. And because nuts there were aplenty, but potatoes had not existed yet (for explanation, please see But Hannah Did Not Have Potatoes! Latkes with a Tropical Twist.), the all-around favorites in our family were Retchene (buckwheat) latkes that have a subtle nutty taste.

As in all my latkes recipes, the  constant is non-dairy prostokvasha, or clabbered milk (for recipe, click here). You can substitute any non-dairy (or dairy, if you are so inclined) buttermilk, kefir, or yogurt. I use eggs, but egg substitutes will work. Add some agave to sweeten them, a little baking powder, salt and pepper, and a dash of cinnamon. 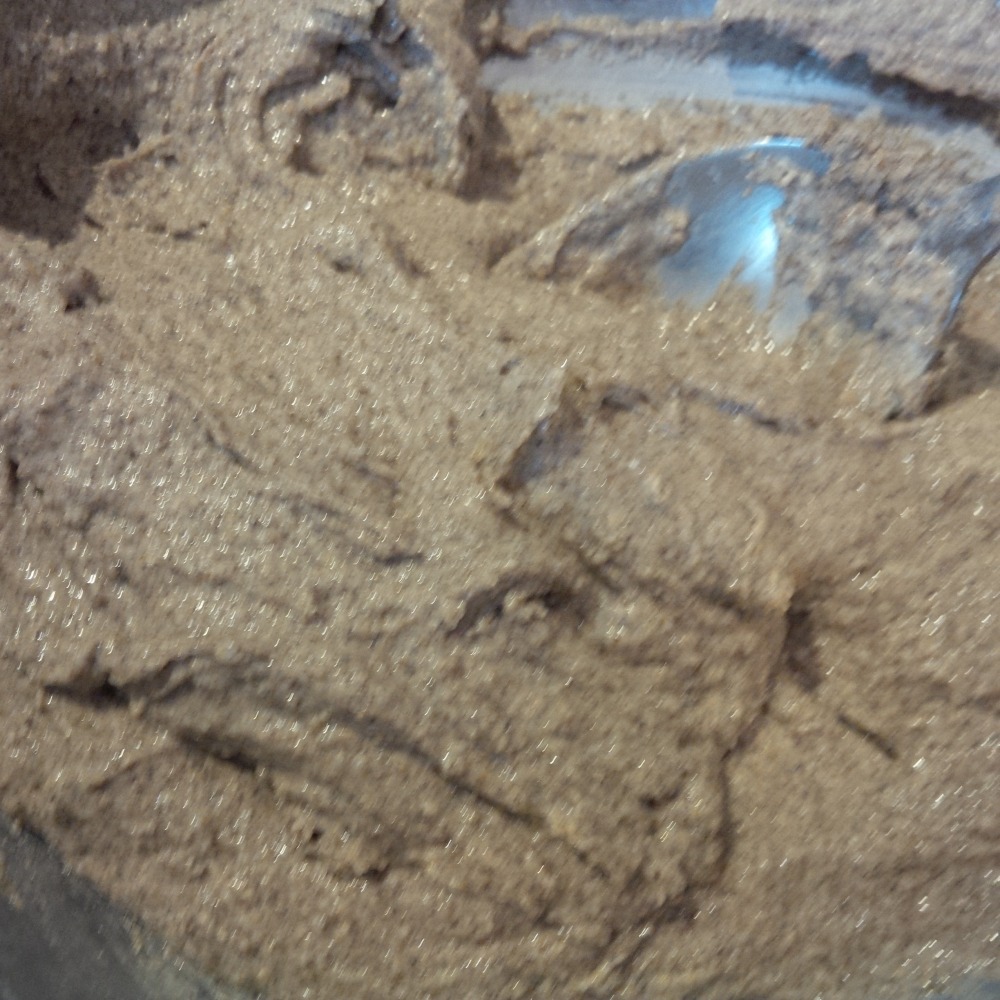 Add your wet ingredients to buckwheat flour and mix everything together really well. You will get a thick and sticky batter, more like soft dough than your usual pancake batter. As long as there are no lumps, that’s how it should be.

Fry them for about five minutes on each side on a lightly misted with oil frying pan, medium heat. Hint: when you flip them, press lightly on top to flatten them, otherwise the middle will remain uncooked.  Some batter will be squeezed out, but don’t worry – it’ll fry. Remove them to a plate lined with paper towels to blot out excess grease.

Meanwhile, you can use a few minutes to make  berry sauce. I happen to love blueberries, especially when they are in season, huge like cherries, and juicy. But you can use cranberries, or any berries you like. Just throw them into a saucepan, cover with sweet light red wine, add agave to taste, and bring to boil. Then reduce heat and let them simmer until they start bursting. Gently squash them, but gently! – or else you’ll be splashed, you’ll look funny, and your kids will laugh at you. Now, stir and let them simmer some more, as the liquid evaporates to the thickness you prefer. 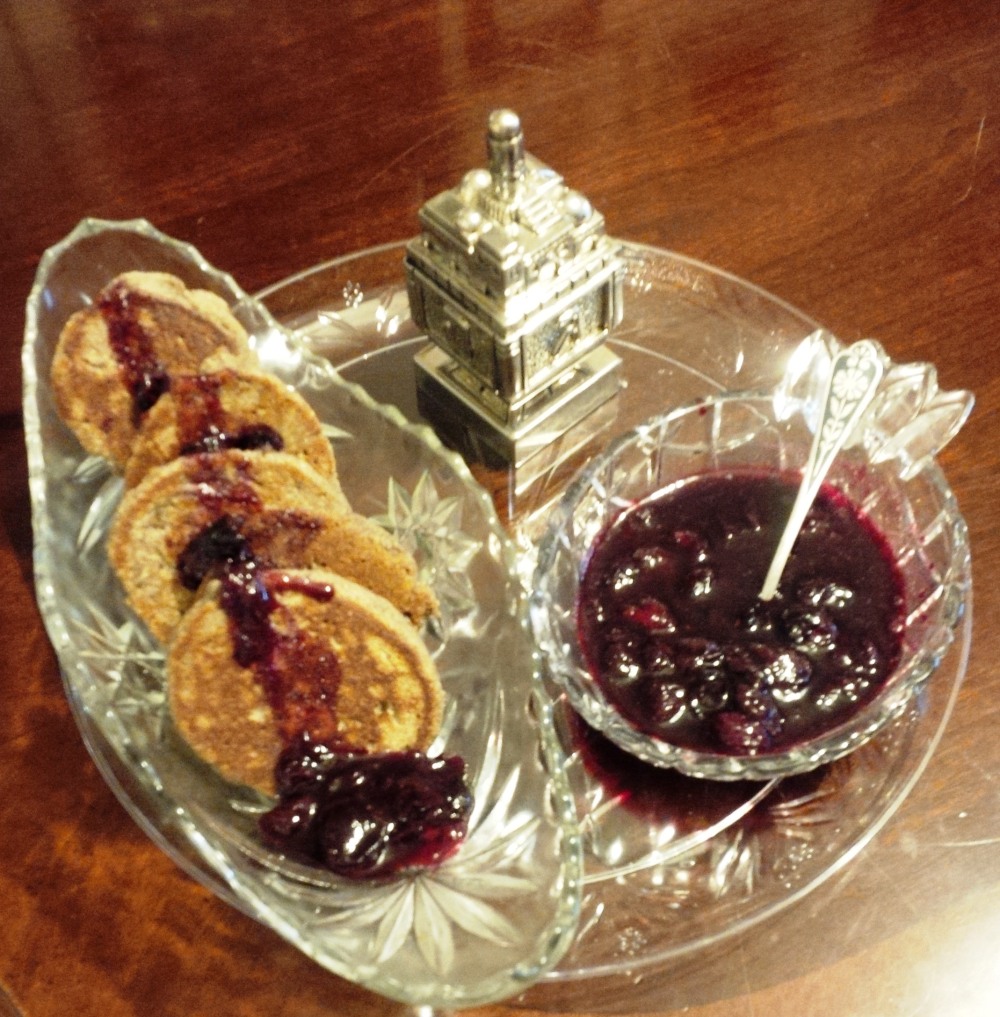 The silver dreidel you see on most of my Chanukkah-related photos is not real. It cannot be used to play (don’t think the grandkids haven’t tried!). It’s not made by Frank Meisler, even though the style is similar. It doesn’t open, and there are no surprises hidden inside. Still, it is very precious to me because my father, may he rest in peace,  brought it for us from Israel. Every year I made delicious Retchene latkes, my father’s favorite kind, and this year I’ll have them on my table again, and we’ll drink a Lechayim to my father’s memory.

Have a Happy Chanukkah – enjoy!