I have promised to share a method of making prostokvasha, or clabbered milk. Prostokvasha in Russian means “fermented simply,” which is exactly what clabbered milk is; it’s simply raw, or non-pasteurized milk left in specific temperature and humidity to ferment on its own, naturally, until it turns into a thick yogurt-like substance. In Russia, it was eaten on its own, as a snack, and considered one of the best hangover remedies. We used it also to make farmer cheese and as a base for all kinds of pancakes which is what prompted this post to begin with. It looks like you, beautiful people out there, love pancakes!

A while ago, one of the bloggers I follow, Rach of the life of a onesie wearer, asked her readers if  – and how – they made pancakes from scratch. In my comment, I promised to show how to make the base before I posted any actual pancake recipes. So here it is, Rach and everyone else, nice, simple, non-dairy and gluten free.

There is plenty of research indicating that fermented foods, full of probiotics, promote digestive health. Fermented foods include such staples as pickles or sauerkraut, easy to make at home, or kombucha that costs a fortune at your local health food store. Clabber is one of the most effective fermented foods because, in contrast to fermented veggies or drinks, it has protein, as well as some vital minerals. But, as I have discovered when I came to the U.S., there is a problem, as all milk sold here is pasteurized.

Not aware of the difference, I went through the same tried and true procedure that worked in my grandmother’s kitchen in Odessa: I put a tablespoon of sour cream into a glass, filled the glass with milk, covered it, and left it on the counter overnight. I opened it in the morning, shook it up a little to see if it solidified, and – nothing! Still the same milk. I left it there for the entire day and checked again in the evening, then again the next morning – zilch! Maybe, I thought, American store-bought sour cream that is much lower in fat than what we had bought from a farmer, is not doing the job, so let’s add some more of it, and so I did, another tablespoon. A day later, when it showed some signs of curdling, but not solidifying, as it should have, I chanced to taste it – yech! Spoiled, rotten, and bitter.

It was not many years later, as I was told that I should avoid dairy products and had to switch to soy milk, that I discovered Tofutti – my best friend! – and decided to experiment. 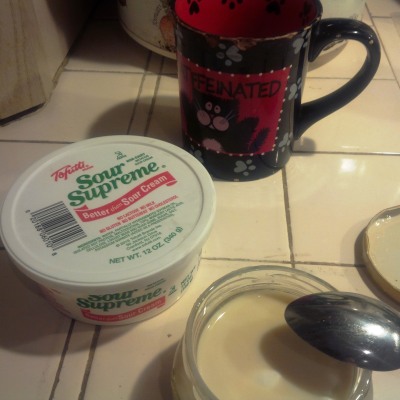 I followed the same exact method: put a tablespoon of Tofutti Sour Supreme into a glass jar and filled the jar with soy milk. Holding my breath, I covered it and left it on the counter overnight. 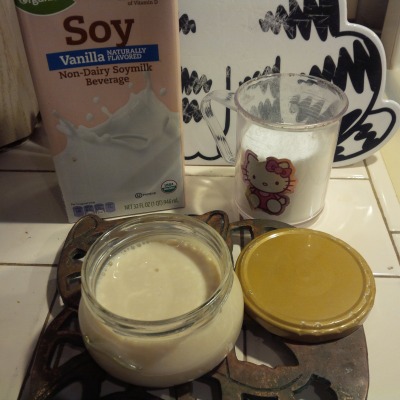 Miracle of miracles! By morning, it has solidified. I now had my prostokvasha to enjoy as breakfast or a late night snack, to make non-dairy pancakes, and to add to cakes and muffins for extra fluffiness. 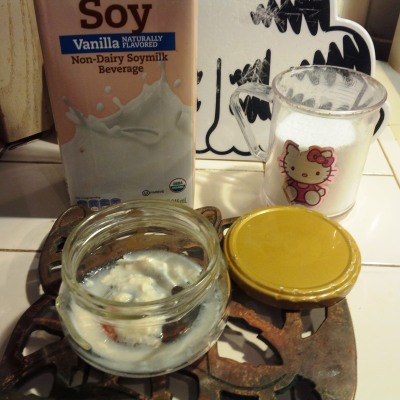 It can stay in your refrigerator next to forever, and just in case you run out of Sour Supreme, leave about a teaspoon of it for a starter and just fill the jar with soy milk. And if you also run out of soy milk, coconut milk will work, but not rice or almond milk. And if you don’t have either soy or coconut milk, simply refrigerate your starter until such time as you get it, and repeat the procedure.

Oh, and by the way, if you want it dairy, you can still do it the old-fashioned way, as long as you can get non-pasteurized milk and sour cream with no chemical additives, the fatter, the better.