Chanukkah is coming, and kids are looking forward to stuffing their faces with latkes – potato pancakes. When I was growing up, we had all kinds of latkes on Chanukkah, and sometimes my grandmother skipped the deruny (potato latkes) altogether because of the variety of other, more interesting ones: carrots with apples, zucchini with raisins, and my father’s favorite rechene (buckwheat) latkes. When a guest inquired about the missing “traditional” kind, she would say, “But Hannah did not have potatoes.” Two burning questions of my childhood were: who was Hannah and why, oh why, couldn’t she get potatoes?

This is the story I put together at the age of about four. In the ancient times, there was a mean king who didn’t want anybody in his kingdom to be Jewish. He sent his soldiers to the Jewish Temple (Temple? we had a Temple? where?) and ordered them to bring him anything that was valuable (like grandmother’s silver candlesticks?) and throw away everything else. Bear in mind that World War II ended only ten year ago, and Stalin (may his name be erased forever) died only two years ago, so evil kings, looting, and destruction of property was familiar territory for every child.

Then, like in every story, there was a good guy, a true hero, Yehuda Maccabee, who, together with his brothers, started an uprising, defeated the huge army of the bad king, and liberated the Temple. Also pretty normal to every child in communist Russia. Now comes a miracle! When the Maccabee fighters entered the Temple, they found a total mess!  An eternal light had to be going non-stop, but they found only one sealed cruse of pure oil that could be used for it. That was enough for only one day, but it would take the priests a week to prepare more oil! Nothing to do but use what they had, and so they did, and miraculously, that one little cruse of oil lasted for eight days. That’s why we celebrate Chanukkah for eight days, and each day we add one more light. Also, that’s why we celebrate not only the miracle of a small band of rebels defeating a mighty army, but also the miracle of oil, the holiday of Light.

But who is Hannah, why do we eat latkes, and what about those potatoes? The way my four-year-old brain processed bits and pieces of adult conversations, Hannah was Mrs Maccabee, the mother of Yehuda and his brothers. She made another miracle happen when she used a few drops of leftover oil to make latkes for the whole gang.

There are two different stories that had converged in my head at that age, and given that even discussing religious holidays was dangerous in those times, I haven’t unraveled the truth until much later. During the Syrian rule over Judea in 2nd century B.C.E., a Jewish mother and her seven sons were brought in front of the king Antiochus Epiphanes who commanded them to bow to idols. When they refused, the sons were cruelly tortured and killed in front of the mother, one by one. After the death of her sons, the mother also died. This tragic incident is discussed in many sources, but not until 12th century the name of the woman is given as Hannah, or Channah (The Book of Josephon). Even though in the earlier sources she is sometimes called Miriam, and sometimes Solomonia, from this point on, the story has spread as “Hannah and her seven sons.”

What does this have to do with the Maccabees uprising? Nothing, other than both occurred during the same times of the same evil king when Jews suffered the same persecution. We don’t even know the name of the real “Mrs Maccabee” (Maccabee is not a name anyway, but a nickname that means “a hammer” and an abbreviation of a Hebrew phrase Mi Kamocho Ba’eilim Hashem, “Who is like You, O G‑d.”). But one thing is certain: my grandmother was right, and Hannah did not have potatoes – they were not brought from the new world until mid-16th century. So why do we eat latkes? Why do we eat sufganiot – jelly donuts? The answer is simple: there are no traditional Chanukkah foods, but to remind us of the miracle of oil, we invent all kinds of fried-in-oil delicacies. 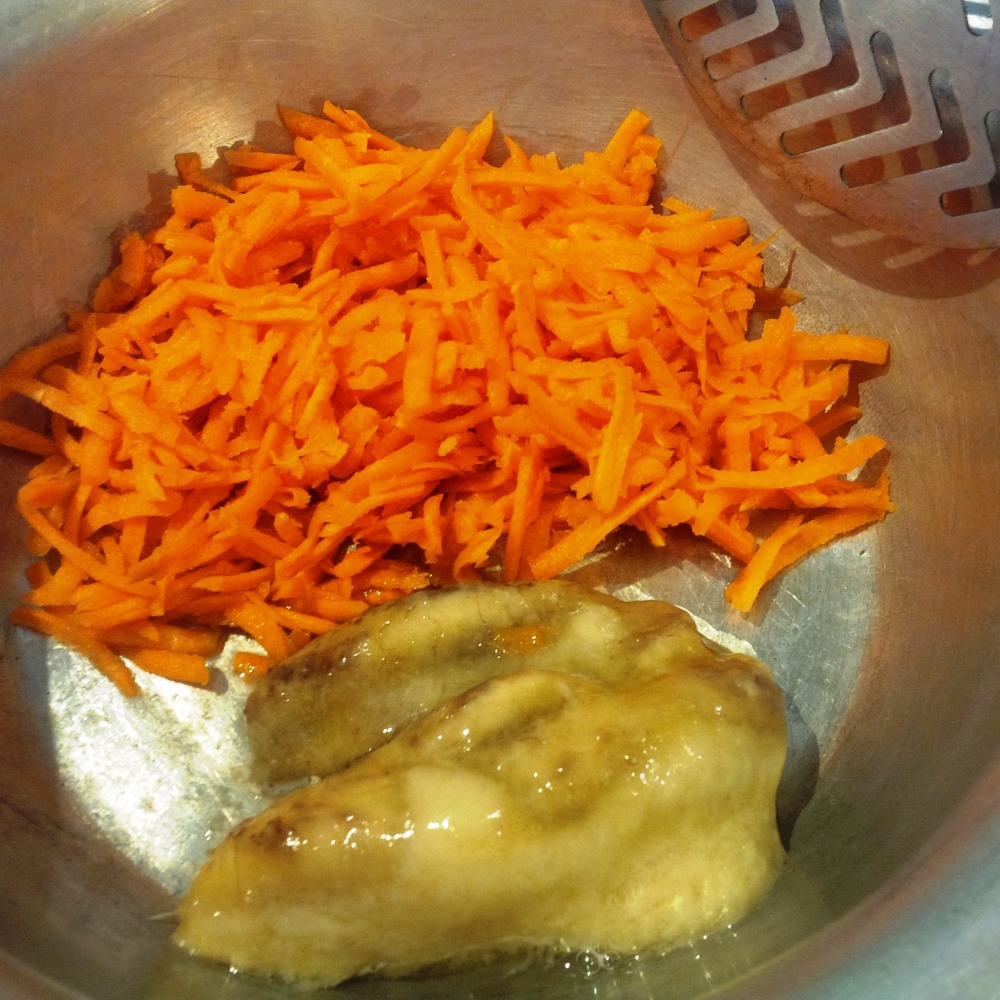 We love these latkes with a tropical twist – a combination of carrots and bananas. I prefer to use overripe bananas that I save in the freezer for just such occasions. Defrosted, they don’t look pretty, but don’t judge them by appearance. Mash them up with a potato masher and mix them with grated carrots.

I make my latkes with soy flour, to avoid carbs and to add some protein, but you can use almond or coconut flour instead. For a vegan version, you can use egg substitute instead of real eggs. The most important ingredient is prostokvasha, or homemade clabbered milk (for recipe, click here). I always have it around, but if you don’t, you can use any non-dairy kefir or yogurt. Add a little agave for sweetness, a dash of cinnamon, a pinch of salt and a sprinkle of pepper, and you are ready to fry. 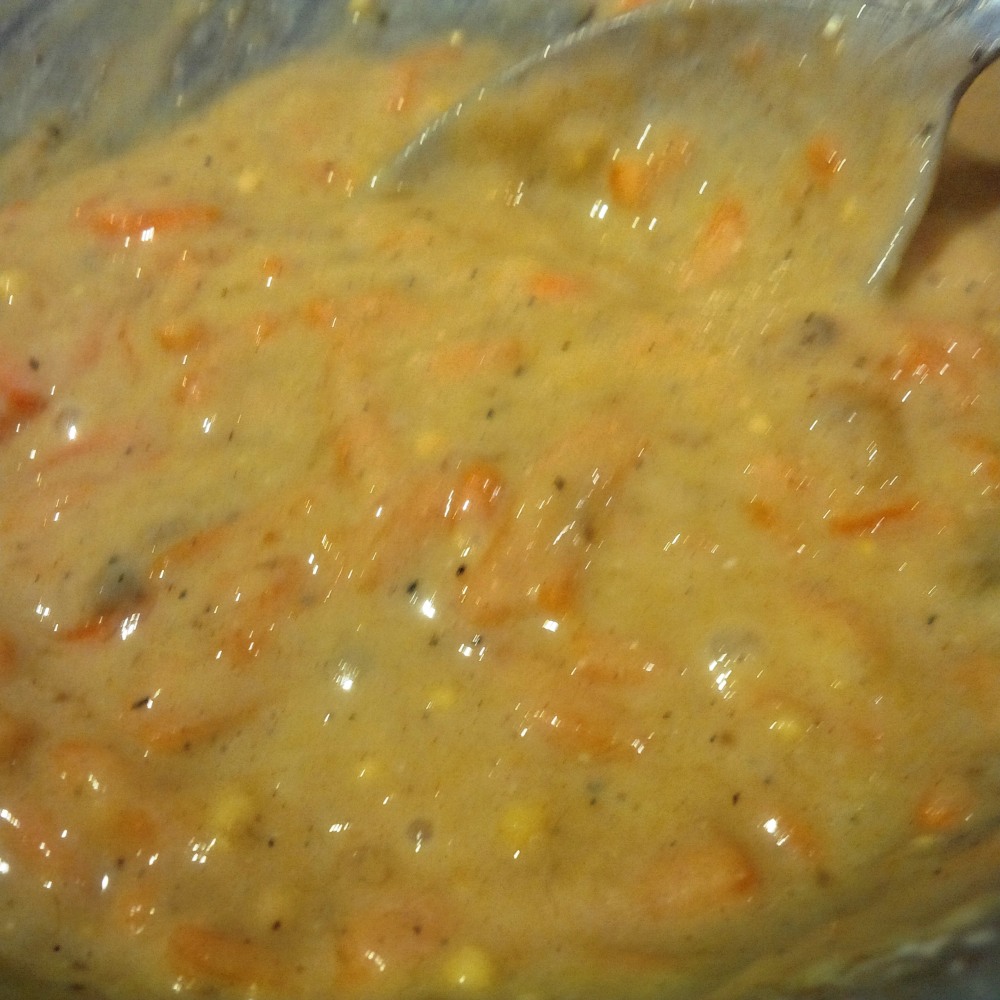 You have to mix it really well – you don’t want clumps of carrots or lumps of soy flour. Make it smooth! Meanwhile, preheat your frying pan and mist it with oil. Contrary to a popular belief, I don’t drench latkes in oil, and they still come out just fine.

Fry them on each side for about five minutes. You’ll know it’s time to flip them when they start plumping up and turning golden brown on the edges. When ready, remove them to a plate covered with paper towels, to blot out excess grease.

These fluffy and tender latkes are multi-purpose: they could be served for breakfast, lunch, appetizer, side dish, or even dessert. I would not recommend topping them with apple sauce as it will clash with bananas, but sour cream (real or fake), berries, maple syrup, or simply powdered sugar (in my case, xylitol) all work very well. My husband just smothers them with chocolate syrup. Whichever way you do it, you’ll have a real celebration!