A petite, slender girl with a tomboy personality, little Sophie was growing up in a highly aristocratic, but dirt poor family. Parents largely neglected her while grooming her brothers to become royalty (both brothers became Kings of Sweden, one after another). Her life changed overnight, when two powerful monarchs and a French adventurer cast a net throughout Europe, choosing a bride for the heir to the Russian throne. Count Jean Armand de L’Estocq kept getting in trouble and ending up in jail for having “affairs d’amour” (love affairs) with unavailable ladies, so to speak. Fortunately, he had friends in very high places. Madame de Bourbon, daughter of Louis XIV of France and marquise de Montespan, a powerful and intimate friend, pulled him out of French jail and got him a position of a court physician in Russia. Wouldn’t you know, he promptly got into the same hot water and again ended up behind bars, by order of Peter the Great himself.  However, after Peter’s death, the royal widow, Empress Catherine I, promptly freed her favorite doctor and restored him to his former position. A seasoned seducer became fast friends with Princess Elizaveta, the future Empress, and continued having tremendous influence on her during her reign. He was the one who focused Elizaveta’s attention on Sophie of Anhalt-Zerbst, the little provincial princess, with no money and little beauty, but a peerless pedigree. He also sold this deal to Frederick II of Prussia. Sophie, accompanied by her mother, arrived to the Russian Imperial Court to audition for the part. 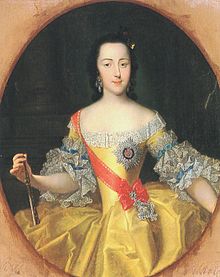 Actually, this was not the first time fifteen-year-old Sophie and sixteen-year-old Karl Peter, Duke of Holstein-Gottorp, met each other. She had been introduced to the Heir five years ago, when they were ten and eleven, respectively, and, as she wrote in her diary, found him “detestable.” Oh, but now the situation was different! The clever teenager, having decided “to do whatever was necessary, and to profess to believe whatever was required of her, to become qualified to wear the crown,” as she wrote in her memoirs, went out of her way to become Empress Elizaveta’s favorite and to “out-Russian” the Russians in all Russian ways. She was received by Russian Orthodox Church under the new name Ekaterina, or Catherine. Tutored by Count Lestocq, as he was known in Russia, she became adept in other ways as well. Unfortunately, the only person who detested her as much as she detested him was her husband, the future Emperor Peter III. It is said that none of her children were fathered by him. Certainly, he denied paternity of his heir, the future Emperor Paul I. It is estimated that during her long reign she had twenty two lovers.

Undoubtedly a great monarch, renown as “the enlightened sovereign,” a patroness of arts and culture, a reformer of public education “for both sexes” who opened the first in Europe institution of higher learning for girls (the Smolny Institute) and corresponded with Voltaire, Catherine felt free to choose young lovers whom she promoted and enriched at dismissal. In turn, they remained loyal to her throughout her entire life. No wonder her private life is surrounded by all kinds of rumors. Was she involved with her favorite Grigory Orlov and his brothers in a conspiracy to kill her husband Peter? Maybe, or maybe not.  Was she a nymphomaniac? By today’s standards, not at all. Even by the standards of her times, any male monarch would have mistresses by the dozen parading through his bedroom – it was expected. But a woman is accused not only of promiscuity, but of bestiality! No, Catherine the Great was not killed by a stallion while having a romantic relationship with him! And no, contrary to Elvis, she did not die on the toilet. She suffered a stroke while in her bathroom, was carried to her room, and expired in her own bed. 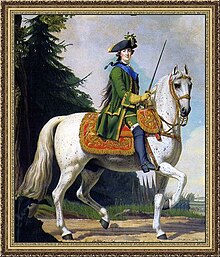 A tomboy to the end, she was a woman of simple tastes in food. She liked boiled beef with pickles and cutlets made of minced game meat (http://rbth.com/arts/2014/07/09/monarchs_menu_feasts_fit_for_russian_tsars_and_emperors_38051.html).  While she preferred meat, her efforts to be completely russified became second nature. The Empress loved Russian blini, and not simple blini of which there is a huge variety, but the famous Tsar Blini. I found the original recipe in an old Saint Petersburg cook book. Imagine:

Now, scroll back up and look at the portrait of Catherine the Great in her 50’s. No wonder she gained a little weight! And nobody dared to put the Empress on a diet…

Since my husband could also benefit from a diet while enjoying these dainty, airy creations, I used my “best flour” – organic white spelt flour. If you have a celiac disorder or an allergy to gluten, it could be easily replaced by gluten free flour. Instead of 30% fat cream (scary!), I used soy prostokvasha (for recipe, please click here).  Instead of refined sugar, I used agave, and just added some vanilla extract for flavor and baking powder for extra fluff. But what about those 10 eggs?

Aquafaba (liquid left from cooking chickpeas) has worked for me before, and it worked in this case, too! I whipped it real well, then introduced the rest of the ingredients, and fried on medium hot, barely misted with oil frying pan.

A word of caution: these blini are so fragile that you shouldn’t  even try to pick them up with a spatula. You need to fry them on both sides, so flip them onto a plate and slide them back onto the frying pan, one by one. When done, slide them onto the serving plate.

Here is my husband enjoying a healthy and dietetic brunch, fit for Tsars. Just like Catherine the Great, he has filled his blini with a fruit puree, in this case, my sugar free blueberry sauce. Blinis are finger food, even the fancy royal Tsar Blini, so become an Emperor or Empress for a day and dig in!