These pastries are called Hamantaschen. We can no more imagine the holiday of Purim without them than without the graggers – noisemakers gleefully shaken by children and adults alike to drown the name of the evil villain Haman.

That’s a story of Purim in a nutshell. Once again, the Jewish people, marked for wholesale slaughter, were saved through the good offices of the beautiful and pious Queen Esther and her uncle, the wise and righteous Mordechai. To commemorate this event, we read (or at least listen to) Megillas Esther (the Scroll of Esther) where the entire story is recorded in minute details. Every time when Haman (may his memory be erased forever) is mentioned, we make all kinds of noises, and not necessarily by using traditional graggers that look like this:

…but also anything that makes loud noises. I play castanets. A friend of mine, a very reserved lady during the rest of the year, imitates various animal sounds. You can stomp your feet, clap your hands, and generally make a total fool of yourself, but make sure you produce ear-splitting noise!

Talking about ears, in Hebrew these triangular pastries are called oznei Haman – Haman’s ears. How did that happen? I grew up with a story that, after Haman and his ten sons had been hanged, their ears were cut off, to be sent to different cities as proof of victory. Really? Is that was Jews did – cut off the dead guys’ ears, neatly packaged them in ice, and shipped them around by UPS?

Of course not! Like many other legends, this one was born of jumbled together bits and pieces of information. One of the most venerated – and the most delightful! – Purim traditions is Purim shpil, a play or a skit where the Purim story is retold in a funny way, just as you saw in the video. It is in a sixteenth century Purim shpil, performed in Italy, that the sweet treats were called oznei Haman for the first time, and the joke morphed into a mutilation legend and gradually spread throughout Europe. Actually, little stuffed dumplings have been called “ears” in Italy way before this unfortunate jest, as described by Rabbi Don Yitzchak Abarbanel.

Fine, no cutting ears off, so what are hamantaschen? Why are they so important that we have to spend hours fashioning those triangles and hiding poppy seed filling inside? Can’t we just bake cookies and be done with it? Obviously, the first part of the word looks like the name Haman. In the video, he is wearing a tricorn, to demonstrate yet another meaning of the pastries’ shape – Haman’s hat. However, tricorns had definitely not been fashionable in ancient Persia about 2400 years ago.  Most likely, the vicious Jew-hater looked like this:

There is one telling detail in the story: even though Haman offers the king a fantastic amount of money, a tremendous fortune, in return for the death sentence for all Jews, he stands to gain it all back plus a lot more by confiscating their properties and belongings. Remember what the Nazis did? Same idea. The guy is investing his entire fortune in order to line his pockets with a much larger one. In Yiddish, tasch means pocket, so it’s not ears or hats, but Haman’s pockets we are baking every year, pockets stuffed with Jewish gold drenched in Jewish blood.  Why would we want to do that?

Even though today hamantaschen are made with all kinds of different fillings, the traditional one is poppy seed – mohn, in Yiddish, which makes the pastries “poppy-seed-filled pockets.” Now, what’s so special about poppy seed? The Talmud explains that, since Queen Esther did not disclose her identity (incidentally, one of the Purim customs is wearing masks), she couldn’t have kosher food prepared for her, but neither would she eat non-kosher food. Consequently, the poor Queen became the first raw foodie in history, subsisting solely on seeds and nuts. No wonder she had such a slender figure!

However, the word tash in Hebrew means “weaken” – we believe that G-d always weakens our enemies, as He weakened Haman and his entire evil family. The three corners of the pastry remind us of a pivotal moment when Haman recognized the spiritual strength of our forefathers, Avrohom, Yitzchok, and Yaakov. This is when he weakened, and this is when he lost. Oh, but only a small part of the Jews lived in Shushan, the capital. The rest were dispersed throughout Persia. Lacking Internet and cellphones, they didn’t even know that they had been in danger! “They are going to kill us all? No way! Why? They’ll probably just relocate us to a safe place…” Sounds familiar? Remember the Nazis?

Prudent Mordechai kept sending them messages hidden… in cookies. He must’ve figured that sweet pastries will make a scary message more palatable. But there is a deeper significance to this “hidden sweetness”: G-d is not mentioned in Megillas Esther. He operates “behind the scenes,” so to speak, but the sweetness of the filling reminds us that He is ever present for all His children (www.chabad.org).

These are soft and fluffy hamentaschen, rather than the cookie dough ones you see everywhere on Purim. This is how my grandmother made them, this is how my father loved them, and this is how I made them for him every year, after we lost my mother. I have not figured out a way to make them healthy by substituting a different flour, a sugar substitute, or a vegan egg. Once a year, on Purim, I can go all out and indulge!

This is time consuming, like every yeast dough, but actually pretty easy. In one bowl, mix all the dry ingredients: flour, sugar (there isn’t really all that much sugar!), a little bit of salt, and active dry yeast. In another bowl, whisk an egg with olive oil and warm water. Then gradually add dry ingredients to wet, gently folding them in until fully incorporated. 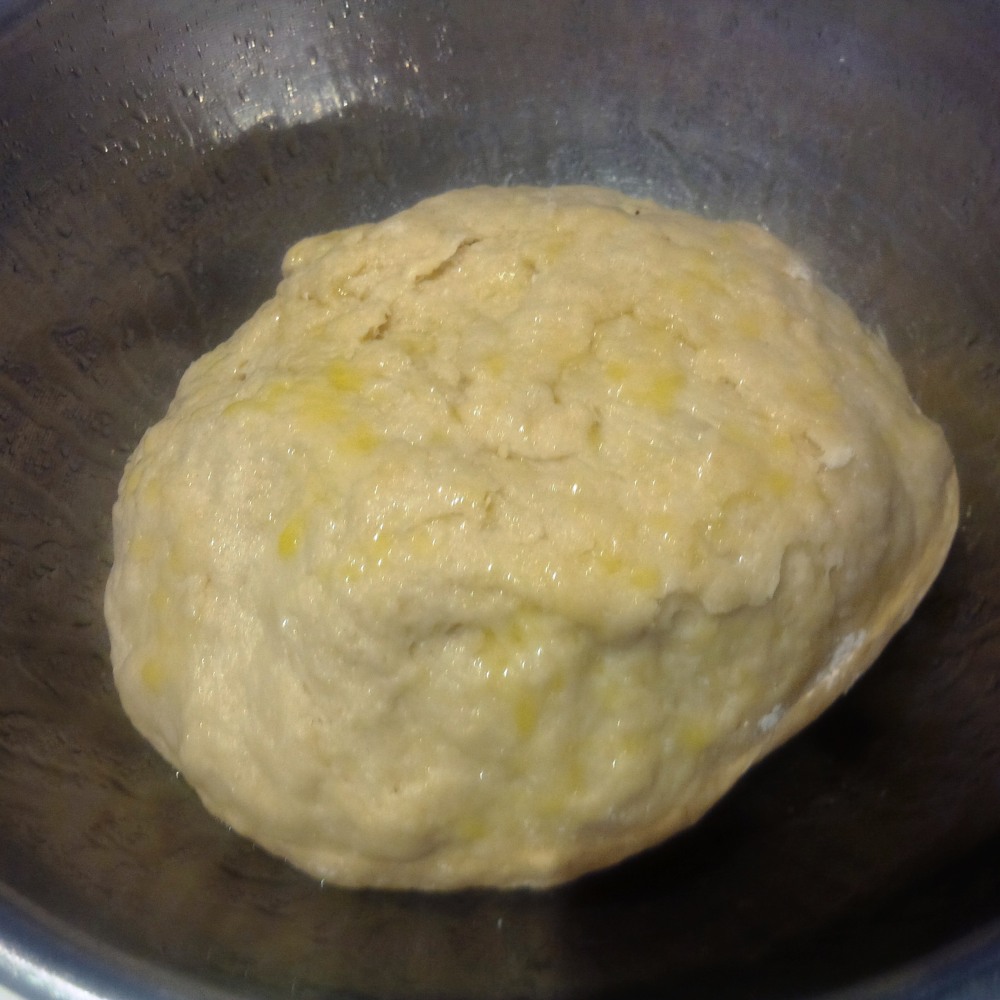 Turn the dough over to a floured board or working surface and kneed for about five minutes. Take a large bowl, spray it lightly with oil, place your dough into it, and spray some more oil on top. Now cover it and let it rest until it doubles in size. It should take about an hour, depending on the temperature in your kitchen. Meanwhile, I am sure you have things to do!

Once your dough is ready, turn it out on a floured surface and punch it down. Divide it into four parts, and work with one part at a time. Using a rolling pin, roll it out to about 1/4 inch (3/4 cm) thickness. Get your filling ready. I made mine with chocolate – are you surprised?

Use a cookie cutter, a glass, or a measuring cup to cut circles. One fourth of the total dough should give you seven to eight circles. Place a teaspoon of filling ( in my case, chocolate chunks, but you can use chips, or you can use any filling you like!) in the center of each circle and seal them completely as triangles. Place them on a lightly misted with oil cookie sheet seam down, giving them a little space to grow, cover them, and again let them rest until they double in size. That should take another hour or so.  If you don’t have anything to do, which I doubt, go write a post!

My hamentaschen look nice and plump, so it’s time for them to go get baked. Before they do, though,  whisk an egg with some water and paint them with egg wash. I was really planning to sprinkle them with poppy seed, as the tradition demands, but couldn’t find poppy seed anywhere. I opted for sesame seeds instead -as long as I have seeds, I am still honoring Queen Esther’s staunchness. In they go for about thirty minutes.

They come out nice and plump, but to abide by my own Rule of Dessert #2 – The more chocolate, the better! – I will drizzle some chocolate syrup on top. Purim is a fun holiday, a masquerade, and I will be wearing my Venetian cat mask. This is not the real Megillas Esther, of course, but a gift box filled with hamantaschen, candy, and other treats. I am preparing several of them to give out to friends and family, and the little gragger next to it is a part of the gift set. It is commanded to send these gifts, “filled with portions of foods” on Purim, to make sure everyone is in a festive mood. We wish each other, and everybody else, to rejoice  – happy holiday!