Are muffins bread? Are they cakes? Are they supposed to be eaten for breakfast, lunch, snack, dessert, or all of the above?

Are muffins really cupcakes without frosting? Thomas Jefferson thought so, and called muffins “a luxury to us.” Today, you can get a recipe for Monticello Muffins at www.monticello.org.  But those are not American muffins, tall, soft inside, but with a crispy crust. They are English muffins, yeast-based and flat. Still, in the colonies, they were a novelty and a luxury.  In England, though, they probably arrived from Wells together with the most miserly and avaricious, as well as the most unlikely king who won the throne by defeating King Richard III at the Battle of Bosworth Field. Poor Richard, much maligned in history, hadn’t been able to trade his kingdom for a horse and ended up forfeiting the crown together with life.

Henry Tudor, or Harri Tudur in Welsh, became King Henry VII “by right of conquest” on the strength of his Welsh ancestry and Welsh army and thus ended the War of Roses, or the Cousins War. Having been brought up by a fanatically religious, ascetic mother far from an extravagant  Edwardian court, he preferred simple but nourishing ancient Welsh food – bara (bread), small round yeast cakes baked on maen (bakestones).

The Red Dragon of Cadwaladr, symbol of the Tudors’ Welsh roots, did not have a long tenancy on the throne of England. Elizabeth the Great, the last Tudor monarch, dies childless, and King James VI of Scotland, son of poor Mary Stuart, the unfortunate queen who lost her head in her fight for the English crown, gets the crown handed to him for lack of any other heirs. The Jacobean era thrives in literature, arts, and culture, but debts, inherited from the Tudors, plague the country for years, throwing it into economic depression, and culminating in a real, bubonic plague. Shakespearean “Tempest” written during this time, could be a metaphor for James’ reign.

Houses from which bodies were removed would be boarded up, to prevent spreading of the disease. Any inhabitants who were still alive, were left inside with no food – why waste food on those who would soon be dead anyway? The very few fortunate individuals who survived stayed alive due to a bizarre combination of two factors, muffins and tobacco.  Muffin men traversed the town streets, ringing their bells (Oxford Companion to Food, A. Davidson, 1999). They did brisk business, accepting coin lowered on strings through cracks between boards and delivering flat muffins the same way, protecting themselves (or so they believed) by… smoking pipes!

It was during James I’s reign that England “acquired the nicotine habit” (Wikipedia) thus enabling Virginia colony to prosper.  The King was so incensed that he authored A Counterblaste to Tobacco:

Have you not reason then to bee ashamed, and to forbeare this filthie noveltie, so basely grounded, so foolishly received and so grossely mistaken in the right use thereof? In your abuse thereof sinning against God, harming your selves both in persons and goods, and raking also thereby the markes and notes of vanitie upon you: by the custome thereof making your selves to be wondered at by all forraine civil Nations, and by all strangers that come among you, to be scorned and contemned. A custome lothsome to the eye, hatefull to the Nose, harmefull to the braine, dangerous to the Lungs, and in the blacke stinking fume thereof, neerest resembling the horrible Stigian smoke of the pit that is bottomelesse (1604).

The royal admonition went unheeded, and Englishmen got seriously addicted to “the filthie noveltie.” By 1612, London had 7000 tobacconists and smoking houses (ibid.); that’s way more than Miami with its cigar culture!

Fluffy and moist American muffins are actually quick breads, made without yeast, but instead leavened by a chemical reaction, as explained in the first cookbook published in the U.S. (American Cookery, A. Simmons, 1796).  I set out to make them gluten free by using coconut flour and eggless by substituting aquafaba (liquid left from cooking chickpeas). The leavening agent is baking powder which was developed even later, mid-19th century. Smart Balance to make them buttery, agave to sweeten, a splash of vanilla extract for flavoring, and we are ready for the traditional American “luxury” of huge juicy blueberries. James I in his rage against tobacco blamed native Americans, but we are grateful to them by introducing blueberries to the colonists.

We mix coconut flour with baking powder, whisk aquafaba with melted Smart Balance, agave, and vanilla, and combine wet ingredients with dry until smooth. Then we gently fold in those luscious blueberries.

I bake them in my little muffin machine and try not to forget to sprinkle some coconut shreds on top of each before I close the lid. It takes exactly seven minutes for each batch. It’ll take about 15 – 18 minutes to bake all of them in the oven at 400 F. 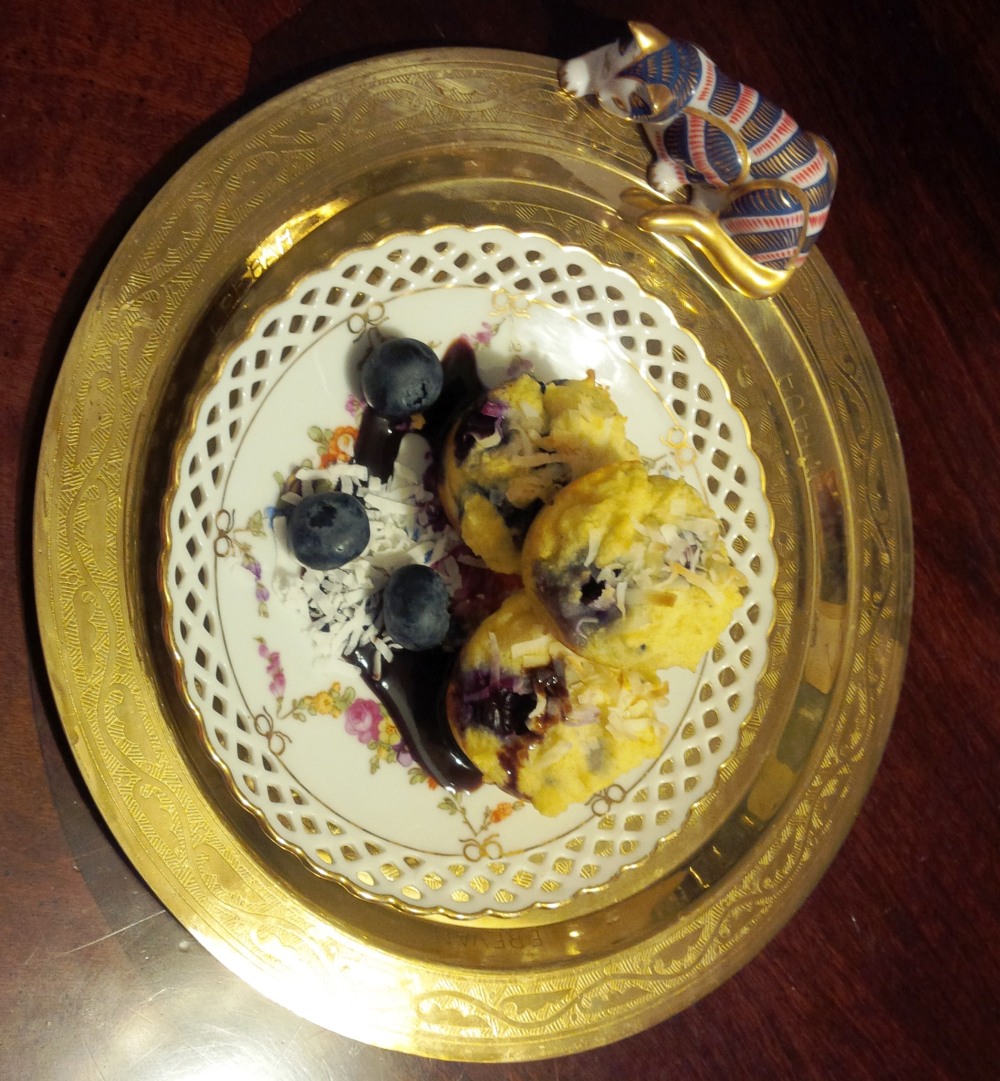 We eat them for breakfast, lunch, snack, dessert, and just because they are there! My husband just picks one and pops it in his mouth any time he passes by. So I am asking you, Beautiful People: we gave England tobacco, and in return, they gave us muffins – who got a better bargain?

Useful articles and tips if you want to lose weight.

Life's Ephemera in Ink and Pixels

The best travel content you can get as a human

When The Soul Writes

A Place For Readers

clairvoyance, coincidence, & what have you

Suzanne's Life and Travel Musings from New Zealand and Beyond

Featuring the Watercolours of Lance Weisser

Careening through life and learning stuff

A deaf person who has been pleasantly stuck in a dimension between dream and reality, where my sign language turns into written poems.

my soul echoes to all winds

Where You Taste The Love

Notes from the cupcake rescue league

-Reviews, Advice & News For All Things Tech and Gadget Related-

The answer to the age old question, “what the hell is wrong with you?”

Exhortations from Psalms and other books of the Bible! Paraphrases, information, etc!

Primrose Stuart
Travels and Tomes: One Expat's Amblings and Ramblings

About travel, food, family, and the quirks of living abroad in Germany, England, and Turkey.

This site is about the knowledge of different categories such as education, , health, mobiles, and tourism