One of those names that varied from country to country, it was called Spanish Toast in Germany, German Toast in Italy, Nun’s Toast in Spain, Amarilla in South America, and Poor Knights of Windsor in England, with translations of the latter into Swedish, Danish, and some more European languages. The reason for it, presumably, is that in Medieval England, knights, contrary to common folk, were supposed to be served dessert after dinner. Not all of them possessed the shining armor, though, and some knights were as poor as the proverbial mouse. Dunking bread into milk, enriching it with eggs, and frying it was their innovative way of solving the problem. They slathered it with jam, and – voila! – dessert was served. 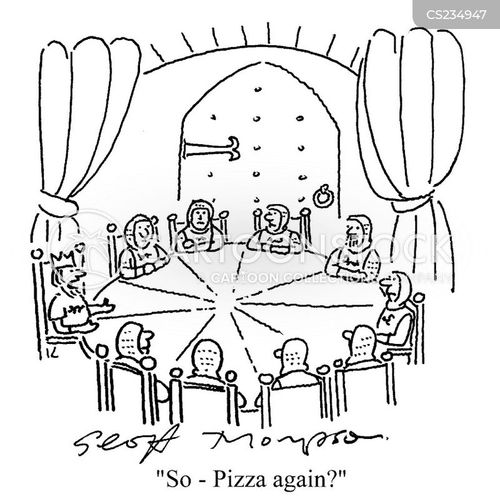 You are witnessing history in the making: King Arthur is sick and tired of pizza, and Sir Lancelot is about to give instructions to the cook to make the toast!

But what about France? After all, “French toast is a dish we have borrowed from the French,” insists Craig Claiborne in The New York Times Food Encyclopedia (1985). That may be so, but don’t expect to find French Toast on a menu in France. There it is called pain perdu – lost bread, which is a French euphemism for stale bread.  Apparently, frugal medieval cooks went out of their way trying to save every crumb and, with fabled French culinary savvy, created this delicious breakfast treat. Originally, though, they called it Pain a la Romaine – the Roman Bread.  And now we are getting closer to the true story. 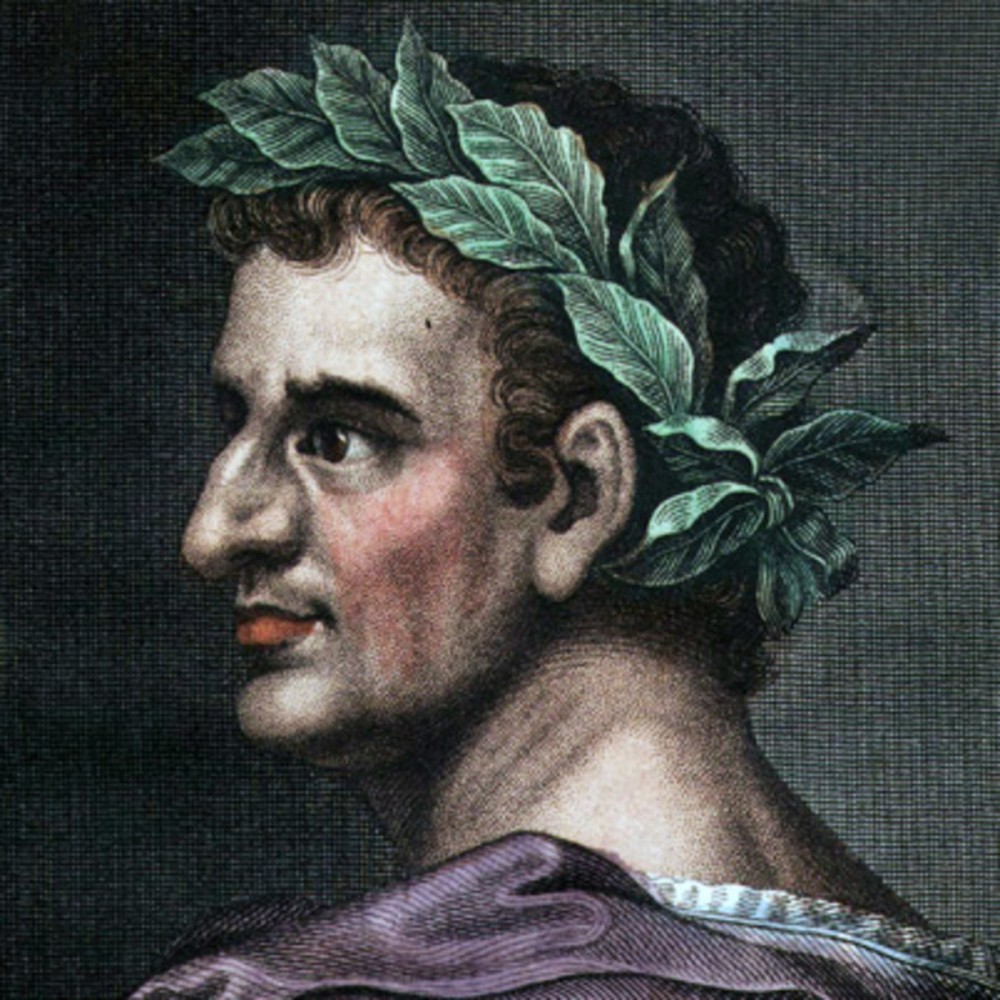 Roman emperor Tiberius started out on the cusp of the millennium as one of the greatest generals Rome has ever seen. No wonder his father-in-law, who was also his step father and adoptive father (it’s pretty confusing, I know, but ancient Romans adoption laws were designed to serve political purposes, rather than children’s welfare), made sure Tiberius succeeded him  on the throne. Papa Augustus wanted, and Tiberius dutifully obliged, but the luxury and decadence of imperial Rome circa 1st century C.E. was not to his liking. While trying to do his best among plots and intrigues, he gradually became “the gloomiest of men, ” according to historian Pliny the Elder.

His son Drusus, though, was gallivanting around Rome with an infamous “lover of luxury,” whose name eventually became synonymous with “gourmand,” Marcus Gavius Apicius. Flashing massive rings with huge precious stones, drunken Drusus ate up Marcus’ undisputed culinary judgments regarding, for instance, cabbage tops which were not fitting to be eaten by patricians since they were “common food.” Apicius was “born to enjoy every extravagant luxury that could be contrived” (Pliny the Elder). According to the philosopher Seneca, he spent 100 million sestertii to build his kitchen, then he spent all the gifts he had received from the Imperial court (courtesy of his buddy Drusus) on a spectacular housewarming party. Waking up the morning after, Apicius toted up his bills and realized he had only 10 million sestertii left to his name. Poor guy! Having found himself on the brink of poverty (10 millions – pocket change!), he poisoned himself.

Drusus also died of poisoning which was quite a common malady in those times, although it was unclear whether he was poisoned by his loving wife Livilla or accidentally overdosed on bitter almonds he used to gobble up as a remedy for drunkenness. Almonds or cyanide, emperor Tiberius’ only son was dead, and the emperor went into total depression, left Rome, secluded himself , and adopted his grand-nephew Caligula as his grandson and heir. Peter o’Toole portrayed the last days of the aging emperor, mad with grief (and possibly syphilis as well) in the film Caligula. You might have met Malcolm McDowell as Caligula in one of my earlier posts (please see here).

It is pretty obvious that this kind of decadence and depravity (Caligula is not a film for family entertainment!), signaled the beginning of the end, “decline and fall of Roman Empire,” aptly named so by Gibbon. Apicius, claimed Seneca, “corrupted the age with his example,” thus adding a weighty stone to a grave of the once glorious empire. Before poisoning himself, though, he supposedly managed to author a cook book filled with recipes some of which are still used today. To be honest, it is unclear that he actually wrote it, but it has been circulating under his name for two thousand years, and under the title “Another Sweet Dish” we find the following:

“Break [slice] fine white bread, crust removed, into rather large pieces which soak in milk [and beaten eggs] Fry in oil, cover with honey and serve.” (The Food Timeline) 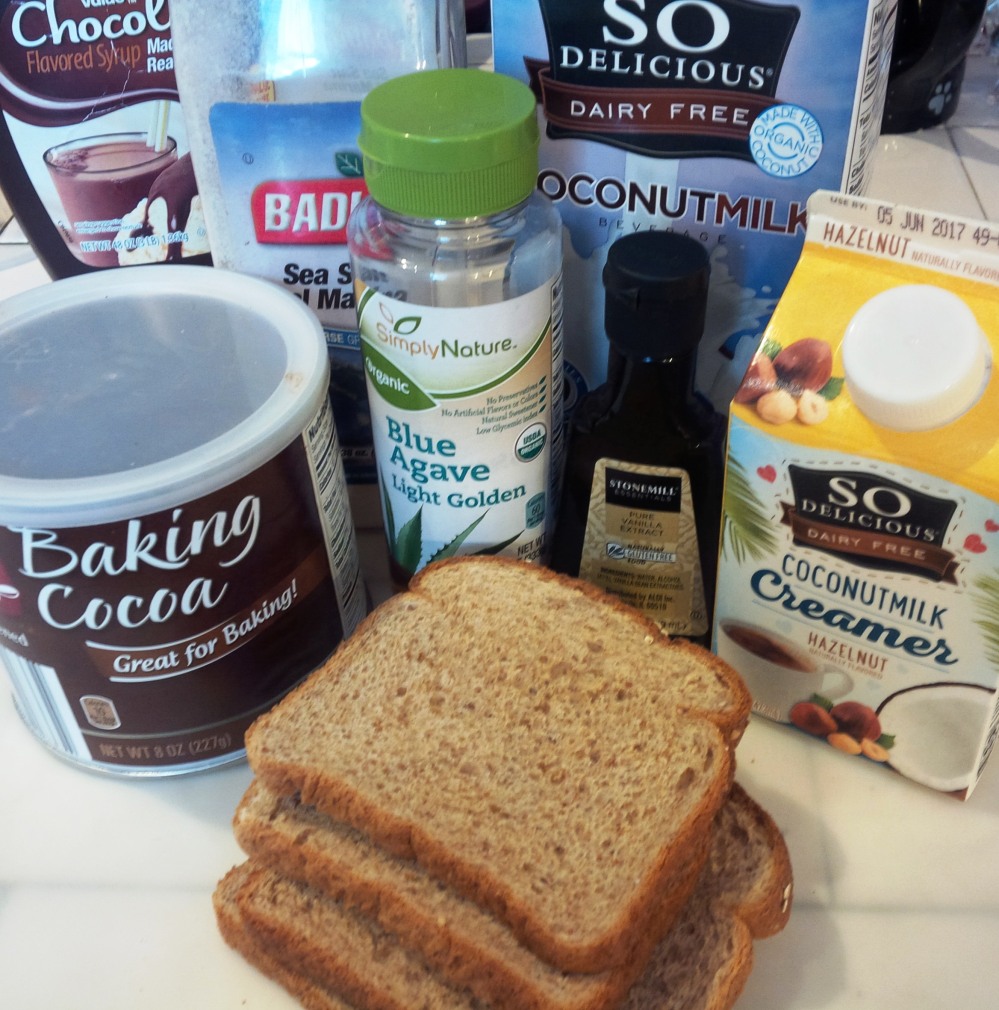 Let’s do what the famed gourmand said, with a few modifications: take a few slices of my homemade spelt bread (if you are allergic to gluten or have a celiac disorder, you can use gluten free bread), coconut milk and coconut creamer (hazelnut flavored creamer adds a nice nutty nuance), agave for sweetness, and a dash of vanilla extract for flavor. Because it’s my kitchen, and not the Apicius’ 100 million sestertii one, I make my own rules, and Rule #1 states: It’s not a dessert if it’s not chocolate. Therefore, I add cocoa powder.

Instead of eggs, I whip aquafaba into foam, gradually add the rest of the stuff, and whip it together, then I soak bread slices in this foamy liquid.

Meanwhile, I melt coconut oil on a preheated frying pan and fry the slices for about 2 – 3 minutes of each side. 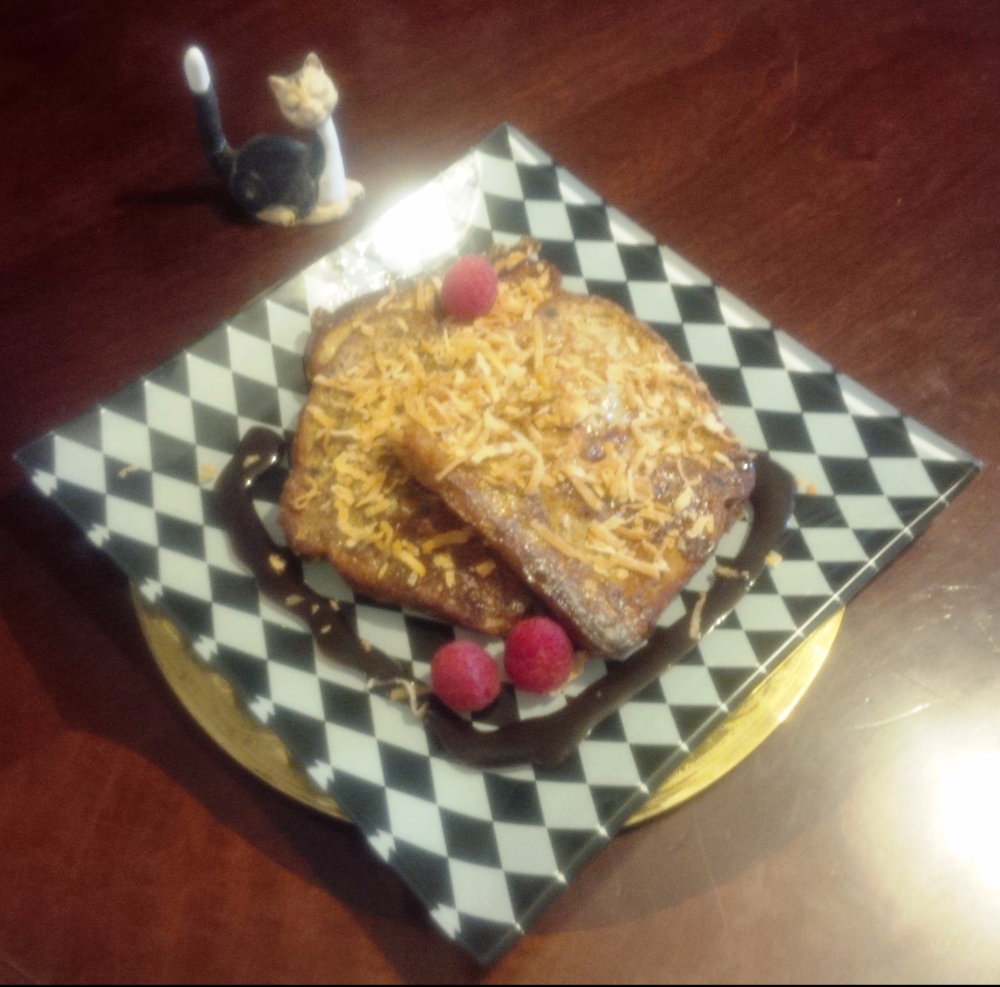 Since my Rule #2 is: The more chocolate, the better, I serve these choco-coco slices with chocolate syrup, garnished by toasted coconut flakes and fresh berries. Ah, to taste the decadence of Rome right before it fell!