Poaching salmon in wine is not new. The way I am doing it, though, is different from myriads or online interpretations. It’s not by choice, though, but rather, it is a case of inventiveness prompted by necessity.  In my grandmother’s house, Friday night dinner was always pareve. Contrary to what many consider a Jewish tradition, there was no meat on the table on Friday night, unless it coincided with a holiday. However, there had to be three different kinds of fish. According to my grandmother, the symbolism of the undeniably traditional Jewish gefilte fish lies in the combination of three kinds of fish used to make it, as they represent the three avos, Avrohom, Yitzhok, and Yaakov who swim like fish in the waters of Torah. Well, gefilte fish was served with appetizers, but what about the main course? That also had to be fish, by default, as there would be no meat. Anyway, said my grandmother, not everybody knows to make gefilte fish of three fishes; some only use two, which makes it important to serve another fish dish.

In this custom, as in many other customs, I try to follow my grandmother’s ways. Trying to bring variety to my table, I fry, and I bake, and I boil, and at some point I have realized that poaching presents an interesting logistical challenge. First given: anything served on Shabbos has to be cooked before Shabbos, or at least somewhat cooked.  Second given: from the time food is placed in the oven before Shabbos to the time a main course is served at least an hour and a half elapses, if not two hours. Start simmering fish in liquid before Shabbos and then keep it in the oven for two hours, and your fish will be dead and dry as a bone! After much thought and a little experimenting, this idea evolved.

Cut salmon fillet into portions, the size of one-person portion common in your house. Wash and seriously dry by patting it with paper towels. Dry the skin too, don’t forget! 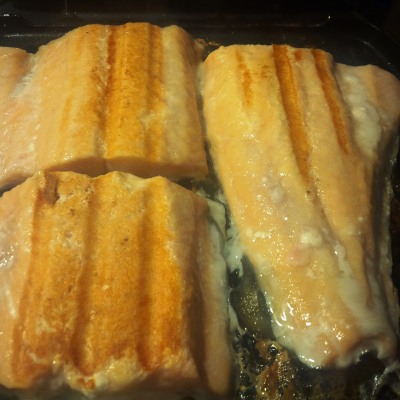 Fire up your grill, lightly mist it with oil, and place pieces of salmon on it skin down. All you need is three minutes, and it actually becomes edible, which satisfies the requirement for Shabbos food, but not very attractive because it hasn’t had that drink yet. There is an obvious lesson in all this: to become attractive, one shouldn’t be half-baked, but rather, one should have a drink to complete the image. If you don’t have a grill or griddle, searing it on a barely misted pan or broiling under fire for a couple of minutes will do the trick.

The drink today is Victor Chardonnay Lazio 2014, light and dry, with a subtle apple flavor. If you want your salmon – and your guests! – happy, don’t skimp on wine. I don’t dilute wine with water (that’s a perversion!), but a splash of lemon juice will only enhance the fullness of salmon taste, while eliminating the aftertaste of Omega-3 (FIsh oil, good for you health, not so good on your palate). Salt and fresh ground pepper are necessary, but I also add capers and fresh basil leaves torn into small pieces.  Remove salmon pieces from the grill, place into a lightly misted with oil baking pan, and give them a drink: pour wine over them, add some lemon juice, throw around capers and basil leaves, sprinkle salt and pepper, and let them enjoy themselves.

It could even be done the day before, as long as the pan with drinking fish is covered tightly and refrigerated. Now it could be popped into the oven which I set at 175 for Shabbos and served two hours later. 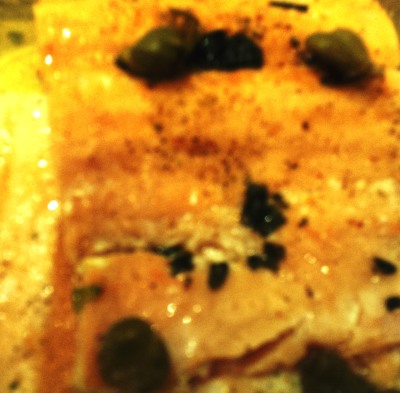 And if you keep it tightly covered, it will be really poaching, i.e. slowly simmering in a very small amount of liquid. This way, you are happy that it is prepared the right way for Shabbos, your guests are happy when they are served this fancy-looking delicious main course, and the salmon pieces are happily drunk in the privacy of their own pan.

If you transfer it to a serving dish, make sure to spoon the remaining wine infused with lemon and basil flavors over the fish. Most of the time, I serve steamed or barely cooked spinach on the side, as it nicely complements the delicate flavor of poached salmon. For recipe of Barely Cooked Spinach, please click here.  Have a chilled glass of the same wine that your salmon had been drinking and think how little effort it had taken to get this fish deliciously drunk!