I have been getting feedback about my stories. It seems that you, beautiful people, like my stories more than my recipes. Surprising development; however, here is a very strange story about a very simple recipe, so simple that, according to one Russian chef, even a total novice will not manage to get it wrong. It’s called Macaroni a la Sailor, or Macaroni Sailor Style, or Macaroni Po Flotski, or even as one word Poflotski (the latter came from an American website). It is already not exactly so because, even though both military and commercial fleets are called Flot in Russian, sailors of a military fleet in English are called Navy, and all the different legends about the origin of this dish agree in one detail: we are taking about Russian Navy, not commercial fleet. In that case, shouldn’t it be called Navy Style or a la Navy? Oh well, since it seems to be known by the Sailor name, we’ll let it be.

Legend #1, the most ridiculous.  A few years ago, Wikipedia attributed the authorship of this dish to one Charles Floats, thus “po flotski.” Following extensive research conducted by several irate Russian chefs and food historians, it was proven that Charles Floats was a myth, a product of mystification who never actually existed, and all references to him were removed from Wikipedia.

Legend #2, linguistic. The dish – and the name – was derived from a medieval Italian recipe that combined macaroni with meat. It was called Pasta Fiottarini, and in Russian pronunciation it morphed into po flotski.  The same irate Russian chefs and food historians hit the sources again and this time, they did find Pasta Fiottarini mentioned… as Cucina russa – the Russian cuisine. It is described as pasta con carne macinata fritta, or pasta with fried meat, which is almost an exact description of Macaroni Po Flotski. 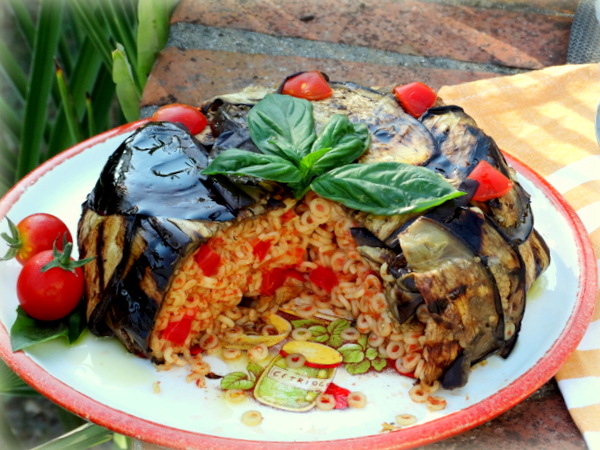 Legend #3, geographic. We find the same famous French chef Careme who had switched allegiances from Napoleon to the Russian Tzar Alexander I, but he is already in England, employed by the future King George IV. You’ve met this well-traveled chef in my post Apple Charlotte. The year is 1817, and at a royal banquet Chef Careme is serving four soups, then four fish dishes, and then four incredible edible centerpieces (pieces de resistance) accompanied by 36 (thirty six!) entrees. One of those entrees is La Timbale de Macaroni a la Napolitaine  (Anna Del Conte On Pasta, Pavilion Books, 2016).  Sounds terrific, but Timbale means drum, and the entree, as you can see, is shaped like a drum, in a pie crust or, as a classic Sicilian version, in eggplant. Although definitely medieval in origin, it is rather a predecessor of lasagna, and it bears a striking resemblance to Russian Lapshevnik  (thefoodtable.com). The meat is not mixed with pasta but layered, lasagna-style.

Legend #4, revolutionary. You know about the mutiny on Battleship Potemkin.

If you haven’t seen “the greatest film of all times” by Sergei Eisenstein, here is your chance, an entire hour and thirteen minutes of it. Make plenty of popcorn.  In 1905, when the unrest of the masses was brewing all over Russia, sailors of the battleship Potemkin refused to eat rotten meat swarming with worms, declaring that “even a dog wouldn’t eat that!” The ship’s doctor, upon examining the meat, asserted that the creepy-crawlies were not worms, but maggots, and maggots could be washed off.  According to the Odessa legend, the meat was then ground, fried with onions, mixed with macaroni, and served to the sailors who refused to eat it.

Actually, according to ship logs, the rotten meat was used to cook borscht, and that’s what the sailors refused to eat.  In fact, the body of one of the leaders of the revolt who had been killed in a skirmish with officers was placed by his fellow crew members on the famous Odessa stairs with a sign that read For a Spoonful of Borscht.  The well-known massacre on the stairs ensued, which you can see in the movie. However, you can’t daunt Odessa when it comes to legend-making! Everybody – but everybody! – in Odessa knew that after it was cooked in the borscht, the meat was taken out of the pot, ground, fried with onions, etc. What, you doubt it? You must be a tourist. You must’ve come from Moscow, or something, so what do you know from Odessa? Well then, go and see for yourself. What do you mean, where? To any workmen or student cafeteria, where else! They take a piece of rotten meat – good meat is taken home or sold privately, you understand! – cook it in a borscht, then take it out and make Macaroni Po Flotski. Tomato sauce in the Borscht and fried onions in Macaroni cover everything, right?

Sure, cafeteria cooks did that during the Soviet era, but the Potemkin cook? No way! And there is a good reason for it. Pasta was not part of the Russian Navy food rations at that time because it was too expensive. Hard to believe, but if you think about it, grains and legumes are cheap – they grow. Pasta doesn’t just grow; it needs to be produced. Before the revolution, Russia was an agrarian country where anything that required production entailed astronomical production costs. The price of macaroni in 1901 was the same as the price of meat. Who would even think of feeding this delicacy to sailors!

Legend #5. Punitive. As punishment for infractions, sailors were assigned to tedious meaningless tasks. One of those, supposedly mentioned in the Russian magazine “Science and Life,” was to stuff macaroni with ground meat. Picture canneloni the size of penne or ziti and visualize stuffing them. Have fun!

Most of this information comes from a great Russian culinary site

http://recept.domovest.ru/  Those of you, beautiful people, who read Russian, are lucky; but if you don’t, never trust Google Translate!

And now for the truth. Nobody knows where the name came from, but the indisputable historical fact is that Odessa was founded by a decree of Catherine the Great in 1794, and three years later, in 1797, her famous favorite Prince Gregory Potemkin ordered the first macaroni factory to be opened there. It was owned and operated not by Italians, but by Frenchmen. Odessa climate was ideal for it because machines for drying pasta had not been invented yet.

Pasta would be hanged outside in the morning, like laundry, and taken back in at night. The process would take about 6 – 7 days, depending on the weather. The taste and aroma of it is described in contemporary sources as extraordinary, but can you imagine the price of it?  With the invention of machinery, macaroni factories proliferated and the prices gradually came down, but the name Macaroni Po Flotsky does not appear in any Russian cook books until 1955. I am looking through a 1952 book, and it’s not there yet; however, Lapshevnik is. 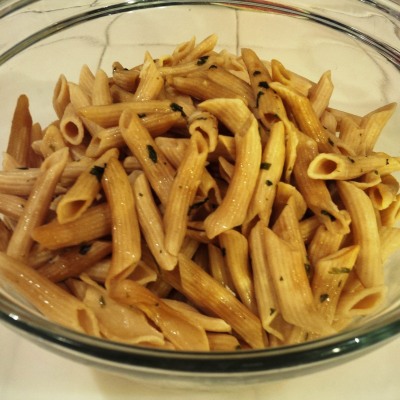 I am offering a meatless recipe, but the same exact thing could be done with meat if you boil it and then ground it with fried onions. Don’t fry ground meat as it tends to clump! First you cook your pasta, preferably penne or ziti, al dente.  I use whole wheat or multi-grain pasta, but you can use any pasta you like.  I’ve already sprinkled it with some olive oil and cilantro, but that is only in order for it not to stick while being photographed. 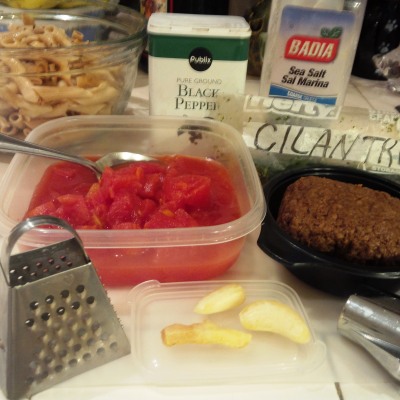 I use Tofurki ground beef substitute, but feel free to use whichever meat substitute you prefer. I also mix some diced tomato into it because meat substitutes tend to be dry. There are some recipes out there that include tomato sauce or spaghetti sauce, but a classic Russian recipe has no tomatoes. This is the basic difference between Italian pasta with meat dishes and this one. I do not use fried onions, but use lots of squeezed garlic instead, some grated white turmeric, and lots of fresh cilantro.

I crumble the meat substitute, dump all this into the pasta, salt and pepper it, and add a splash of my secret ingredient – sweet red wine. Mix it real well, and you have a dinner! All you need to do is reheat it before serving.

You can pop it in the oven, tightly covered, for 10 – 15 minutes on the middle rack at low temperature, or just stick it in the microwave and hit the “reheat” button. It will know what to do.

Sharing the Gospel and life lessons to encourage others

Scribbles from my notebook

The official blog for Michael Beyer, author of 'Catch a Falling Star'

About my life and everything else 🙌

A place for women to be and become

Get Lean and Healthy

The heavens are telling the glory of God; and the firmament proclaims His handiwork. Psalms 19:1

a collection of interviews and daily word prompts

adapt and learn together

Learn more about an artist that makes music, paints, and creates photography.

The best in crossfit shoes women

Before You Buy Store

Information for your best health and fitness.

Thinrr
Top Health Ideas for You

Inspiring Others By Example

Living The Best Keto Every Day

What is better than art and poetry?

A lifestyle and Photography blog

Information for your best health and fitness.

Yashica cameras and so much more!

Your engraving, awards and custom gift source in Calgary and area.

Descending into the Deep Sea!!!