When Oscar Wilde, at the age of 36, published his one and only novel The Picture of Dorian Gray, society was disturbed and the press was outraged. “Unclean”, “poisonous”, and “heavy with the mephitic odours of moral and spiritual putrefaction,” pontificated The Daily Chronicle. In the midst of the strait-laced Victorian age, Wilde calmly responded, “If a work of art is rich and vital and complete, those who have artistic instincts will see its beauty and those to whom ethics appeal more strongly will see its moral lesson” (Holland and Hart-Davis, The Complete Letters of Oscar Wilde). This statement clearly defined the emerging philosophy of aestheticism, of which Wilde was an ardent proponent.

Heavily laden with decadence, hinting at homosexual liaisons at the time when “love that dare not speak its name” was prosecuted under Criminal Law, the novel delivers Wilde’s message: beauty is the object of life, and art’s purpose is to guide it. As to the book, “The books that the world calls immoral are the books that show the world its own shame,” was his only answer to critics. Aestheticism was gaining popularity to such an extent, that Gilbert and Sullivan, the leading dramatic authors of Victorian era, wrote a comic opera Patience that was a sharp satire on poets, such as Wilde and Swinburne, as well as artists Rosetti and Whistler. The promoters of Oscar Wilde’s lecture tour in the USA made sure that it coincided with the tour of Patience, whose two main characters were poets with opposing philosophies, aesthetic, or idyllic,  versus moral, or fleshly, and both were reputed to have been modeled after Oscar Wilde. The tall, willowy elegant young man in a long coat, with a lily in his hand, his dark long hair flowing, was an instant hit with the ladies. So was the protagonist of Patience, Bunthorne, surrounded by “twenty love-sick maidens,” some of whom were not exactly young, not quite attractive, and not really maidens. The oldest and the least attractive, Lady Jane, expressed her despair in this famous aria:

I hope you enjoyed this rendition by the great contralto Anna Collins, Beautiful People, but meanwhile portentous Victorian clouds were gathering over the head of “the most charming aesthetician of all” (Cooper, Oscar Wilde in America). Following brilliant success of his best known play The importance of Being Earnest, he was threatened by the Marquess of Queensberry, creator of the modern rules of boxing and father of Wilde’s intimate friend Lord Douglas: “I do not say that you are it, but you look it, and pose at it, which is just as bad. And if I catch you and my son again in any public restaurant, I will thrash you.” “I don’t know what the Queensberry rules are, – replied the writer, – but the Oscar Wilde rule is to shoot on sight” (Ellmann, Oscar Wilde). Sadly, bravado did not save him from criminal charges of “Gross Indecency,” a Victorian euphemism for homosexuality. 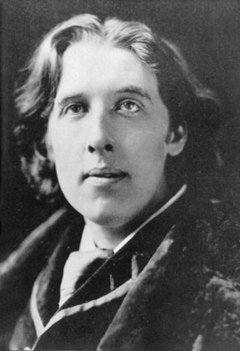 Pleading “not guilty,” Wilde responded to the prosecutor’s question, “What is “the love that dare not speak its name“?”

Wilde: “The love that dare not speak its name” in this century is such a great affection of an elder for a younger man as there was between David and Jonathan, such as Plato made the very basis of his philosophy, and such as you find in the sonnets of Michelangelo and Shakespeare. It is that deep spiritual affection that is as pure as it is perfect. It dictates and pervades great works of art, like those of Shakespeare and Michelangelo, and those two letters of mine, such as they are. It is in this century misunderstood, so much misunderstood that it may be described as “the love that dare not speak its name”, and on that account of it I am placed where I am now. It is beautiful, it is fine, it is the noblest form of affection. There is nothing unnatural about it. It is intellectual, and it repeatedly exists between an older and a younger man, when the older man has intellect, and the younger man has all the joy, hope and glamour of life before him. That it should be so, the world does not understand. The world mocks at it, and sometimes puts one in the pillory for it (ibid.)

And “put in pillory” he was, first subjected to public shame and ridicule, albeit not convicted, but eventually sentenced to two years of hard labor at the final trial. Deplorable jail conditions affected his delicate health and a trauma sustained during a fall contributed to his later death. The renowned poet, writer, and lecturer was not allowed paper and pens. Yet he lived up to his own bon mots: “Be yourself; everyone else is already taken” and “To live is the rarest thing in the world. Most people exist, that is all.” Upon his release in 1987, Oscar Wilde sailed to France, where he lived until his untimely death three years later. The memory of his dedication to art and beauty in life is still with us, as are his famous words: Art is anything one can get away with.

Here is my Oscar Wilde-inspired salad, Beautiful People. My husband said it was delicious, but it’s up to you to judge whether I got away with it.