When you think of meat on skewers, you probably visualize this:

Or, perhaps, if you are even slightly familiar with Georgian cuisine (a country, not a state), this:

And you will be on the right track: regardless of countless variations of it, shishkebab definitely has a long military history. I couldn’t help but share with you, Beautiful People, these simply superb excerpts from Aram Khachaturyan’s ballet Gayane performed by the famous Bolshoi ballet troupe. Of course, as you might have seen in some of my previous posts, the Georgians not only dance, they also sing in their own inimitable style:

“Suliko” was Stalin’s favorite song (may his memory be erased forever), but with everything he should be justly blamed for, it is probably not his fault that Shashlik (a Russian name for shishkebab) is erroneously considered traditional Georgian food. In truth, it is as much Georgian, as it is Armenian, Azerbaijani, or even – big surprise! – Ukrainian. Even the name itself has Slavic origins. This is how it happened.

It all started with Omar Sharif – ah, sorry! – with Genghis  Khan, of course, in second half of 12th century, when a baby was born clutching a blood clot in his fist. “A great leader is born,” proclaimed everyone in attendance, and they proved prophetic (The Secret History of the Mongols, author unknown). The son of a minor chief of one of nomadic clans roaming Mongolian steppes did, indeed, become the first Great Khan and founder of the Mongol Empire, possibly the largest contiguous empire in history.  A tireless, ruthless warrior, known as the genocidal ruler, Genghis Khan led his army across plains and mountains, conquering Georgia, Armenia, Kievan Rus, Volga Bulgars and the Crimean peninsula on one side, and a large chunk of Central Asia and China on the other. The invaders brutally murdered civilian population of the conquered lands; their sabers and spears knew no mercy, and the death toll exceeded millions. When hungry, they used the same spears to roast chunks of meat – whatever game they would catch or hunt while on the road to the next conquest.

The disintegrating Golden Horde empire was, a couple of centuries later, inherited by the Crimean Giray Khans who proudly called themselves “the Great Horde, the Great State and the Throne of the Crimea” (Mingaleev, Documents of the Crimean Khanate).  They considered themselves Genghizides (descendants of Ghengis), and ruled the Crimean peninsula and the adjacent steppes, including large parts of South Ukraine. Eventually coming under the protectorate of the Ottoman Empire, Crimean Khans established political, military and familial ties with the Turks. The great Sultan Suleiman the Magnificent’s mother, Ayşe Hafsa Sultan, was a daughter of Menli Giray, “Sovereign of Two Continents and Khan of Khans of Two Seas (ibid.)” They did like impressive titles, didn’t they!  In fact, the last Turkish Sultan Mehmed VI, who abdicated in 1922, was a direct descendant of Suleiman, which in effect makes him a descendant of Genghis Khan.

Most historians believe that the thriving economy of the Great Horde was largely based on slave trade. Sabers and spears were now used to capture close to 20,000 people every year, and this is how a young girl, who later became a powerful Sultana Hurrem, had been captured during a raid on her native Ukrainian city Rohatyn  (https://koolkosherkitchen.wordpress.com/2018/12/04/ukrainian-borsht-for-sultana-3). Always in a hurry to deliver their live merchandise to the slave market in Istanbul, invaders followed an example of their militant ancestors by eating “soldiers’ fast food” – chunks of meat strung on spears roasted on fire, called shishkebab (shish means spear, and kebab – roasted meat).

Started by a former Ukrainian captive Hurrem, the Sultanate of Women came to an end with the most powerful of them, another girl from Rohatyn, Nadya, who became Turhan Sultan, the mother of Mehmed IV, the great-grandson of Suleiman and Hurrem.  Mehmed, who ascended the throne of Ottoman Empire at the age of 6, ruled together with his mother for almost 40 years at the end of 17th century. It was a period of relative stability; however, the empire and its protectorate the Crimean Khanate constantly encountered resistance by the Cossacks of Zaporozhskaya Sich who had lived in Southern Ukraine since the 15th century. 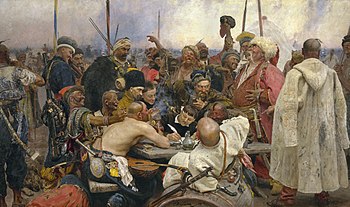 In the famous painting “Zaporozhtsy” I. Repin depicted a true historical event, when during the Russo-Turkish war Sultan Mehmed IV sent a letter to the Cossacks requesting their cooperation and fealty. Probably influenced by his mother who never forgot her Ukrainian roots, the Sultan phrased his request in a soft and polite style, contrary to his usual combination of demands and threats. I will not translate the Cossacks’s response, since the only word in it that would be acceptable in polite company was chort – devil. The rest is a string of obscenities very cleverly strung together (letter quoted in D. Yavornitsky, The History of Zaporozhsky Cossacks). The Cossacks, however, did learn from the Turks and Tatars to string meat on their spears and roast it on fire. The couldn’t call it shishkebab, though, because, with all their fondness for foul language, they balked at “shish” which in Russian and Ukrainian is an obscene gesture, much worse that the American middle finger. Thus, “shish” became “shash” and “shash” acquired a Slavic ending, morphing into shashlik.  Meat was never in abundance in Russia, but in the mountainous regions of Georgia and Armenia, who had also been victims of Genghis Khan and his descendants, shashlik took root and diversified, acquiring different marinades, dressings, and accoutrements.

Since the lockdown has deprived us of occasional dining out, my husband started making Sunday dinners that consist of chicken shashlik marinated overnight and enhanced by a plethora of fresh vegetables. You can use any kind of meat you like, but my husband is on a very strict diet that excludes everything but chicken or turkey breast. First he cubes chicken breast and marinates it with sliced onion, vinegar, dry white wine, salt and pepper. Hot peppers are not used because shashlik is traditionally served with Tkemali – hot sauce or Adjika – extremely hot sauce.

As you see, it is very basic and very simple, but it needs to be mixed thoroughly, preferably by hand. It’s a man’s job, or so claim all the Georgians, Armenians, and Azerbaijanis. Women take care of the vegetables, and I make sure to wash and cube whatever I have on hand, such as zucchini, yellow squash, eggplant, tomatoes, red onions, mushrooms, and anything else you might think of. Sunday afternoon, marinated chicken cubes are strung on skewers (distant relatives of Turkish spears and sabers), interspersed with cubed veggies, and arranged on a portable gas grill outside.

Five minutes on each side, and our Sunday dinner is ready, complemented by chilled Sauvignon Blanc for me and Cabernet for The Chef, and garnished with traditional Georgian fresh cilantro sprigs.

You Deserve to Conquer the World

13 but looking for ways to share my cooking, baking and writing experiences with you. Also don’t for get to check out my creative writing blog! https://thewriteholic.wordpress.com/

I read books. Sometimes, I tell you about them.

“You only live once, but if you do it right, once is enough.”

Keeping You in the Loop

Top stories of the week

Sharing From A Sincere Heart

Gastroenterologist at The University of New Mexico Health Sciences Center

Taking the journey, bumps and all

A Garden of Sonnets

Drawing My Fantasies
The Bach

Me, my scribbles and my ego

GET UP! your ability is greater than your disability

Spilling secrets from the stove

Never argue with stupid people , they will drag you down to their level

Latest books and Technology|Monthly reviews on movies and webseries|Podcasts |Web design|Tips on YouTube & etc...|I will Post on Monday , Thursday and Saturday 😊

Making sense of it all. Stories that change us.

Exploring the world to every bit in a creative way

Helping others become even better versions of themselves