Louis XIV of France was a great and glorious king who has consolidated a great and glorious country by forging a centralized government – absolute monarchy. Having been scared out of his wits as a teenager during the Fronde rebellion, when he, his mother Anne of Austria –  the Regent, and Cardinal Mazarin fled from Paris and barely escaped with their lives, the future Louis le Grand set out to eradicate the last remnants of feudal power. We don’t know whether there was an amorous dalliance (perhaps even a secret marriage) between the Queen-Regent and the Cardinal or it was only one of the rumors transformed into a legend.

Of course, the wild imagination and lively quill of Alexander Dumas père  has led generations of teenagers to believe that by gobbling up The Three Musketeers, Twenty Years After, and The Vicomte de Bragelonne: Ten Years After they actually learn French history.  Be that as it may, the Queen and the Cardinal were united by one goal: to give the future monarch absolute authority and victorious kingdom, and they succeeded. And as soon as he ascended the throne, Louis, traumatized by the Fronde years, went even further by demoting the powerful vassals (mostly his uncles, aunts, cousins, and other important feudal lords) to ineffectual courtiers (Hatton, Louis XIV and His World).

The magnificent palace of Versailles contained apartments for courtiers. However, in order to have the means to support themselves in style appropriate to their rank, the princes and marquises had to attend upon the king, who dispersed privileges seemingly at random. Lavish lifestyle included extravagant entertainment, the most important part of which was the ballet. Credited with invention of ballet as a genre, Louis often took the lead part.

The Sun King who brought his country to the apex of its power was far from humble. Asked whether it was legal to tax nobility rather than put the heavy tax burden solely on the poor population, he snapped, “It is legal because I wish it.” On his deathbed, he quipped, “The state? I am the state and the state is I.” He was definitely justified in taxing a multitude of rich relatives, close and distant, whose only occupation was to pay court to him, because someone had to pay for all this opulence. That someone was a humble commoner from the provinces who turned out to be a brilliant financier, Charles Colbert, later Finance Minister of France. Colbert was ably assisted by Louis de Béchameil, marquis de Nointel, the King Head Steward, who was a great art lover and a gourmand. It was Louis de Béchameil who took an older cream sauce, originally made by the famous chef la Varenne, and carved a place for himself in food history by creating the mother of all white sauces, named after him:

“That fellow Béchameil has all the luck! I was serving breast of chicken à la crème more than 20 years before he was born, but I have never had the chance of giving my name to even the most modest sauce,” enviously commented another gourmand, Duke of Escars (Montagne, The Concise Larousse Gastronomique).

The classic Béchamel sauce consists of milk, butter, flour, cheese, and nutmeg and/or other spices. Inspired by wonderful Brenda Sue of the great blog David’s Way to Health and Fitness who pointed me towards Thrive Market where I found all kinds of healthy kosher goodies, I set out to make fake non-dairy and flour free béchamel. After several experimental attempts, coconut cream with nutritional yeast, enhanced by allspice, came pretty close.

Béchamel sauce can be used with practically anything, from pasta to seafood, and so can my fake one. I decided to try it out with my favorite combination of surimi (fake crab sticks) and extra firm tofu. 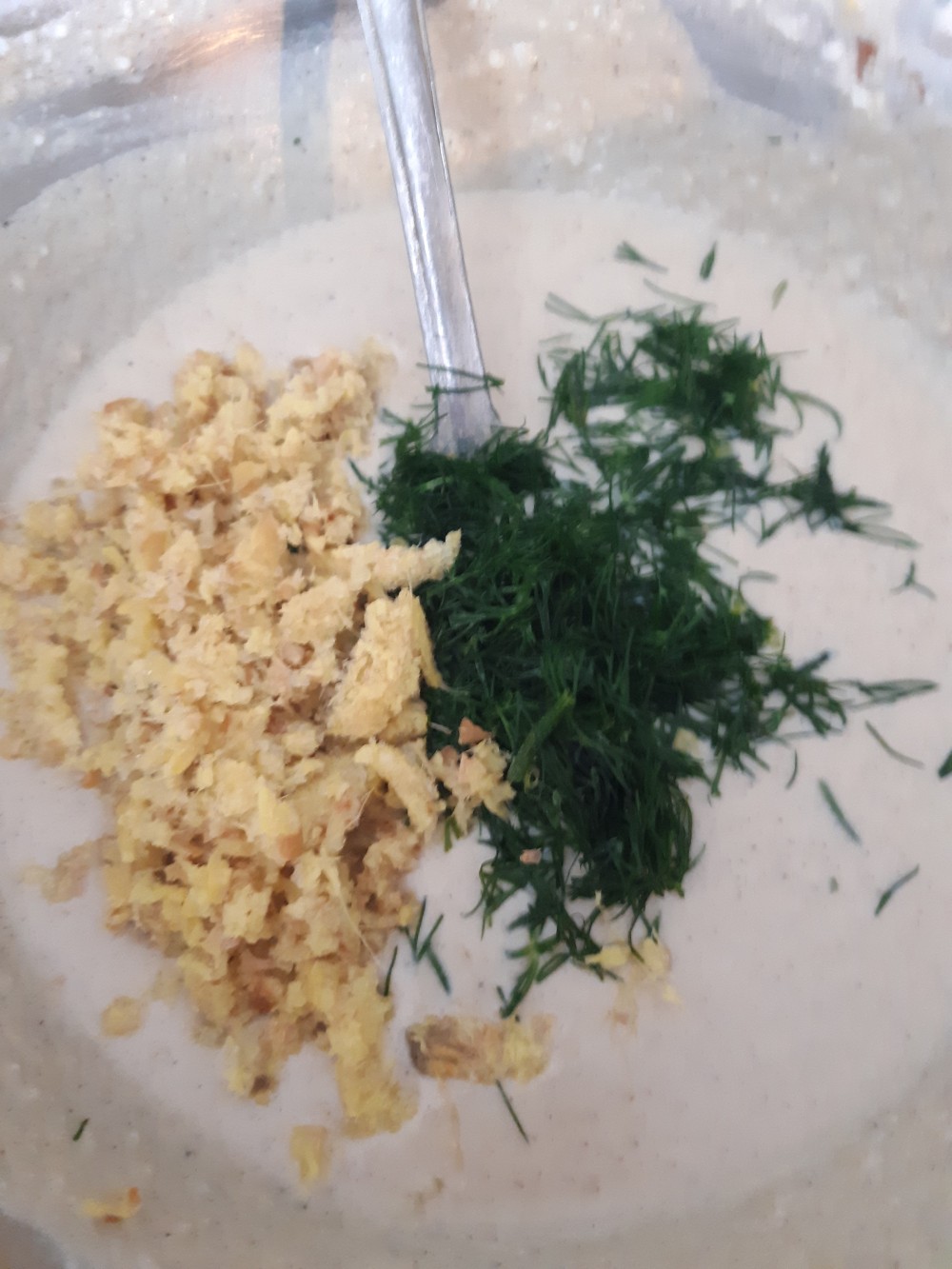 On a spur of a moment, I also added grated ginger and fresh dill – don’t ask me why, Beautiful People; it’s my sauce, and I have the right to do what I wish! After all, that’s what made Louis XIV great and his Head Steward Louis de Béchameil famous.

So far none of this actually had to be cooked. Mixed together, it tasted great. Yet I felt that something was missing – pasta. Luckily, I had on hand another great find from Thrive Market, Wonder Noodles. They are gluten free and ready to eat. If you want them hot, just pop them in the microwave for one minute.

So now I had it: drained Wonder Noodles (they come in all different varieties; this one was Macaroni) and a fantastic mix of fake crab, fake sauce Béchamel and real tofu. All I had to do is marry the two.

I spooned the mix on the bed of noodles, popped it in the microwave for one minute and – voila! – I had the fastest dinner I’ve ever had to make. Even Louis de Béchameil would be proud to serve it to his great and glorious king!

Not a blogger, but a girl who wrote her heart out.

When it becomes too hot, the clouds cry.

The Forgers of Fantasy
Jackanori, (MPD)

TOWER AND FLIGHTS (An AmericaOnCoffee Blog)

In The Beginning Man Tried Ascending To Heaven via The Tower Of Babel. Now He Tries To Elevate His Existence Using Hallucinogenic Drugs. And, Since The 20th Century, He Continually Voyages Into Outer Space Using Spacecrafts. Prayer Thru Christ Is The Only Way To Reach Heaven.

An Initiative for Training and Skill Development

Our lives in the present age.

-Reclaiming my truth and power after abuse.

Get Rid of Acne Fast!

Being vegetarian and eating greens and salads out is always a risk, it s hard to be 100% sure all you eat is absolutely safe, so take it twice a year to guarantee your body is free from unwanted organism

Get your info on how to lose weight healthy

Life's Ephemera in Ink and Pixels

The best travel content you can get as a human

When The Soul Writes

A Place For Readers

clairvoyance, coincidence, & what have you

Islamic Dua and Wazifa For Love back and Solve All problems