I love my Haitian students. Make no mistake – I love all my students, and I reveal in having “the United Nations” environment in my classroom. However, students who come from this tiny, much-suffered, but proud little country have a special place in my heart. No matter the topic of conversation, if there is even one Haitian person around, invariably the discussion will turn to education. They absorb knowledge the way we breath air, and always ask for more. 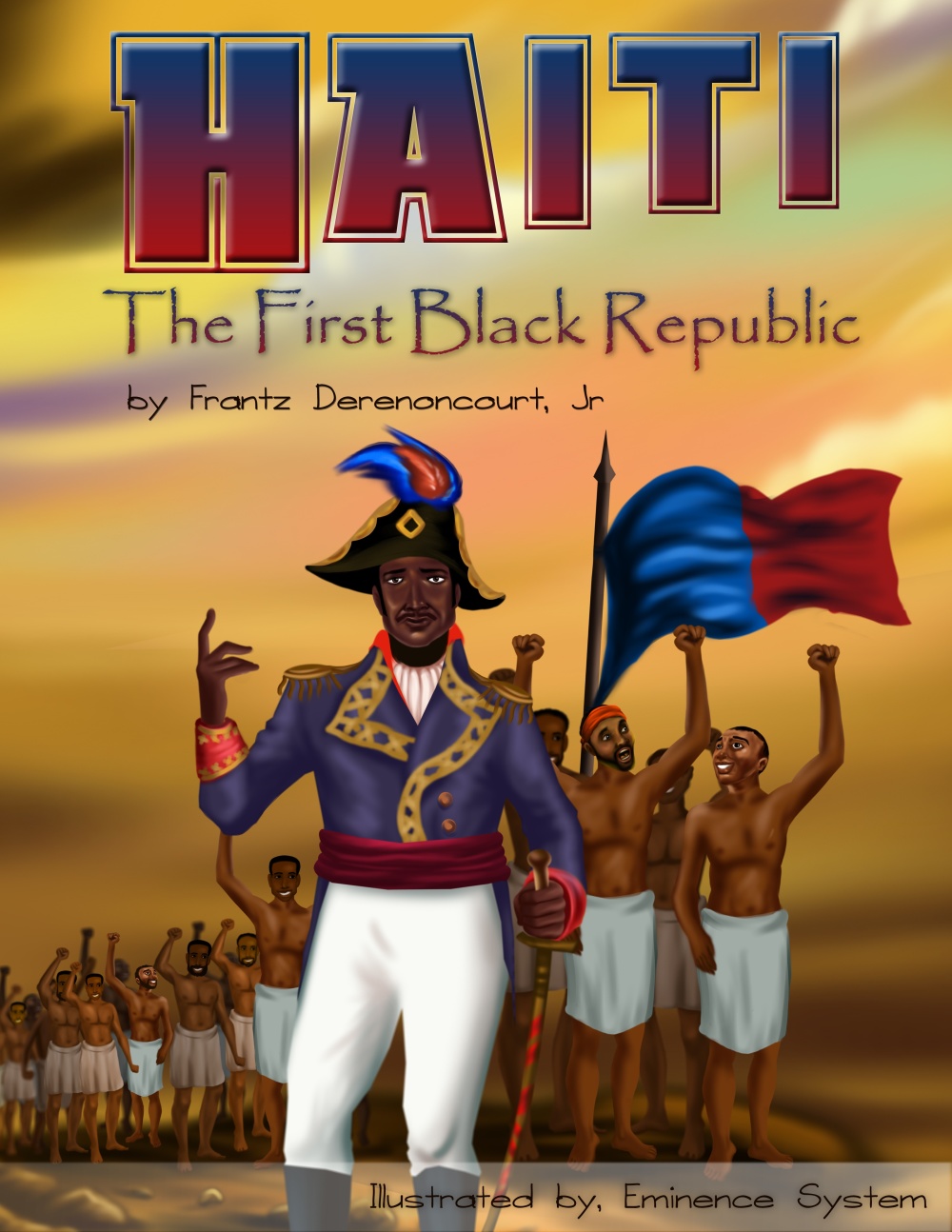 The first and the oldest black republic in the world, and the second independent country in the Western Hemisphere after the United States (M. Christopher, Haiti, 2016), it has a fascinating history, colorful and dramatic.

Columbus landed close to what today is the town of Cap-Haitien on his first voyage in 1492. Under his command he had three vessels, Nina (“The Girl”, later known as Santa Clara), Pinta (“The Painted”), and Santa Maria. The first two were 19 ft caravels. To give you a frame of reference, our little Catalina, considered not a “blue water” (ocean-going) boat, is 26 ft. The courage of those sailors who crossed the Atlantic in 19-footers never seizes to amaze me! Santa Maria, however, was a fairly large carrack, even by modern standards; at 62 ft hull length, she was Columbus’ flagship, fondly dubbed La Capitana.

This painting depicts Columbus “taking possession of the New World in caravels The Nina and The Pinta.” Wait a minute, what happened to Santa Maria, the flagship? It appears that on Christmas Eve, December 1492, getting ready to return home, the admiral and his officers, including the steersman, had a nice going-away party with a few drinks. Exhausted after all the packing and having had no sleep for almost two days, Columbus conked out around 11 p.m. His officers soon followed suit, and the steersman turned his rudder over to a cabin boy. “Hey, nino, – he must’ve said, – the night is calm, even a pipsqueak like you could hold her still, and don’t you dare tell the boss! Nighty-night!” 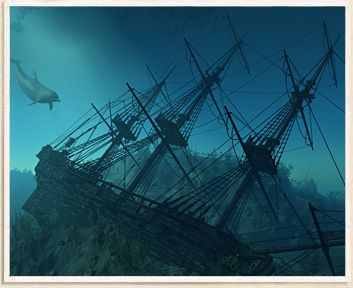 Sure enough, the hapless kid ran La Capitana aground. That was some rude awakening for Columbus and his crew, but, always practical, he ordered the wreck dismantled, and, with gracious permission given by Cacique Guacanagari, the leader of native Taino tribe, used salvaged timber to build a settlement called “Navidad” (Christmas). The hospitable Cacique allowed 39 men to be left behind. Unfortunately, on his second voyage, Columbus found his people dead and the settlement burnt. Tragically, the peaceful and friendly indigenous people were not immune to European diseases, and contact with newcomers proved fatal to them (The Journal of Christopher Columbus (during His First Voyage, 1492-93, London, 1893).

About 150 years later, the formerly peaceful island became pirate’s haven. Actually, the name was specifically given to the island or Tortuga that forms part of Haiti. Romanticized in many books and films, from Captain Blood by Sabatini to the blockbuster franchise Pirates of the Caribbean, Tortuga was a neutral hideout, a pirate republic regulated by strict Brethren of the Coast rules. Captain Jack Sparrow, brilliantly portrayed by Johnny Depp as one of the Brethren Princes, is a fictional character (sorry, fans!), but many protagonists in Sabatini novels are based on real personages and events. At the same time, in the second half of 17th century, African slaves were imported to Hispaniola (the island shared by Santo Domingo and Haiti) to work sugar, coffee, indigo, cotton, and tobacco plantations. The richest colony of the French empire, Hispaniola became known as “The Pearl of the Antilles,” but its history is wrought by slave insurrections. By that time, the pirate era came to an end, and the capital was moved from Tortuga to the mainland (today Port-au-Prince). Nonetheless, legends abound and enthusiasts are still searching for pirate treasures. Some of them, such as the famous Mel Fisher, get lucky, and some of their finds are displayed in several Key West museums. 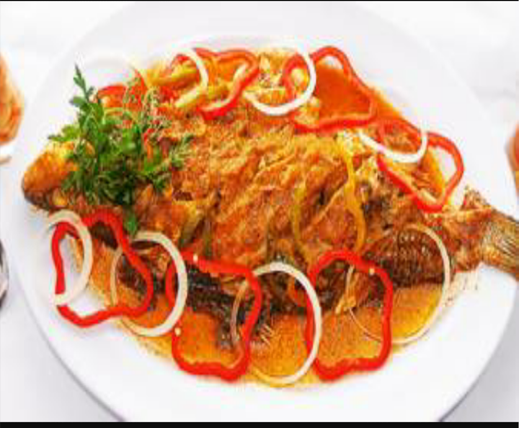 I think that the real “pearl”, the true treasure of Haiti is in its freedom-loving people, its rich culture, and the unique flavors of its food. I’ve asked some of my students to share authentic Haitian recipes. Here is the first one, with beautiful photos, offered by Josette Pierre (See Haiti, Part 2. Fried Accra here, and Haiti, Part 3. Liberty Soup here). Even though the concept of barbecue (“barabicu” in Taino and “barbacoa” in European languages) originated in Haiti, and grilled fish is sold by many street vendors today, Josette’s fish is baked, using traditional Haitian marinade. 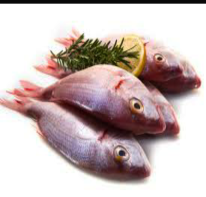 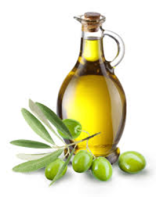 Take four – five fresh red snappers, scale them and clean them. To make marinade, you’ll need to dice red onion and some bell peppers, preferably different colors, like green, red, and yellow. You’ll need to chop up some fresh parsley and a few garlic cloves (to taste). Get your olive oil, lemon or lime juice, and some red wine ready. 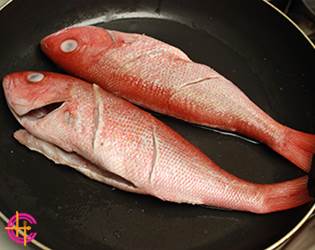 Slash the body of each fish, rub fish with salt, and dredge them first through wine, then through lemon juice. Leave it be for about 15 – 20 minutes. 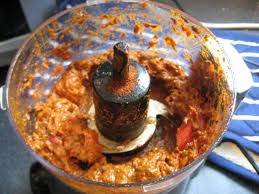 While your fish is resting, make marinade by blitzing onion, peppers, garlic, parsley, and some olive oil in a food processor or blender. Add salt and pepper to taste.

Your fish wants to be rinsed again with cold water, and now you can add marinade to it. Give it a little taste test – you might want to add some more salt and pepper, and perhaps some more lemon juice, but don’t overdo it! Mix it well and let it rest again for 30 minutes.

Now is the time to oil your baking dish, place your fish into it, and bake it uncovered for about 40 minutes, or until golden brown and beautiful. Don’t forget to flip it about half-way through baking!

A parting statement from Josette: It’s very delicious. I believe that you will love it. Try it out one day and let me know what you think. Thank you, Josette, for sharing this great recipe with us!