Teenage Jewish American girls of Hispanic origin have three significant birthdays celebrated in lavish style befitting a wedding. As most  Jewish girls, when they turn 12, they celebrate the traditional Jewish coming of age, Bas (Bat) Mitzvah (boys have to wait an extra year; their big day, Bar Mitzvah, is at 13). As most American girls, they also want to have a Sweet Sixteen – why give up a chance to party, after all? However, Latin / Hispanic coming of age is called Quinceanera – literally a girl of 15.

Quince is a grand ball, and la quinceanera is its queen. Every queen should have a court, and the quinceanera chooses her court of honor among her friends: 15 girls and 14 boys, one couple for every year of her life. The gowns are stunning; sometimes, when I drive through Hispanic areas of the city, I almost stop traffic because I slow down in front of every Quince salon to marvel at the breathtaking gowns on display. There are all kinds of quaint ceremonies symbolizing transition to adulthood: the girl’s father changes her flat shoes for high hills, her mother puts a tiara on her head and lipstick on her lips, and her younger sister or cousin gets her favorite doll. Then there is a waltz, frequently choreographed by professionals (how many teenagers do you know who dance waltz in real life?):

Some sources claim that this tradition dates all the way to the Aztecs, around 500 BCE. Others insist that it was the Spanish conquistadores who brought it to the New World.  Regardless of its origins, Quince Anos (15 years) celebration, or Quince for short, is one of the most spectacular features of life here in South Florida.

So when, during my weekly foray into my favorite farmer store, I discovered quince – the fruit, not the celebration! – I immediately thought of making a traditional Odessa summer dessert, as fresh and beautiful as the quinceanera girls. Quince is a yellow fruit, related to apple and pears, grown around the Mediterranean region and widely known in the ancient world. In fact, apple dipped in honey on Jewish holiday Rosh haShana was most likely not an apple, but a quince, since apples did not grow in Ancient Judea, but quince flourished. For those who like marmalade, the word actually means quince jam, from Portuguese marmelo – quince.

Quince was an emblem of the Greek goddess of love Aphrodite, and a poem that came to us summarized in prose describes a young man called Acontius who, seeing his beloved in the courtyard of the temple of Aphrodite, plucks a quince from the “orchard of Aphrodite”, inscribes its skin, and furtively rolls it at the feet of the young lady’s illiterate nurse.  Her curiosity aroused, the nurse hands inscribed fruit to the girl to read aloud, and the girl finds herself saying “I swear by Aphrodite that I will marry Acontius”. A vow spoken in the goddess’s court cannot be broken, so our first quinceanera is now as good as engaged (M.B. Skinner, Catullus in Verona: a Reading of the Elegiac Libellus 2003). I hope it was a happy union!

I have not seen quince in 40 years, as it doesn’t grow in tropics, so you can imagine my excitement when I was cutting it into bite size pieces, squeezing lemon juice into the pot, adding water and zylitol, bringing it to boil, and then simmering, and simmering, and simmering… Yes, Beautiful People, it is the easiest dessert you’ve ever made: all you have to do it cut it, skin on, put it into a pot, seeds included, and add some lemon juice and sugar or substitute, but it takes at least a couple of hours for it to acquire that gorgeous golden pink shimmering color and intense flavor. 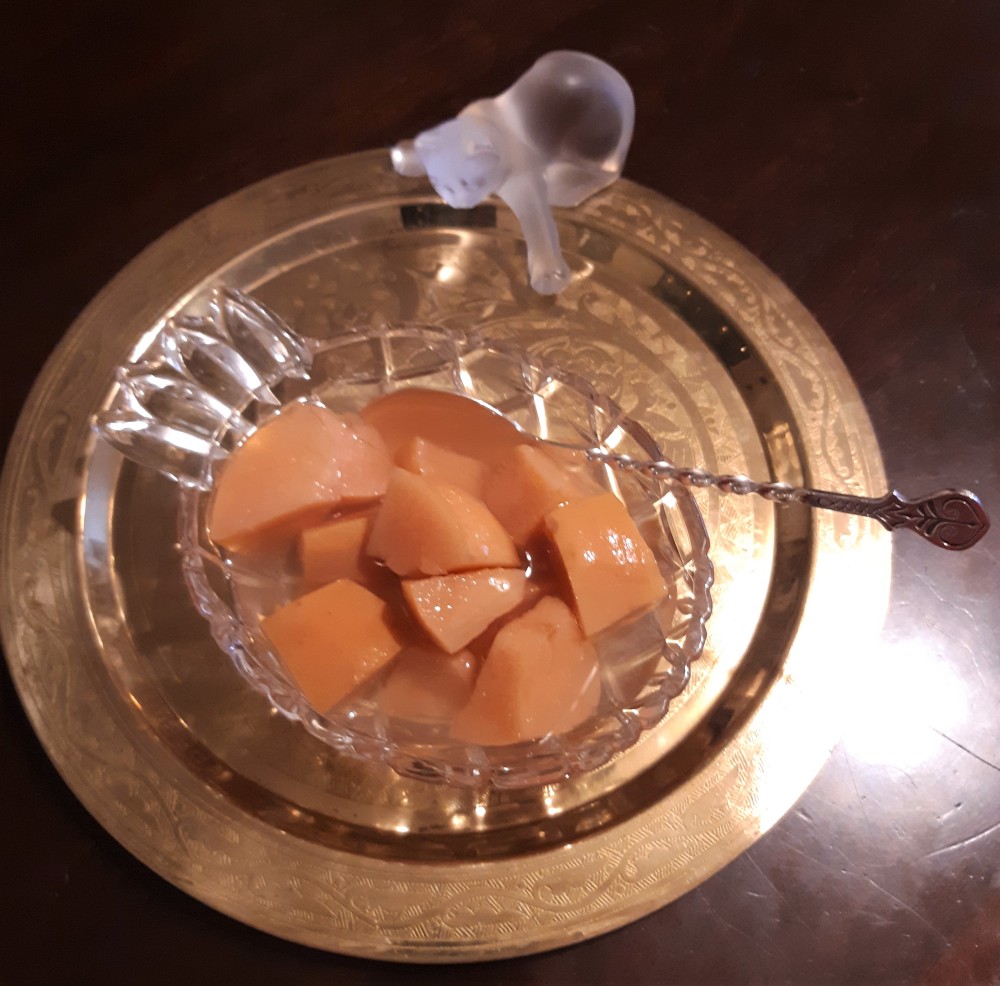 According to Encyclopedia of Cultivated Plants, when a baby is born in the Balkans, a quince tree is planted as a symbol of fertility, love and life. Modern science has discovered that quince indeed promotes a healthy life: “The health benefits of quince include its ability to prevent cancer, aid in weight loss, improve digestive health, reduce cholesterol, and boost the immune system. It also prevents gastrointestinal diseases, soothes inflammation, improves the health of your skin, decreases blood pressure, prevents allergic reactions, and stimulates circulation in the cardiovascular system ” (www.organicfacts.net). So chill your delicious quince compote, enjoy a bowl or two, and feel like a very healthy queen of a grand ball!