It has been popularly reported that the Nazis ordered all Danish Jews to wear an identifying yellow star, as elsewhere in Nazi controlled territories. In some versions of the story, King Christian X opted to wear such a star himself and the Danish people followed his example, thus making the order unenforceable (Wikipedia).

Here is a staunch defender of his Jewish subjects, King Christian X, defiantly riding through the streets of Copenhagen without guard or even a groom, as he did every day. The story of the King and the star is a myth, though. Nonetheless, when the Nazi occupiers ordered Danish Jews to be arrested and deported, the Danish resistance movement, with the assistance of many Danish citizens, managed to evacuate 7,220 of Denmark’s 7,800 Jews, plus 686 non-Jewish spouses, by sea to nearby neutral Sweden. The rescue allowed the vast majority of Denmark’s Jewish population to avoid capture by the Nazis and is considered to be one of the largest actions of collective resistance to aggression in the countries occupied by Nazi Germany. As a result of the rescue, and the following Danish intercession on behalf of the 464 Danish Jews who were captured and deported to the Theresienstadt transit camp in the Protectorate of Bohemia and Moravia, over 99% of Denmark’s Jewish population survived the Holocaust.

In response to a surge of antisemitism and a 20% increase of antisemitic crimes in Germany in the past year, Germany’s government commissioner on Jewish Life Felix Klein issued a warning,” “I can no longer recommend Jews wear a kippah at every time and place in Germany.”
“The opposite is true,” tweeted Richard Grenell, the US ambassador to Germany. “Wear your kippah. Wear your friend’s kippah. Borrow a kippah and wear it for our Jewish neighbors. Educate people that we are a diverse society.”

The spokesman for German Chancellor Angela Merkel, Steffen Seibert, stated that “the state has to ensure that the free exercise of religion is possible for everyone” (The Washington Post). 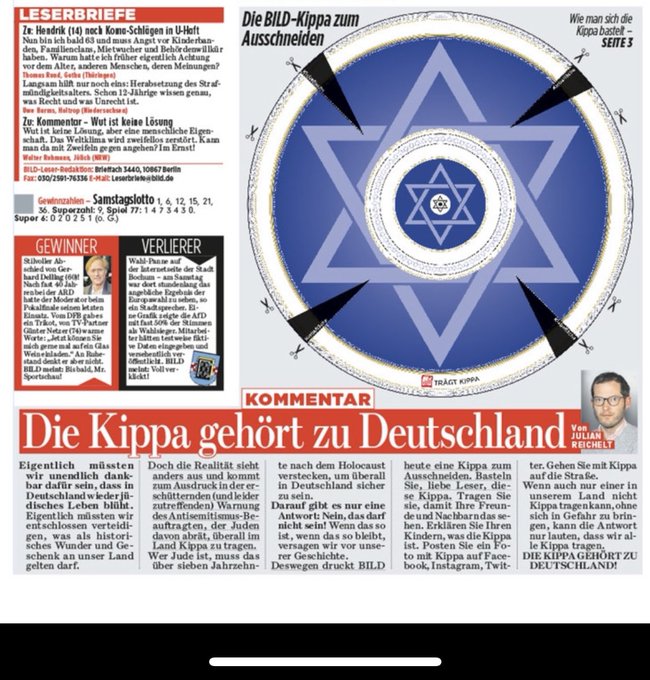 Germany’s best-selling newspaper Bild printed an extraordinary front-page commentary on Monday declaring that: “The kippah belongs to Germany,” with a cut out of a kippah that can be worn as a sign of solidarity against rising antisemitism in Germany. The commentary by the paper’s editor-in-chief, Julian Reichelt, is admant: “Bild printed a kippah to cut out” because “it should not be allowed” that Jews in Germany have to hide after the Holocaust in order to be safe. “Our society has failed” if Jews in Germany cannot wear kippot (The Jerusalem Post).
The shining example of the people of Denmark and their King has been emulated by our friends and supporters 76 years later. We are immensely grateful to them for their solidarity and love for their fellow human beings. Kristallnacht and the tragedy of Holocaust should never happen again, and the only thing that can save us  – and the world! – from it is LOVE!
Here is my very small contribution to

via “All You Need Is Love” – Zoodles, Part 4. Chocoodles.