Tzar Ivan the Terrible was a cruel tyrant. Everybody knows that. And just like many things that “everybody knows” and thus nobody questions, the sobriquet “Terrible” should be taken with a grain of salt. Since we are in the middle of Pesach (Passover), I recommend Kosher for Passover Red Sea Salt.

True, he did accidentally kill his son Ivan Ivanovich, but the kid had the temerity to argue with dad! You gotta have respect for your elders! However, look at the other European monarchs, his contemporaries: Henry VIII used to chop off his wives’ heads left and right, presumably considering it much cheaper than suing for divorce (I know, the Pope wouldn’t grant him a divorce, so he eventually became his own Pope – the original DIY guy). Catherine de Medici killed close to 30,000 Huguenots during the Night of St Bartholomew, and that was no accident!

Fast forward four hundred years: in the mid-1970’s, one of the prominent Russian film directors Leonid Gaidai produced a movie “Ivan Vasilyevich Changes Professions” based on a story by Michail Bulgakov. If you want an hour and a half of non-stop laughs, watch this brilliant satire on Soviet reality where a petty tyrant cum apartment manager accidentally changes places with Ivan the Terrible. The great Bulgakov, with his genius, doesn’t only hint at Stalin, especially with the banquet scene (Stalin’s banquets at which he humiliated people by forcing them to dance and make fools of themselves were infamous). He raises a deeper issue: a bully is a bully, whether he is a humble Soviet apartment manager or a powerful monarch, with the only difference that a bully of a monarch would be called a tyrant.

This is the banquet scene from the film where the Tzar and his guests are served “red caviar, black caviar, and the caviar from beyond the sea… eggplant.” The movie is chock-full of hilarious lines, but “the caviar from beyond the sea” is probably the best known. If you stop and think, however, you’ll realize that real caviar, both red (salmon roe) and black (beluga or other sturgeon fish) were so plentiful in Russia in 15th – 16th centuries, that cheap taverns used to serve them in huge bowls, to be eaten by spoonfuls. Eggplant, though, was exotic and very pricey, to be found rarely even on a royal table. However, if you again stop and think, and perhaps consult a map, you’ll see that eggplant, coming from India, has traveled quite a distance, but definitely not “from beyond the sea.” Anyway, I’ve already posted a recipe for Eggplant Caviar (please click here), so I am taking an artistic liberty to bring to your attention a vegetable which is actually a fruit and which, in those times, truly came “from beyond the sea” – all the way from Mexico. 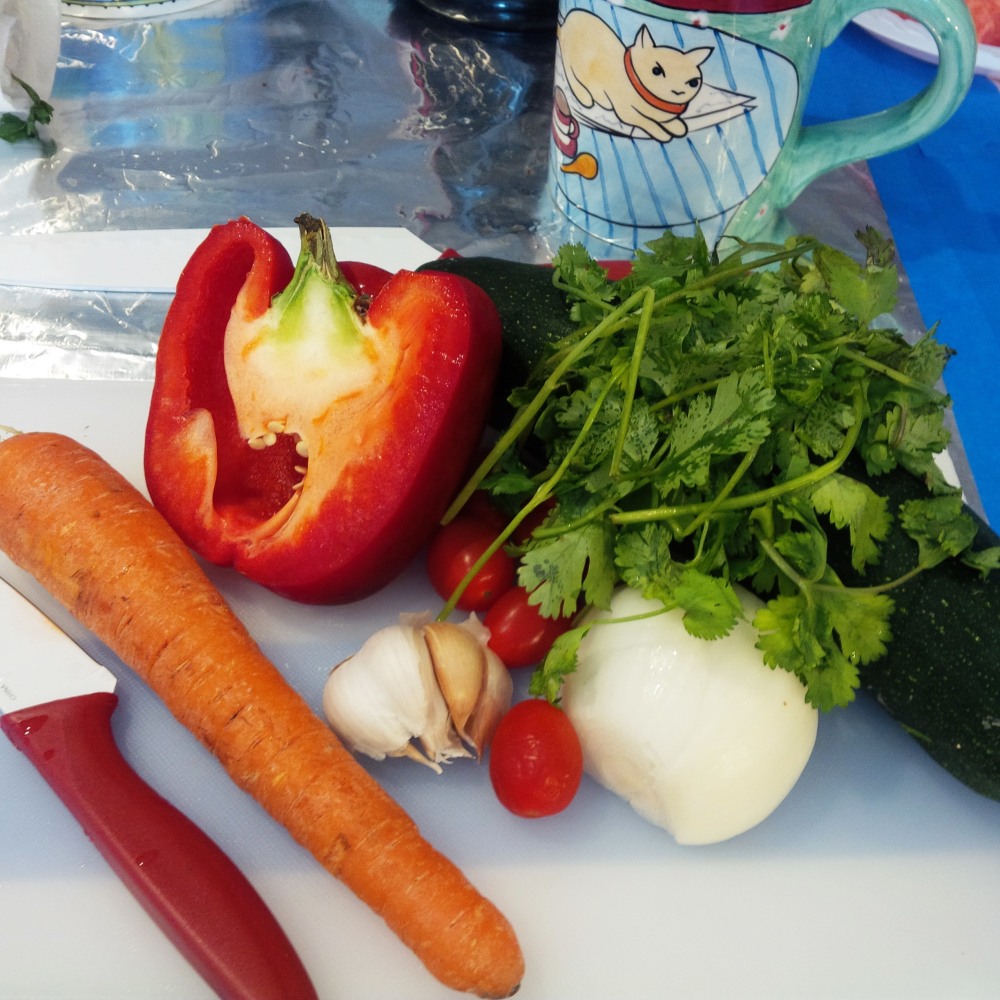 Zucchini Caviar was considered even more of a delicacy than the eggplant one, possibly because it really took some finesse to get it just right. There are many variations of it, but you know how everybody’s grandmother had the best recipe, and mine certainly did! It includes zucchini, carrots, sweet red pepper, onion and garlic, and lots of cilantro. I don’t use tomato paste (you’ll see it in some recipes), but I throw in bits of grape tomatoes, mainly for decoration purposes. 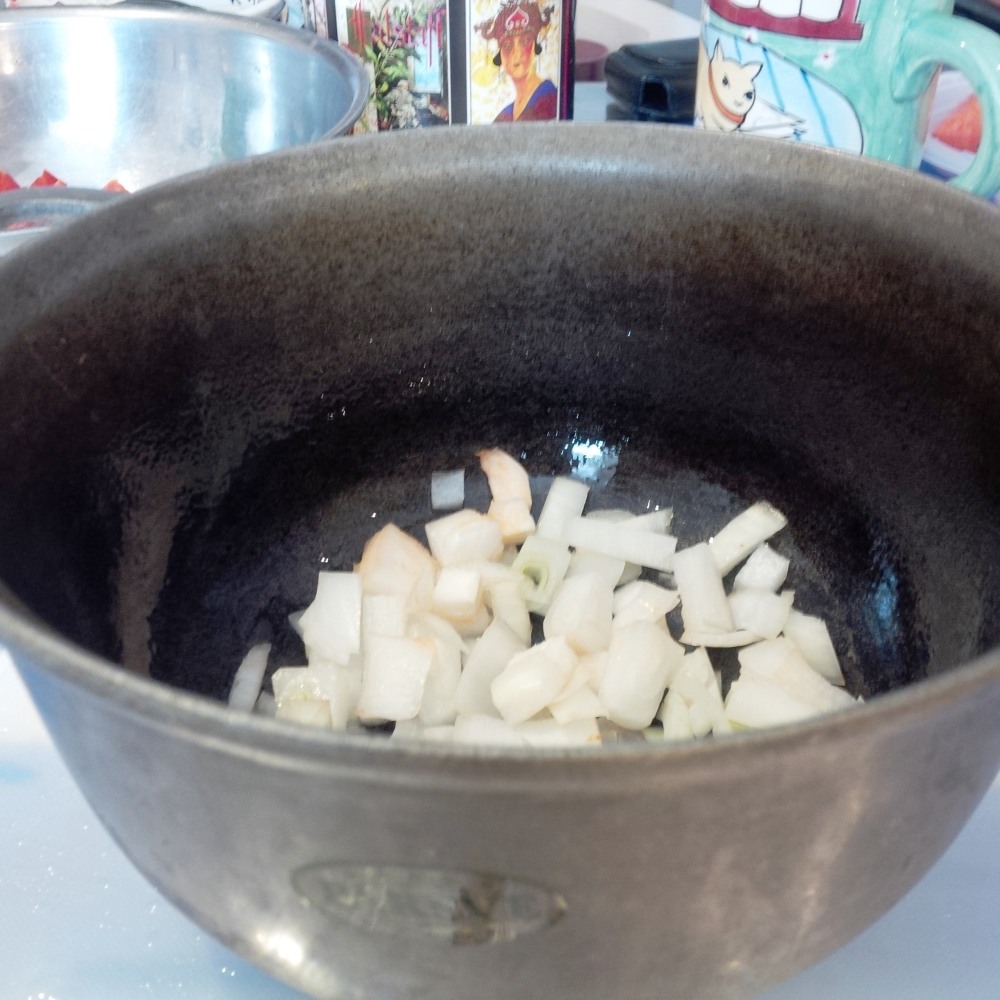 First you dice some onion and garlic and saute until soft and translucent. I prefer to use a kazan which is a cast iron pot with a rounded bottom, perfect for sauteing as it distributes the temperature more evenly. I have heard a theory recently that after WWII, Russians started using the round German helmets for cooking pots. The truth, however, is much more interesting and quite romantic. The city of Kazan, today the capital of Tatar Autonomous Republic and one of the five largest cities in the Russian Federation, was founded in the Middle Ages and got its name…  from this cooking pot! According to the legend, a Tatar princess Soyembika dropped a golden kazan into the river, and the city was founded on that spot. 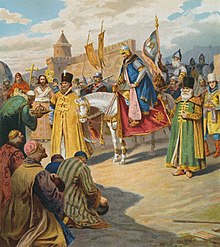 In a famous battle, Ivan the Terrible conquered Kazan and made it a part of Russia (painting by P. Korovin).  His cooks, apparently,  discovered the round pot and made it a part of traditional Russian cooking equipment. No Russian kitchen is complete without an assortment of different sizes of kazans. 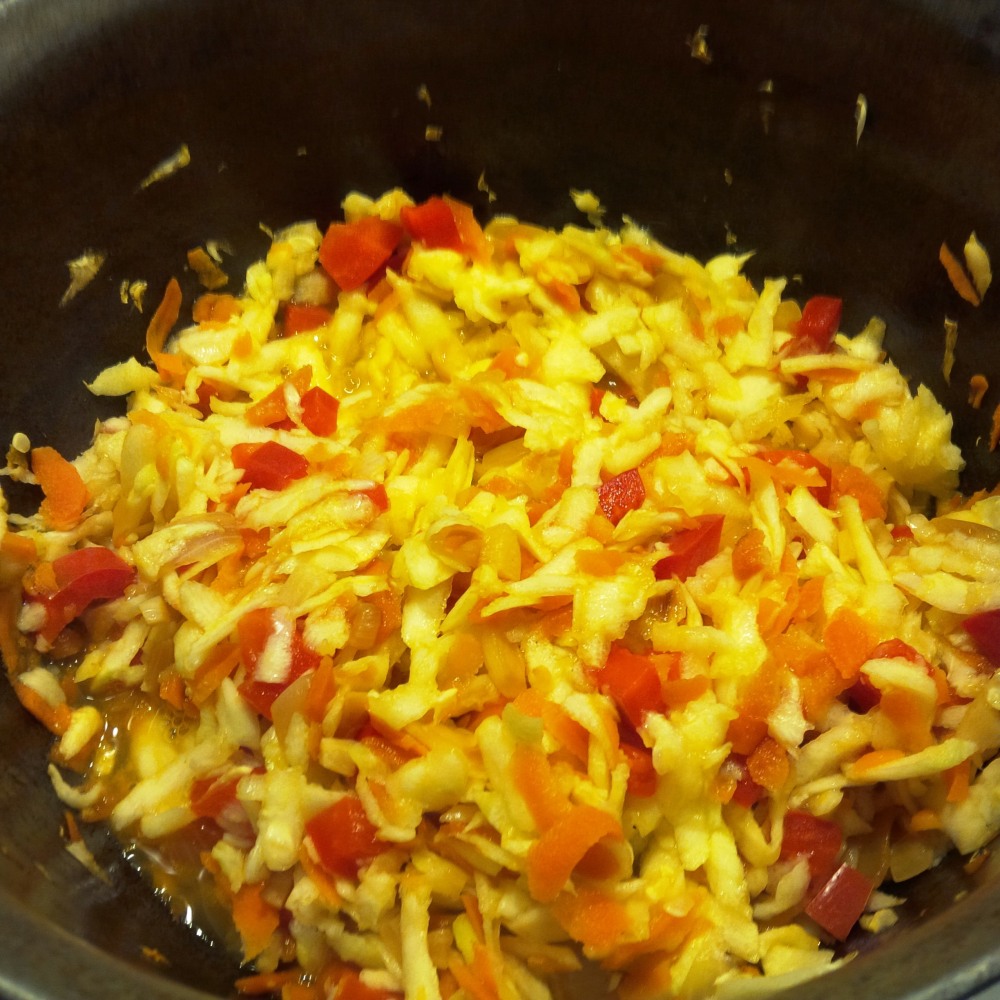 Meanwhile, while your onions and garlic are sauteing, you can grate zucchini and carrot and dice pepper. Dicing zucchini will give you more texture, and grating it finely will produce a creamy mass. I prefer the golden middle, even though I don’t have a golden kazan. Throw all these grated and diced veggies into the pot and cover it firmly. In a few minutes, zucchini will produce out its own liquid. 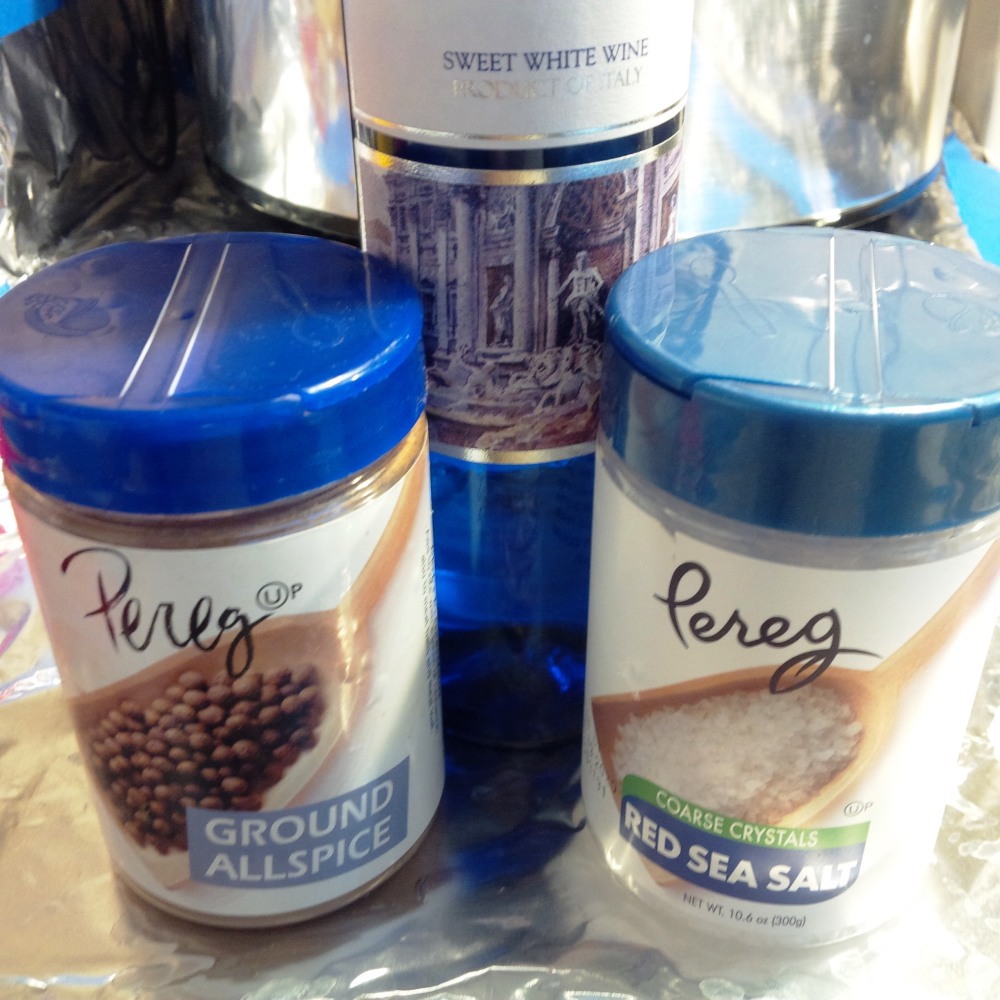 Now is the time to add salt and pepper (I actually use allspice, but I am sure they didn’t have it in 16th century). Wine is optional but it does enhance the flavor.  Mix it all up, reduce the heat, and saute for about 30 minutes, or until the veggies blend nicely but the texture is still visible.  Meanwhile, you can listen to the original Bobby Darin recording of “Beyond the Sea.”

I like to use little yellow grape tomatoes, but they were nowhere to be found, so in a pinch,  I diced the red ones and added them to the “caviar” when it was almost ready. You want those little tomato pieces to soften just a bit but not disintegrate! 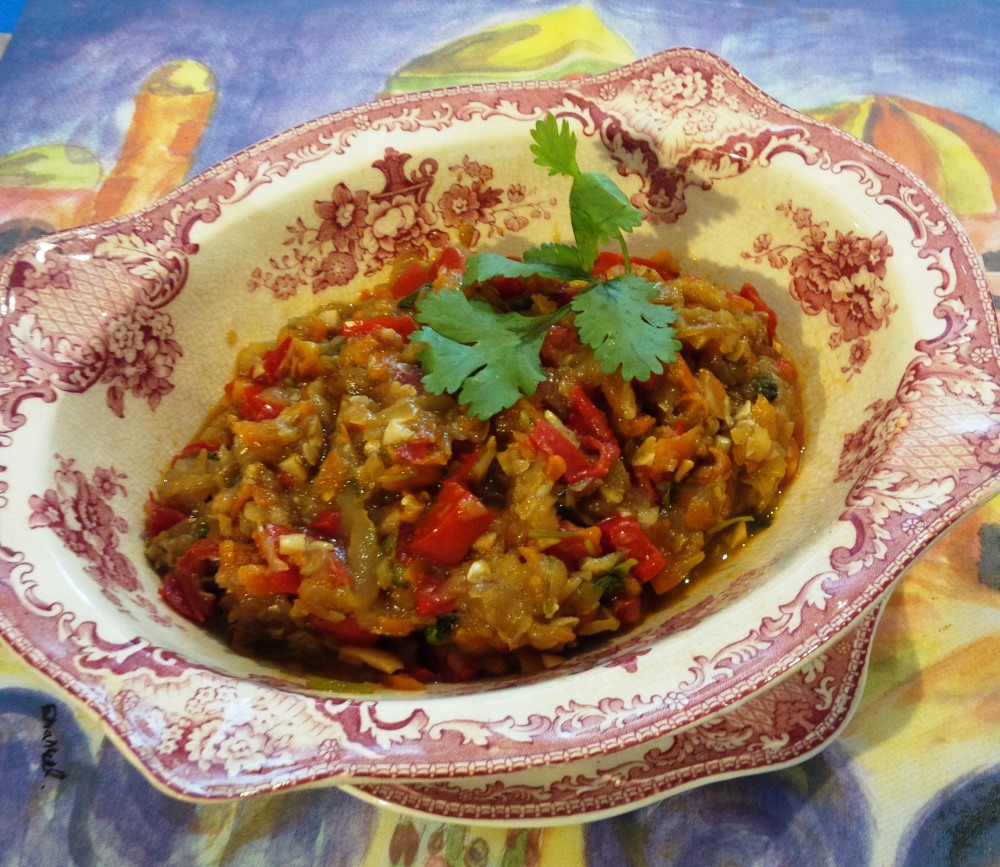 Do you think Ivan the Terrible would’ve enjoyed this dish? They say he had, well, terrible eating habits, gorging himself on whatever was put in front of him without stopping to savor the taste. But who cares; the caviar “from beyond the sea” has graced my Pesach table, and I hope it will enhance yours!

My review of hot sauces, my favorite peppers, and other stuff...

To adventure is to live

World in your eyes

Sharing the Word of Faith

Hillborn Organic Coffee is a family owned business located in Moshi, Tanzania. Our fun team, knowledgeable and experienced guides specialize in various types of tours. We have thorough knowledge of the region and provide the best experiences. Whether on a budget or wanting something more luxurious, Hillborn Organic Coffee will provide you with a trip of a lifetime. Charity Work: Another very important attribute of our company which is extremely close to our hearts is the charity work. The charity organization currently has two projects underway. The first project addresses women's menstrual health. Most women especially those who come from poor family backgrounds are unable to buy normal pads every month. The project aims to educate women about their menstruation cycle and promote best practices to improve their health and wellbeing. We also provide these women with health kits which include reusable pads that can last many years and therefore are more affordable than normal period pads. The second project aims to help poor communities and people in villages who are unable to afford basic needs. We go to the villages and look for people in need such as the elderly, orphans and widows. Once we have them on list; we go back to provide them with some of basic needs including rice, cooking oil, soap, clothes and medicine for those who they are sick. The Charity Organization is a result of many years of hard work. It is only beginning of many more projects to come. It is truly a blessing to have the opportunity work with and give back to our community. If visitors wish, they can choose to visit these communities and also volunteer to help out with this organization.Eastern Africa is known as the historical home of the coffee plant, and the region continues to be a major global supplier. On a tour from Kilimanjaro, you can learn the significance of Tanzania’s coffee trade and sample freshly brewed coffee from beans roasted on working plantations. Here’s what you need to know.   Highlights Discover some of Tanzania’s oldest and largest plantations in the foothills of Mount kilimanjaro, just outside Moshi town. Visit family-run plantations for insight into the production process and daily life of coffee farmers. Taste freshly brewed, locally grown coffee, and learn about its international trade. Combine your tour with other regional attractions on a multi-day sightseeing excursion.   Tanzania Coffee History Having made its way to Tanzania from its native Ethiopia more than 400 years ago, the coffee plant has long been a valuable trade crop in the country. The arabica variety dominated under German colonization, leading to its widespread naturalization today. However, the robusta species still accounts for about 30 percent of Tanzania’s total produce. Kilimanaro's arabica beans are particularly notable for their distinctively rich flavor, a product of high elevation and fertile land. Look for opportunities to purchase local produce. Some smaller sellers will also give you the chance to practice your manual bean-grinding skills too.

IrvineVitamin Blog
NeotypeStation Blog
Ideas and Advice for How To Live a Joyful and Empowered Life.

Join us on the journey

Naturally Beautiful Skin ... At Any Age!

An exploration of writing and reading

THIS SITE IS ABOUT ME, MY CREATIVITY, MY IMAGINATION AND MY FEELINGS.

The Express Yourself Freely Blog

Learning and Living through Inquiry

Practical information, tips, and advice on how to teach English as a second language and promote cross-cultural understanding among young learners in Asia

my life and imagination

Spiritual stories that capture the depth of dreams, supernatural faith and prophetic counsel.

Special Education Teacher with Tips on How to Teach Diverse Learners

cultivating a beautiful and full heart

Aliens (angles, demonds and enities), issues dealing with humanity and the planet

© Felipe Adan Lerma - All Rights Reserved - Blogging at WordPress Since 2011 :)