Beer is liquid bread. They discovered it in Ancient Mesopotamia, when someone was grinding barley (some sources claim it was wheat), and the rain started. That “someone” ran into the house, got busy with other household chores, and forgot about the unfinished job. A few days later, she happened to walk by that place (yes, it was a “she” – most sources agree on this), and a new enticing smell wafted from the forgotten clay bowl with almost-ground grain. An intrepid adventurer, she picked up a straw, stuck it into the bowl (good thing she did, since it was full of all kinds of debris), and sucked. 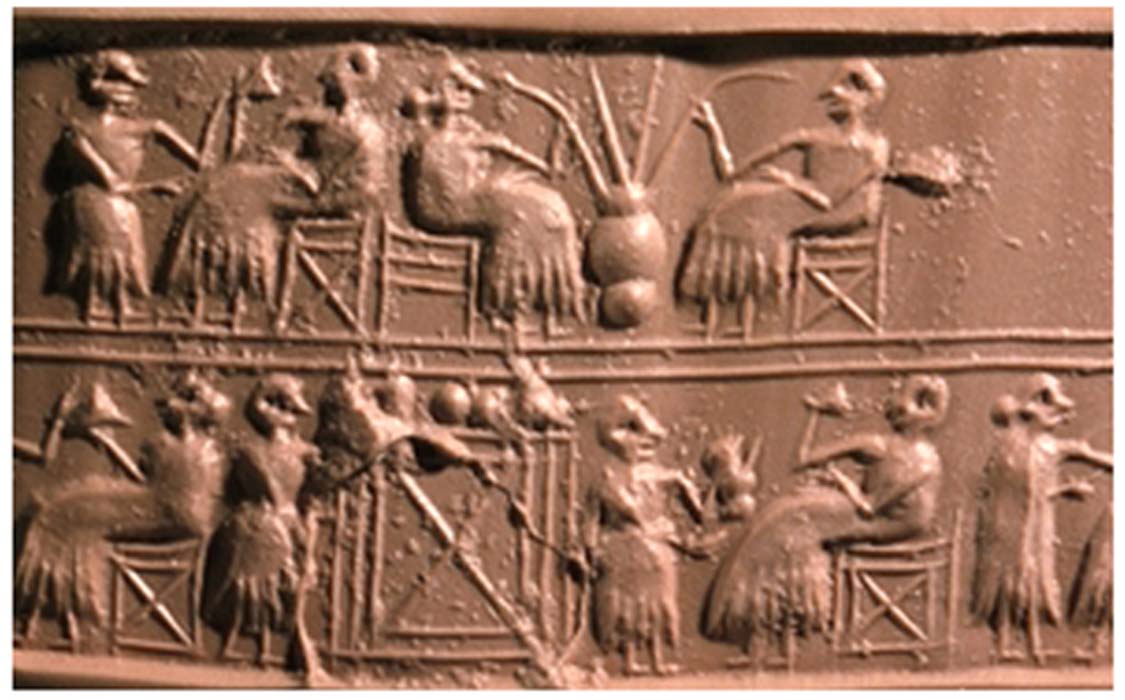 Perhaps she was Ninkasi, the Sumerian goddess of beer, or maybe one of the lesser deities (they had a bunch in that region, you know), but the poem Hymn to Ninkasi contains not only the requisite praises, but also an actual beer recipe http://etcsl.orinst.ox.ac.uk/section4/tr4231.htm. Beer became a staple in Mesopotamian diet; I would venture a guess that the entire civilization might have perished because of everyone being perpetually drunk. Another famous poem, Inanna and the God of Wisdom, reveals the dangers of intoxication, as the two deities are drinking beer together, as depicted on numerous clay tablets, and Enki, “Mr Wisdom,” gets so drunk that he blurts out the sacred MEH – laws of civilization (https://www.jamieoliver.com/features/baking-beer-bread).

Ancient Egyptians had their own deity connected to beer – Hathor, the goddess of music, laughter, the sky, and gratitude. An inscription at Hathor’s temple reads “The mouth of a perfectly contented man is filled with beer” (I have many friends who could relate to that!). However, just as in Mesopotamia, beer brewing was a female trade. Records state that the builders of pyramids were issued beer three times a day, as a part of their rations. Do we have any volunteers to go build pyramids? Anyway, when Cleopatra, who had instituted the first beer tax in the world (clever administrator as she was!) brought her fondness of beer to Rome, the Romans tasted it, collectively pronounced “Meh…” and continued drinking wine. Disappointed, Cleopatra went back to Egypt, and we all know what happened to her.

From that point in time, beer and bread, even though they are brothers, have parted ways. The Mediterranean world stayed with wine, but the Celtic people took to beer like to mother’s milk. Let’s not forget, however, that beer as liquid bread has started with Hymn to Ninkasi, the first recorded beer recipe in the world, and Ninkasi herself starts by making beer bread:

Ninkasi, it is you who bake the beerbread in the big oven,

and put in order the piles of hulled grain.

To make my variation of beer bread, you need only three ingredients: flour (I use spelt, which for our purposes is gluten free, but if you have an allergy to gluten or a caeliac disorder, please ask your physician), agave syrup, and beer (duh!). My son, who travels to Dublin on business frequently, has informed me that beer bread requires Guinness Stout; it’s a law in Ireland. As I don’t know the first thing about  beers, I trust my son.

Dump all this into a bowl without ceremony and do what Ninkasi did:

… handle the dough with a big shovel, mixing, in a pit,

the beerbread with sweet aromatics.

Unless you make beer bread for the entire Mesopotamian region, you don’t need a big shovel; regular mixing spoon will suffice.

Shove it in the oven for 30 minutes, and divine aroma wafting throughout the house will make it a challenge to wait for your delectable, soft, sweet and nutty bread to be topped with your favorite spread, while still hot. Feel free to give it to children, as it is not alcoholic. Why? Because alcohol bakes off, so you can eat your beer safely.