This is my humble contribution to the National “Italian Food” Day, as announced by Foodimentarycom.

Where do newlyweds go on their honeymoon? To all kinds or romantic places, right? And what is more romantic than Rome, where even the word romantic comes from? Imagine a legendary couple (the term celebrity wasn’t trendy yet), both of them world famous movie stars, “America’s Sweetheart” and “The King of Hollywood,”  enjoying their honeymoon in romantic Rome, stopping for a quick bite at a nondescript little restaurant on Via della Scrofa, and coming back to America with a recipe that has since become as beloved as they were.

Here they are, in 1920, embarking on their voyage across the Atlantic. And here is a very short compilation of rare documentary footage.

Mary Pickford and Douglas Fairbanks, the Hollywood royalty, happened to walk into an ordinary restaurant owned by one Alfredo di Lelio.  A little while before that momentous event, signora di Lelio had been suffering from morning sickness – happens to married women sometimes! – and wasn’t able to keep any food down. Her husband, looking for something neutral,  tossed some butter and Parmesan with plain, or white pasta, pasta in bianco,  and his grateful sposa gobbled it up.  Since she ate this concoction daily – the poor lady couldn’t eat anything else! – he figured he might as well put it on the menu. So he did,  dressing whatever in-house pasta they prepared with butter and Parmesan. 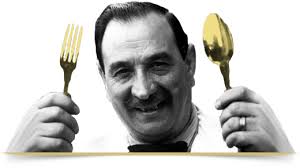 On the day the stars appeared, signor Alfredo was serving fettuccine. They loved it, asked for the recipe, and brought it back to the U.S.  Gracious as usual, they sent Alfredo a gold fork and spoon set engraved “To Alfredo the King of the Noodles.” Fettuccine Alfredo became famous  – in the U.S.! – and so did Alfredo’s restaurant.

This is one of the most exciting events that have ever happened to me. Statistically, the chances of something like this happening are so minuscule as to make one believe in pure coincidence. I don’t believe in coincidences, though, so I think there is a message here somewhere. A while ago, I posted this recipe for Penne Tofu with Impostor Alfredo.  In my post, I mentioned the history of the famous Alfredo sauce which I pieced together from several sources, but mainly this one:  http://www.huffingtonpost.com/Menuism/the-origins-of-fettuccine_b_4590831.html .  The very next day, among other comments, I received this long and fascinating article written by the granddaughter of Signor Alfredo di Lelio – THE Alfredo!

I’ve always loved it, though, and I don’t care who calls it what! Altogether, I love cheese, but it doesn’t like me. I am constantly looking for substitutes, and none of them work for me – neither for cooking, nor for noshing.  Until, that is, I came across this miraculous substance – nutritional yeast. I won’t tell you that it tastes like cheese, but with some additions and some tweaking, it tastes delicious.

I used gluten free penne pasta. First of all, I couldn’t find gluten free fettuccine, and secondly, the only reason fettuccine became a part of the recipe was that it happened to be there on the propitious day of the stars’ visit.

While the pasta was cooking – and it only took a few minutes to make it al dente – I decided to turn it into a main dish, which meant I had to figure out some non-invasive protein to toss in. I quickly cubed and stir-fried some Extra Firm tofu.

While all of that was cooking and frying, I threw some nutritional yeast, garlic, and lemon juice into the food processor, thought about it some more and added coconut milk and pre-soaked cashews which I was actually getting ready for something else. I pulsed it, and scraped the sides, and pulsed again, and scraped again, added salt and pepper, and pulsed some more.

Eventually, I got something smooth and creamy, a little darker than Alfredo sauce, and not exactly the same taste, but very tasty nonetheless.

In less than ten minutes my pasta was ready and drained, the tofu cubes nicely browned, so all I had to do was to toss it all together, sprinkle some fresh basil on top, and pour a glass of chilled Victor Lazio Chardonnay. Preceded by a delicious Florentine salad (to see recipe, please click here), we had a delightful Italian dinner.

P.S. There was also a No Bake No Dairy Choco-Blueberry cake for desert – please click here!

-Reviews, Advice & News For All Things Tech and Gadget Related-

The answer to the age old question, “what the hell is wrong with you?”

Exhortations from Psalms and other books of the Bible! Paraphrases, information, etc!

Primrose Stuart
Travels and Tomes: One Expat's Amblings and Ramblings

About travel, food, family, and the quirks of living abroad in Germany, England, and Turkey.

This site is about the knowledge of different categories such as education, , health, mobiles, and tourism

Cannabis and everything related to it.

Sharing personal topics concerning my walk of faith by grace

..and she was blessed with paint and a brush and told to go colour the world in all shades of Life.

Satisfy your taste buds with the best!

Politics from a professional culinary perspective

The Writings of Patrick S. Smith

✨✨Cute and beautiful is life ✨🥰

Life is a rusty rollercoaster

One man and his mind, trying to make a sense of it all

zany dog exploits - and other tails