Nobody seems to know where the word borscht came from. The best guess is that it is a combination of schti (Russian cabbage soup) and buryak (beetroot in Ukrainian).  It is first mentioned in the legend about the two-month siege of the Ukrainian fortress Rohatyn by the Crimean offshoot of the Turkish army in the beginning of the sixteenth century. Trying to feed several hundreds of hungry people, including women and children, the Cossacks, defenders of the fortress, collected every edible vegetable (root vegetables, as it was winter) and put them into meat broth. When they ran out of meat, they went vegan and kept cooking only vegetables: carrots, potatoes, beets, cabbage, and beans. It was warm and filling, and it sustained the population for two months. Unfortunately, the defense was broken, Rohatyn was taken, and many captives were transported to a slave market in Constantinople.

Among those captives was a beautiful fifteen-year old redhead Anastasia Lisowsky, lovingly called Nastia (some sources claim that her name was Alexandra, which is reflected in the world famous serial The Magnificent Century). Together with some other girls, she was selected for the harem of the future Sultan Suleiman who later gained worldwide fame as Suleiman the Magnificent, or the Lawgiver. There, she was at first called simply Roxelana, or Ruslana, which means Ukrainian. It was Suleiman himself who gave her a name Hurrem – “the joyful one.” She became his favorite consort and soon gave him a son, Mehmed. But she wasn’t brought up to be a concubine, and she was too ambitious to be one of many in a harem. She had boundless energy and aspired to be involved in social projects.  The Sultan showered her with riches, and she wanted to use her wealth for public welfare. Her first project was a hospital for women near the place that still held horrific memories – the old slave market. 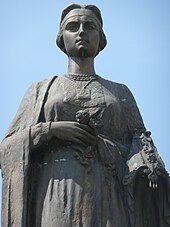 This is Roxelana memorial in Rohatyn.

However, there was an obstacle. Only free citizens were allowed to sponsor public projects, and she was still technically a slave. Beloved, wealthy, the mother of a prince, but a slave! She appealed to the Sultan. Suleiman was so impressed by her desire to improve the lives of his subjects that he immediately granted her freedom. But the next time he came to her room, she wouldn’t let him in! “You are the Sultan of Muslims, I am a free woman, we are not married, so I can’t let you into my bed.” He ranted and raved, but she was right, and the unthinkable happened: they were married in a magnificent formal ceremony, violating a two-hundred-year tradition forbidding a sultan to marry a concubine and for the first time in history elevating a former slave to a status of an empress, Hazeki Sultan. 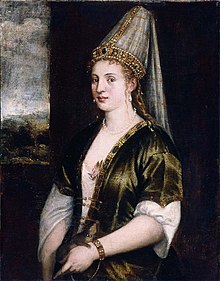 This is her portrait at the age of about 48 by Titian, titled La Sultana Rossa.

Hurrem was influential in the state affairs, which was unprecedented in those times, but she never abandoned her interest in women’s social welfare. Schools, hospitals, and soup kitchens for the poor and needy earned her undying respect and love of the population. Under his pen name, Muhibbi, Suleiman composed many poems to his beloved.

Throne of my lonely niche, my wealth, my love, my moonlight.
My most sincere friend, my confidant, my very existence, my Sultan, my one and only love.
The most beautiful among the beautiful…
My springtime, my merry faced love, my daytime, my sweetheart, laughing leaf…
My plants, my sweet, my rose, the one only who does not distress me in this world…
My Istanbul, my Caraman, the earth of my Anatolia
My Badakhshan, my Baghdad and Khorasan
My woman of the beautiful hair, my love of the slanted brow, my love of eyes full of mischief…
I’ll sing your praises always
I, lover of the tormented heart, Muhibbi of the eyes full of tears, I am happy.

In defiance of yet another tradition, Hurrem was allowed to have more than one child. And every time she became pregnant, she craved the comfort food of her motherland, the soup of the siege, the borscht. This might be a legend, since there are records of Hurrem requesting quail and rahat lokum (“Turkish delight”) when she was with child, but no records of borscht being cooked in the palace kitchen. Or perhaps the Turkish cooks simply didn’t know how to make it? But we do!

First, we boil carrots and beets. I make a pareve borscht, without meat, but you can do it the Cossack way and throw your veggies into beef stock. We boil them for quite a while, until they are very soft.

Meanwhile, we prepare the rest of the vegetables: shred cabbage, peel and cut potatoes, and get the beans ready.  You can use any beans you have at hand. I prefer a combination of red beans and sweet peas.  Once your carrots and beets are cooked, fish them out of the pot and throw the rest of the veggies in. Let carrots and beets cool off while the other veggies are cooking.

Grate your cooked carrots and beets (I use a food processor) and mix them with tomato sauce. I make my own tomato sauce by simply buying overripe tomatoes, whenever I come across them, pulverizing them in a blender and simmering until the sauce thickens. Then I freeze it for further use. At this point, you can also add fresh parsley, together with chopped stems. Mix it all up, add it to the pot, and stir.

Seasoning time: pareve soup mix, salt and pepper, and the all-important combination of lemon juice and sweetener (I use xylitol). It is the latter that makes the borscht!

Bring it to boil one more time, stir again, and your borscht is ready. We had it often in winter time, even though in Odessa there wasn’t a real winter. But we always made it for Chanukkah, perhaps because of its combination of sweet and sour flavors, or maybe because it looks so festive. To me, it is comfort food, the same as it was for Hurrem Sultan. She lived an extraordinary life and ended it, surrounded by her adoring husband, children and grandchildren.

I don’t think she ever got her borscht, though, and anyway, this is only a legend, one of many about this incredible Ukrainian woman who had a Jewish secretary and exchanged letters with Christian kings.

Serve your borscht with sour cream (Tofutti for me) and some raw garlic, as the tradition demands, and delight in the richness and beauty of this simple “siege soup.”