I have a long-standing love affair with Florence, Italy. It is my second favorite city in the world, after Yerushalayim, or course, and on par with my native Odessa. Listen to its name – Firenze! – and imagine walking, breathing, eating and drinking art.  You are literally walking on art because the streets are paved with stone tablets on which apprentice sculptors practiced their technique. Stone worksheets – and rather than throwing them away, prudent florentines found an artistic solution. Florence, the cradle of Renaissance, where Jews were invited, welcomed, and protected as savvy financial partners by Cosimo de Medici, the famous merchant prince who managed the papal finances. 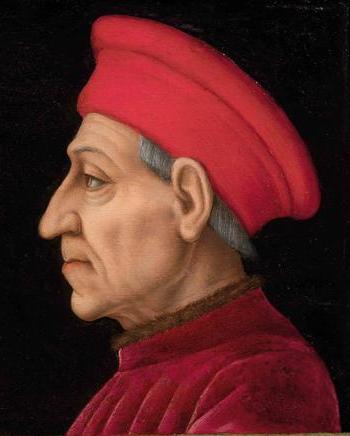 Since the 14th century, Jews in Florence linked their fortune to the House of Medici. When the fanatical monk Savonarola blamed the Jews for the plague epidemics – what’s new, right? – Medici’s protected the Jews. Conversely, when the Medici’s themselves got in trouble and had to give up their stronghold for a couple of decades, the Jews of Florence were also ordered to leave. They stayed, though, and loaned money to Florence, thus helping to bring the Medici family back.  A timely bribe in the right hands has always worked.

Cosimo’s grandson, Lorenzo Il Magnifico (the Magnificent), a famous humanist, art patron, a powerful leader, and the founder of Plato Academy, was probably the most influential figure in making Florence a living, breathing masterpiece of a city it has stayed up till today. 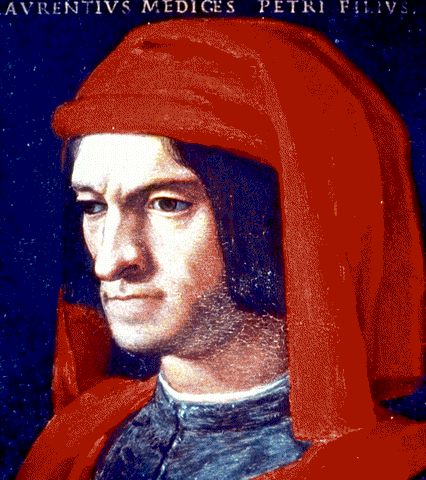 Lorenzo and his Plato Academy had even stronger connections with Jews, benefiting from Jewish learning and  Torah values. One of the noted philosophers, Pico della Mirandola, even learned Hebrew, to be able to study the Jewish concept of creation of man. His thesis “On the Dignity of Man” is universally considered the Manifesto of Renaissance. There was even a rumor that he converted to Judaism after studying Kabbalah, but no proof was ever found. Incidentally, if you heard that the Medici’s themselves were Jewish, that has been confirmed… as not true.

Anyway, I am in love with Florence and everything Florentine. When Michelangelo was leaving Florence for the first time, he stopped on one of those hills of Tuscany overlooking this gem of the city, and he cried,”I don’t want to die outside of the sight of Duomo!” He did, unfortunately, die in Rome, but the Duomo is still there and is still breathtaking. It literally takes my breath away every time I catch a first glance of it when approaching the Piazza del Duomo. 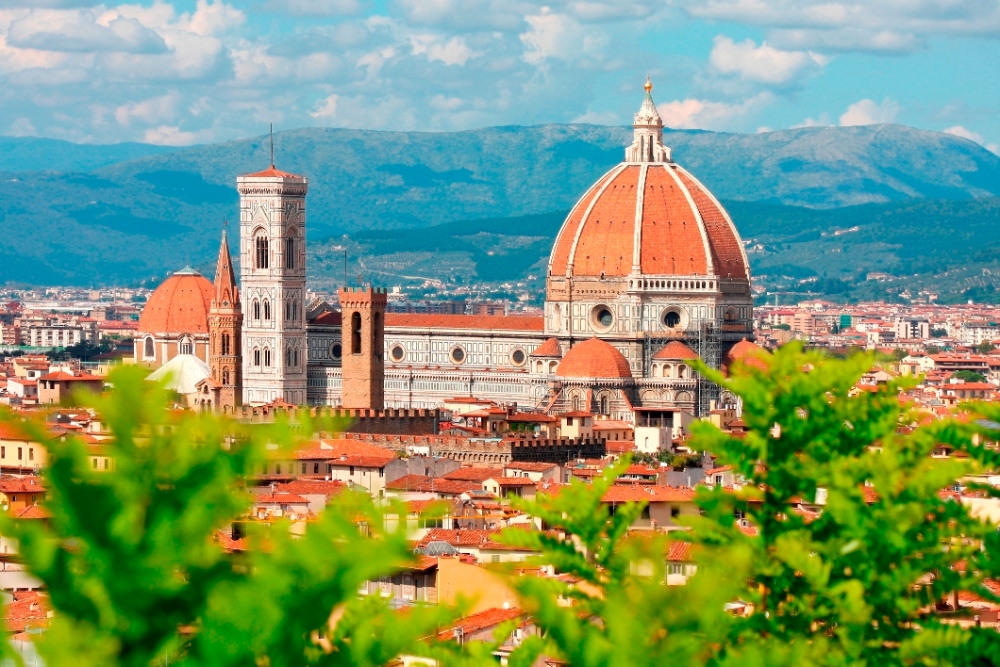 The Jews of Florence were grateful to the Medici’s. Jewish scholars and physicians were revered, and one of them, Yaakov Abrabanel, was instrumental in settling in Florence Jews from Spain and Portugal who were escaping from inquisition.

The Great Synagogue of Florence was built later, in 19th century, and the Rabbinical College established there. It is rightfully considered one of the most beautiful synagogues in the world. 80 different colors of marble,  found in the hills of Tuscany, form its intricate mosaics, while stripes of travertine and  granite create a majestic impression,  Il Maggiore, as it is called by non-Jews. It was those non-Jews of Florence who saved the majority of their Jewish friends and neighbours from the Nazis, diffused the explosives meant to destroy the synagogue by the retreating German occupants,  and helped the Jewish community restore the building’s grandeur. 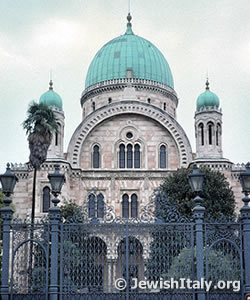 Spending Shabbos in the midst of all this beauty was one of the most uplifting experiences of my life. The food was also incredible (I hear that the fleishigrestaurant is now closed, but the dairy one is operating). One of the cute shticks Florentine Jews did way back when the synagogue was built was adapting the traditional Tuscan Pollo Fritto (fried chicken) to Chanukkah, of all holidays! Oh well, they figured, anything fried in oil is good for Chanukkah. It is a well-known recipe, in many different variations, and it involves cutting a whole chicken into pieces and marinating it in lemon juice before dipping in egg, dredging through flour, and frying. Easy, right? Wait!

My recipe is adapted from the Exodus Russian Jewish magazine, which in turn adapted it from – you guessed it! – the Jews of Florence. So first of all, no whole chicken. We are going all healthy here, and we use only boneless skinless chicken breast. 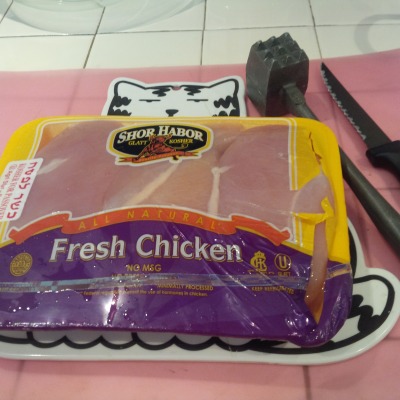 Do you see my meat tenderizer? Get ready to kill. Open each breast at its thickest side, flatten it down, and hit it! Flip it over and hit it some more. Cut into approximately 1-inch pieces.

Place those pieces into a bowl and sprinkle with spices. I use cinnamon, cumin, paprika, allspice, and sumac, in addition to salt and pepper, but you can add anything you like. 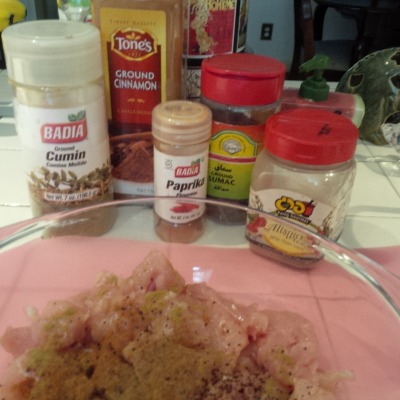 Next, comes the actual marinade. Drench it in lemon juice and add some dry white wine, for good measure. I think that’s where we, in Odessa, learned to cook with wine – from Italians and from French. Add a tablespoon of olive oil, otherwise it might be too dry. Mix everything, making sure that all pieces are covered equally with spices and marinade. 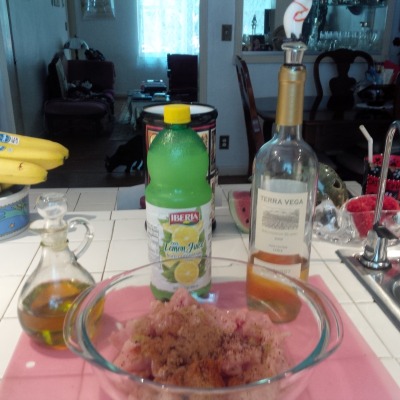 You’ve abused the poor chicken enough, beat it up, cut it in pieces, introduced alcohol to it – let it rest already. Cover and let it sit for an hour or two, or even better, refrigerate overnight. When you are ready to cook, whisk a couple of eggs and mix in some flour (I use whole wheat). 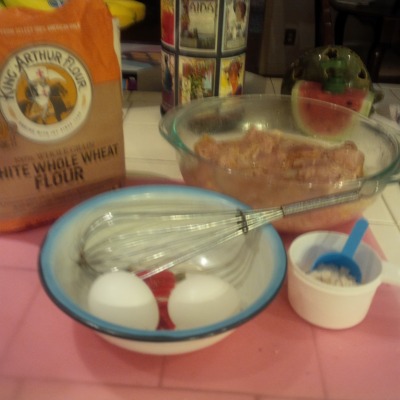 Pour egg and flour mixture into marinated chicken and mix really well to coat all the pieces. Now you can spray your frying pan with oil and preheat it. My motto is: “We try not to fry,” so I prefer to use the griddle and a very light dusting of oil. Use a large spoon to pour this stuff onto the pan or griddle, forming sort of “chicken latkes.” 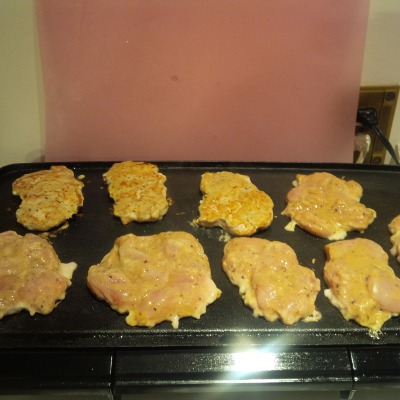 Flip them the moment they start turning golden. Do not overcook and make sure they don’t fall into separate pieces. It shouldn’t take more than a minute or two. Meanwhile, prepare a shallow baking pan by first lightly dusting it with oil and then covering its bottom with orange or apple juice.

Transfer lightly fried Pollo Fritto Artistico from frying pan or griddle onto the baking pan. Bake uncovered at 350 for 20 minutes. If you plan to serve them on Shabbos or Yom Tov, you’ll need a deeper baking pan and more juice on the bottom. You’ll also have to first bake uncovered before Shabbos, to make them look pretty, and only then cover the pan. 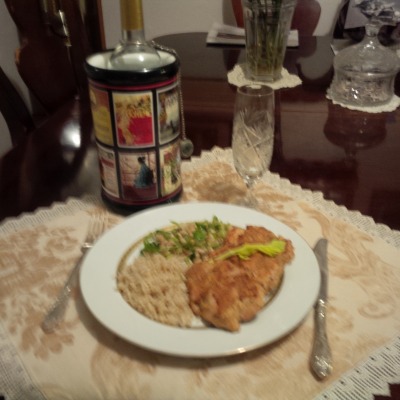 Here it is served with brown rice and Florentine Salad (to see the recipe for Florentine Salad, please click here). A dry white wine with citrus notes goes very well with it, such as Tuscan Sauvignon Blanc, but I have not seen a kosher Italian Sauvignon Blanc. Bartenura imports Tuscan red wines that are great with beef and heavy tomato sauces, but shouldn’t be paired with fruity, lemony chicken. There are, however, excellent kosher Sauvignon Blancs from Chile, Argentina, and New Zealand, as well as one produced by  Hagofen winery  in Napa Valley, California (more costly, but worth it).

This is definitely not your bubbe’s shnitzel! I don’t do it for Chanukkah because I have my family traditional Chanukkah menu – lo mir darleibn, and you’ll see! – but I made it first for Sukkos, and my father loved it, and that’s good enough by me, so BUON APPETITO!

Tips to lose your weight faster and safe

My Thoughts My Prayers My World

welcome to my blog!

Get rid of ignorance. Let's share what we know and strive to quench the thirst of knowing..

Site Title
A Song of Joy by Caroline Furlong

Escape To The World Of Words

A practical guide to budgeting.

Free Muslim Dua for Love back and solve all problem

Get your Lost love back in just 2 days by Islamic Mantra. contact us on call and Whatsapp

Rantings of an over emotional and over thinking mind..Hop on and ride along!!

A Girl that Stands Out

Law of Attraction finds me!

MASTERY OF MY OWN CIPHER

Chin up, crown on!

Welcome to My Fun, Magical Disney Imagineering Blog where you will be Imagineering with Mickey Mouse and Mic Mouse Under One Disney Universe known as Adamiah

My life, travels and lessons in the Wilderness

A closer view can change your point of view

Simplicity is the ultimate sophistication.

DHW to the best

a collection of trivia, fun facts, humor, and interesting notions.

A feminist who writes not much about feminism, teehee

It All Starts Inside.

Saree Love and Other Stuff

This is music and its industry, and this is me trying to understand it. Join me, as we discuss music - one song. At a time.

Get Healthy! Get Lean! Discover Ketosis!