This is the story of a proud little island that has been fighting invaders and enslavers for several centuries. We’ll go back to 1492, when Columbus, supposedly, discovered America. What he actually discovered was a tiny island in the Carribean called Ayiti by its native Taino people (you can read about it here). Taino was governed by five caciques, or kings, two of whom, Bohechio and Caonabo, are important to our story.

This fascinating young woman, Anacoana, the sister of cacique Bohechio and wife of cacique Caonabo, greeted Columbus on his second visit in 1496, together with her brother, and participated in diplomatic talks as an equal co-negotiator. Relationships were friendly to the extent that both brother and sister took a ride on Columbus’ caravel and were royally entertained (Casas, Historia de las Indias). They were just as royally deceived (s***d is the word that comes to mind!), because in return for their gifts of food and cotton, called “tributes” in Columbus’ report, their land was swiped from right under their royal noses and their people enslaved. 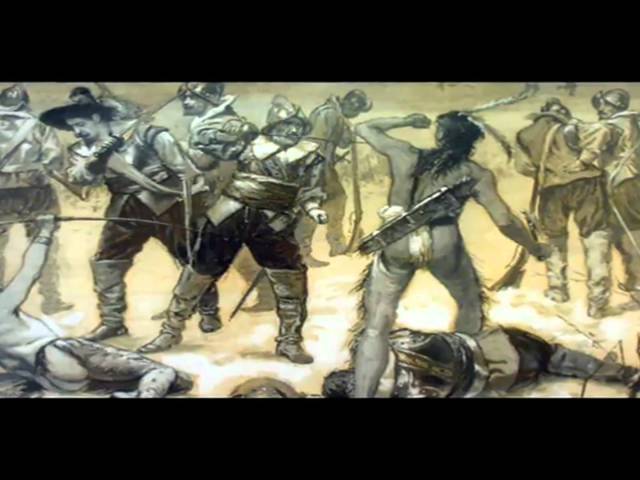 The little island erupted in flames. Led by the two caciques, close to ten thousands of the formerly mild and hospitable Tainos burned the settlements, established by Columbus, and killed the invaders who, apparently, considered native women and gold part of the “tributes” (F. Columbus, The Life of the Admiral Christopher Columbus by his son Ferdinand). Columbus, who had earlier gushed, “there are no better people in the world” (ibid.), retaliated by killing or capturing most of those people, including both caciques, who were sent to Spain in chains, but perished in a shipwreck.

Anacoana, whose name means Golden Flower, became a warrior queen. Surviving Tainos retreated into the mountains and started a war that lasted several years, until in 1503, during the meeting of 80 chieftains, including Anacoana, the Spanish Governor Ovando ordered to set the meeting house on fire.  Those who escaped from inferno were arrested and executed for “having conspired to resist the occupation” (Casas, ibid.) And if this sounds unbelievable, Queen Anacoana, who was 29 at the time and gorgeous-looking, was offered a dubious honor of joining a household of one of the conquistadores as his concubine. The little Golden Flower prodly refused and was publicly executed by hanging,  while the male chieftains were afforded an honorable death – the firing squad.

Forged in fire, the legend of the gentle Golden Flower, an accomplished poetess and composer of ballads turned warrior queen, has spanned the Caribbean, inspiring songs, books, and names of fancy resorts.

Candela! Fire! Fire! The famous Buena Vista Social Club, a legendary Cuban jazz band, had its own share of trouble with Fidel Castro’s opressive regime (you can watch some of it here).

Less famous but no less fabulous was The Buena Vista Sisters Club called – guess what? – Anacoana. However, as the image of the valiant queen spread like wildfire, her home, the little island named Hispaniola by Columbus, now housing two countries, Dominican Republic and Haiti, kept being invaded, occupied and exploited. The independent Republic of Santo Domingo, or Dominican Republic, was eventually, albeit briefly, occupied by by the United States from 1916 to 1924. As the American soldiers went around enjoying delicious native foods, they exclaimed, their mouths full of mashed plantains, “Man, this is good!” which the disgusted dominicanos heard as “man good.” Poking subtle fun at the unsuspecting occupants, they dubbed their favorite side dish Mangu (http://cosmopolitan-foodies.blogspot.com). There is another theory, coming from Cuba, where this same dish is called Fufu, apparently of African origin, but I like the Dominican story, as it shows that the spirit of resistance is still burning bright on the little island that fought. 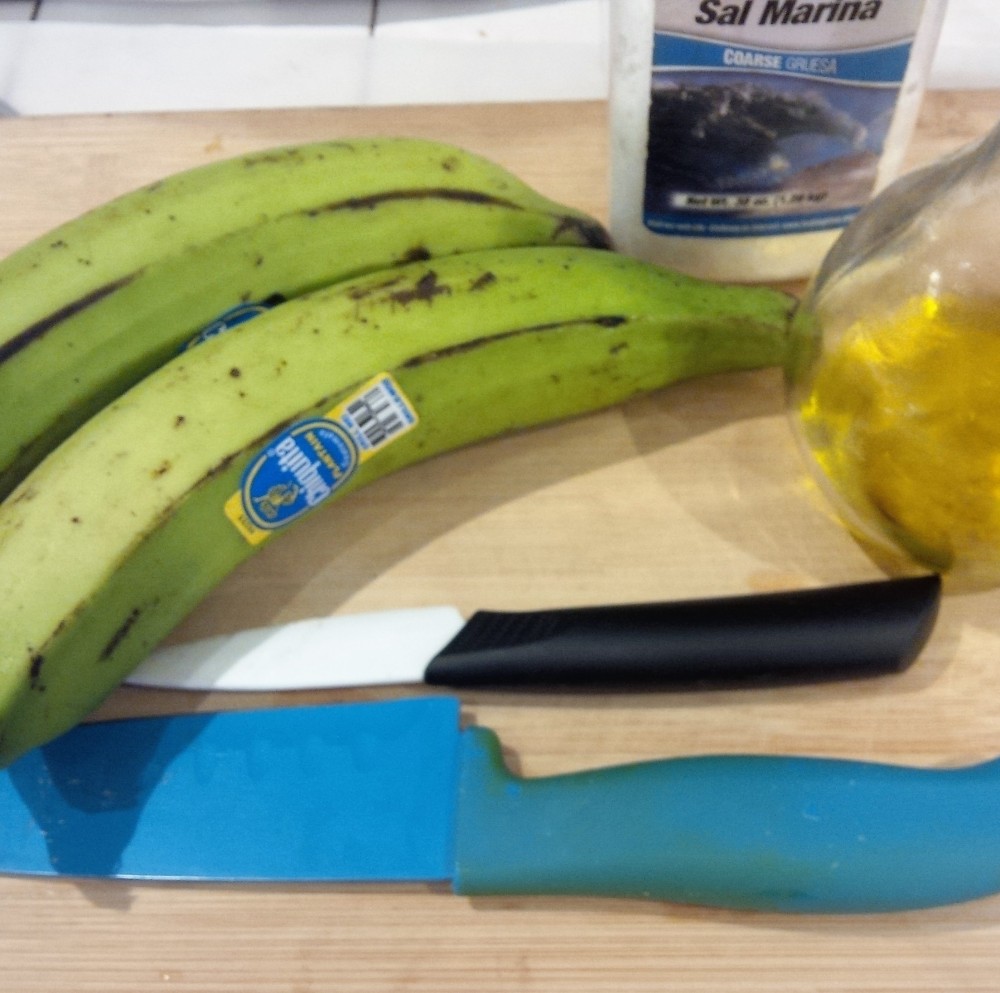 A proud dominicana, a worthy descendant of Anacoana, my student Antonia Gomez shared her Mangu recipe with me. You start by peeling green plantains and boiling them in water, with a pinch of salt and some olive oil. Think mashed potatoes, minus gluten. 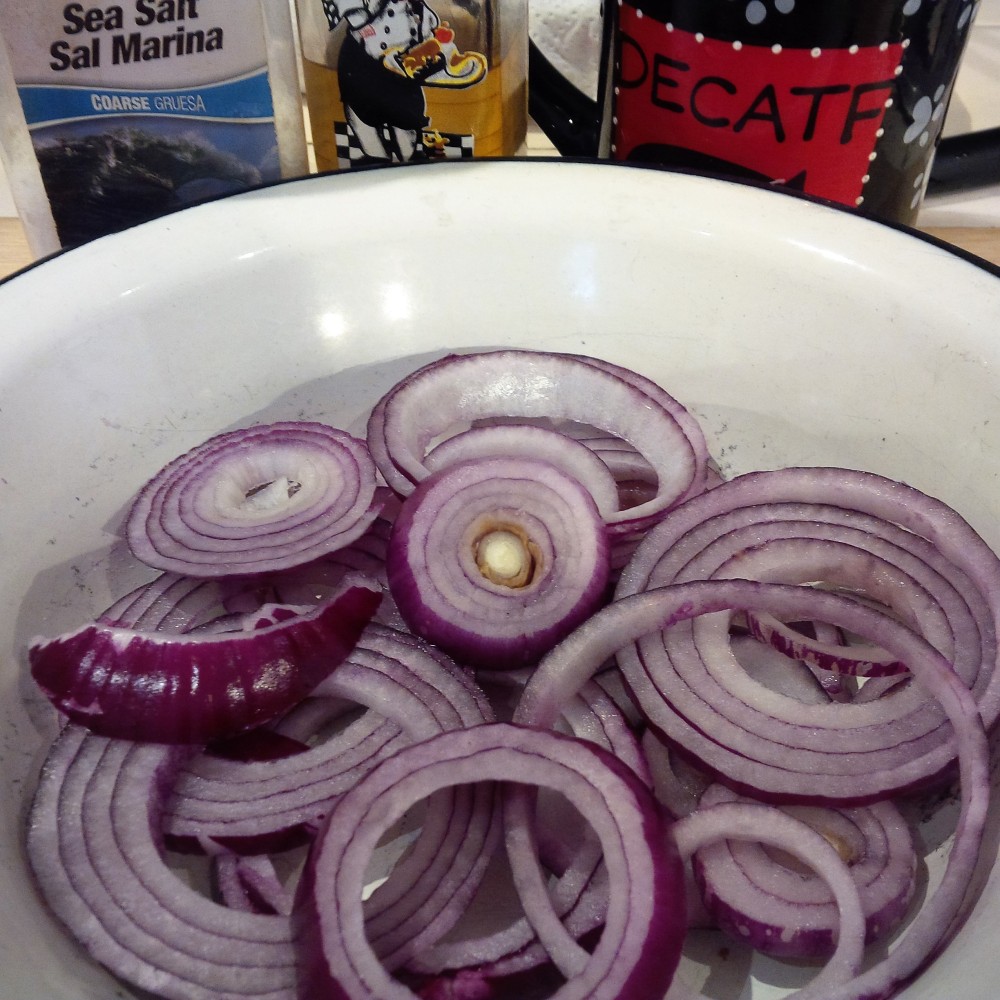 Meanwhile, you can start on your Mojo sauce. Cut a red onion into circles, cover them with vinegar, and sprinkle salt over them. Mix them well and let them marinade for at least 30 minutes. 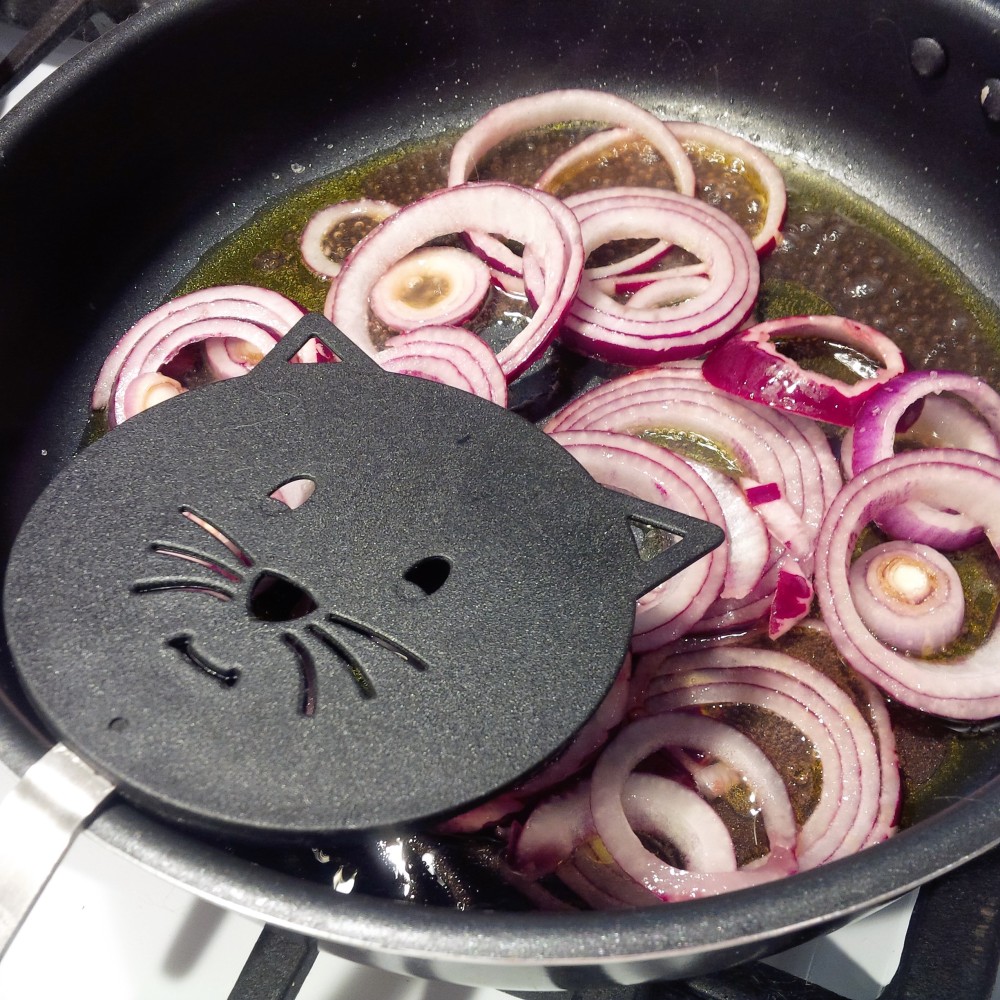 By that time, your plantains should be almost ready, so you spend the next few minutes sautéing those marinated onion circles in olive oil, vinegar and salt included. If you are adventurous (some like it hot!), you can also add jalapeno peppers cut into thin circles. About five minutes is enough to soften onion circles and release some more liquid. 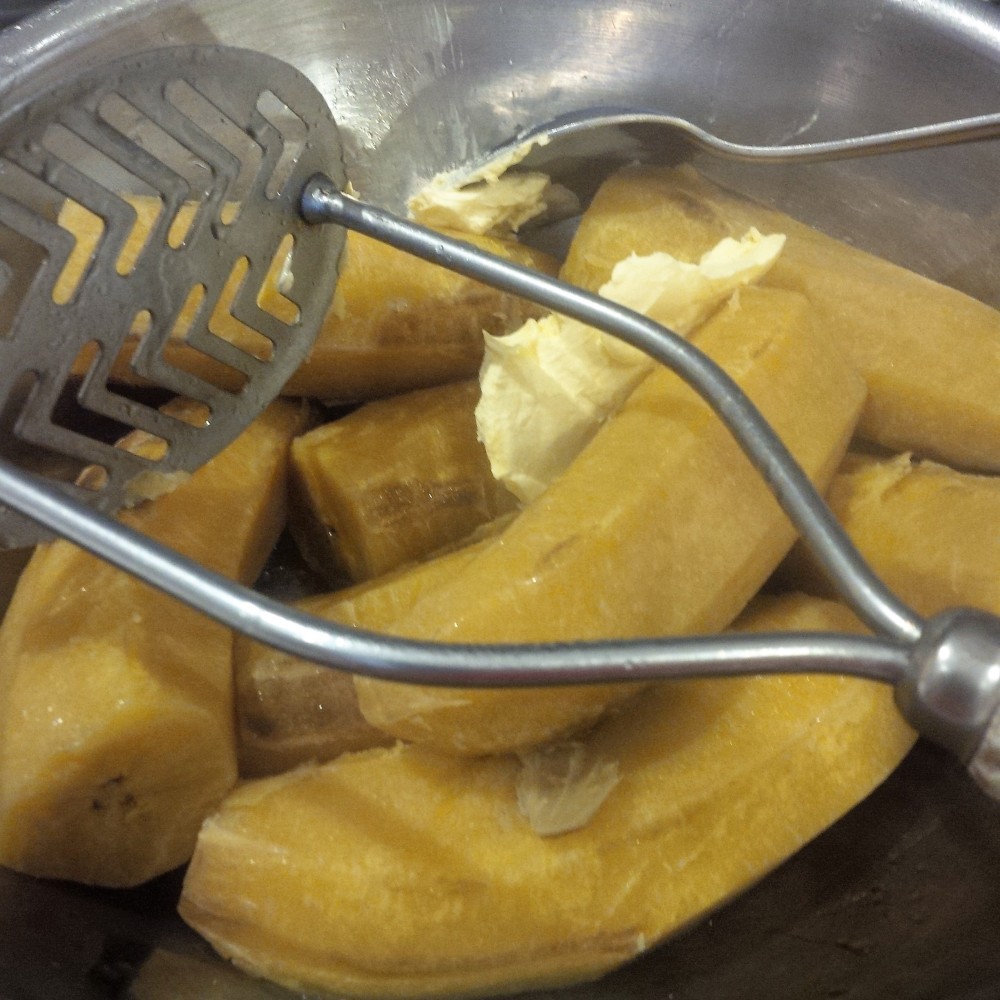 Now your plantains are soft and ready to be mashed. Fish them out of water, but save some water to add during the mashing process. Plop a heaping tablespoon or two of any butter substitute of your choice (I use Smart Balance) and start working your potato masher. Keep adding that delicious Mojo sauce, minus the onions. 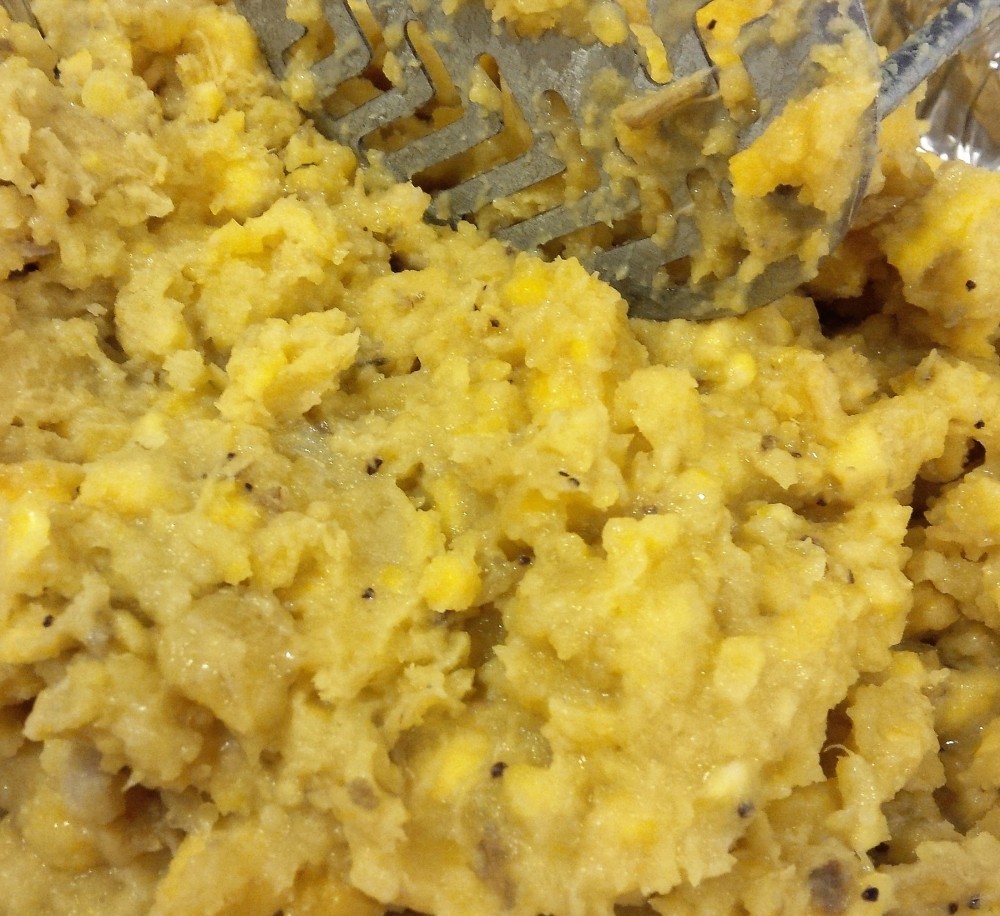 Make it as smooth or as chunky as you like, or add some more Smart Balance and make it creamy, like real mashed potatoes. 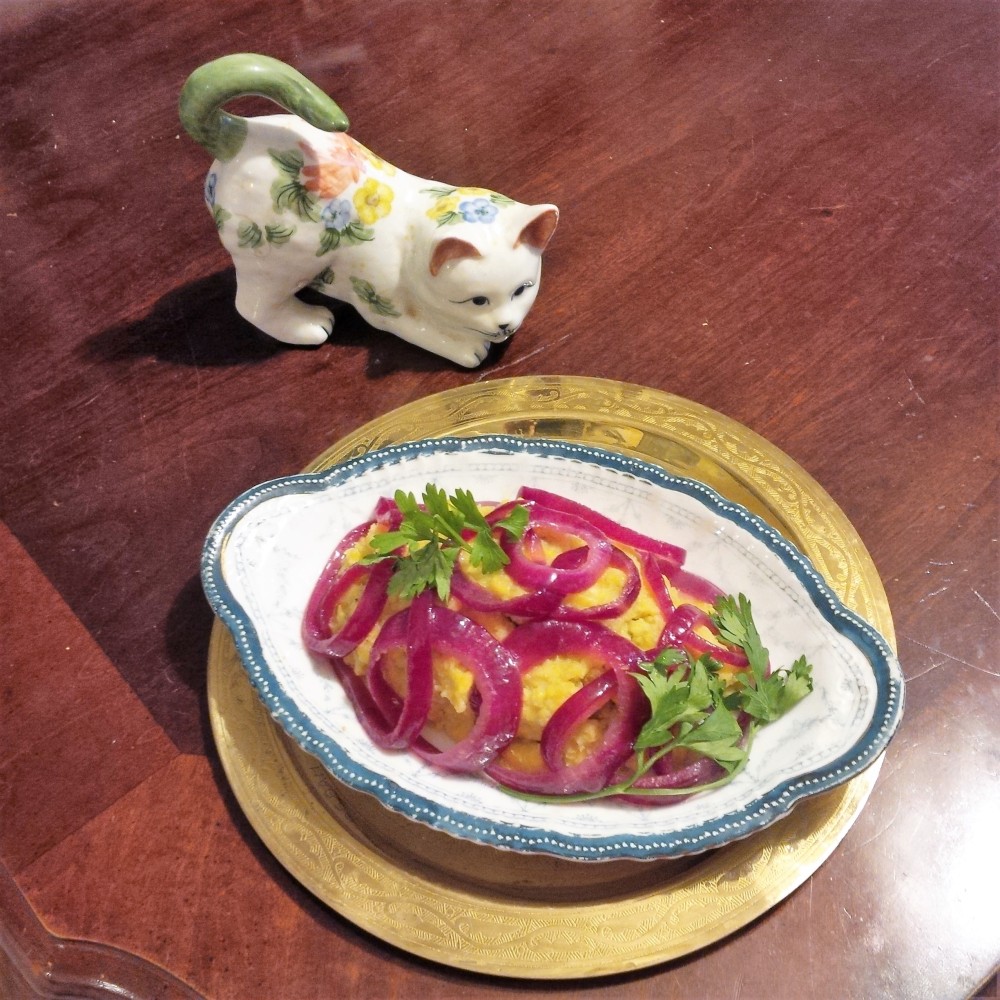 Garnish with soft and tangy Mojo onions and serve hot with real or fake chicken, meat, fish, or even fried cheese, the Dominican way. And when you impress your family and friends with this simple, but scrumptious creation, don’t forget to mention the little island that had to fight its way to independence for five centuries and its Golden Flower, the heroic Anacoana.

Let the beauty of what you love, be what you do.