Frosted with courage, encrusted with sparkles of genius – for a very special number, 2000+ followers of this blog, I present to you a very special, very scientific cake named after Mikhail Lomonosov, a true Renaissance man of 18th century Russia. Before you meet him, though, I want to thank all of you, my amazing 2000 followers, my dear blogofriends and great supporters – without you, this wouldn’t have been possible, and my gratitude is boundless! I also want to acknowledge lovely Seema of  https://destinationinfinite.wordpress.com/, a talented artist and poet who was my 2000th follower. And now, meet The Father of Russian Science – Mikhail Lomonosov.

You see this nineteen-year old kid from a little fishing village on the White Sea coast making his way on foot through the frost of Russian winter, walking for three months to cover 600 miles (almost 1,000 kilometers) from his native Kholmogor to Moscow in search of education, specifically to study sciences. He had tried to go to school in Kholmogor, but as a fisherman’s son, he was turned down. His neighbor, a kind man, had taught him to read, and he read voraciously, but his stepmother, a simple peasant woman, kept berating him for being lazy. He later wrote that  he “was obliged to read and study, when possible, in lonely and desolate places and to endure cold and hunger” (https://russiapedia.rt.com).

So he lied. He pretended to be a nobleman’s son and thus was able to enter the Slavic Greek Latin Academy. Having conquered one obstacle, he still had another one to surmount – language. Surprisingly, Mikhail Lomonosov, later a great poet and writer, the author of grammar that reformed Russian literary language, did not speak real Russian when he came to Moscow. A native of Pomor territory (pomor literally means “one who lives near sea”), he grew up speaking Pomor, a Russian-Norwegian pidgin developed because of the flourishing Russian – Norwegian trade. As is the case with most pidgin languages, the Russians thought they were speaking Norwegian, while the Norwegians were sure they were communicating in Russian.

None of it was very helpful to the budding scientist in Moscow, but in a very short time, he not only learned “proper” Russian, but also managed to master Latin and Greek, and all of it while surviving on bread and kvass for 3 kopeks a day.  Thirsty for science and not getting any, he went to study in Kiev for a while, learned Ukrainian, but not finding science education there, came back to Moscow, at which point he simply covered a twelve-year course of studies in five years.  His brilliance noticed, he was accepted to St Petersburg Academy, then sent to Germany to study. Finally, he was getting to his main interest – science, but meanwhile, he learned German language, studied literature and philosophy, and started composing poetry both in Russian and in German.

Catherine II of Russia visits Mikhail Lomonosov in 1764. Painting by I. Feodorov.

A true polymath, a chemist, physicist, mathematician, astronomer, geographer, writer, poet, and artist who restored the ancient art of mosaics, Lomonosov was so venerated by Catherine the Great that she would personally visit his laboratory and examine his latest discoveries. It was she who dubbed him “the Father of Russian Science,” the highest title to which anyone could aspire. 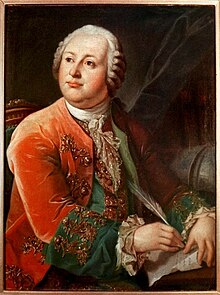 In honor of a little brave fisherman’s son who stopped at nothing in his search for knowledge, I created this cake. It is, to the best of my knowledge, pretty close to a traditional Norwegian recipe, while the festive sparkles are reminiscent of colorful Russian peasant costumes worn during village holidays.

To make it non-dairy, I use homemade prostokvasha (clabbered soy milk) – you can see the recipe here, or use any non-dairy yogurt or kefir. Of course, you may also use real yogurt and make it dairy, in which case it will be even closer to the old Norwegian recipe. I use spelt flour, which is gluten free for our purposes, but if you are allergic to gluten or have celiac disorder, do consult your physician. I also use Smart Balance instead of butter and brown sugar instead of white refined sugar. Most certainly, 18th century Norwegians did not have coconut milk, but we do, especially the chocolate one. Catherine the Great loved hot chocolate, but I am quite sure nobody had heard of it in Pomor villages. Nonetheless, it’s my celebration and my cake, so I have taken the liberty to follow My Rules of Dessert: 1. It’s not dessert of it’s not chocolate, and 2. The more chocolate, the better. So in goes chocolate coconut milk, as well as some cocoa powder.

Mix it all up, add a dash of cinnamon, and send it to the oven for about 45 minutes to an hour. Meanwhile, let’s have some real Norwegian music – one of my favorite composers, Edvard Grieg.

While the cake is enjoying itself in the warm oven, let’s remember that three-month long frosty trek and make delicious chocolate frosting.

You can whisk an egg, but I love aquafaba, and whip it to a nice peak, with xylitol and vanilla extract. Gently work room temperature Smart Balance and unsweetened cocoa powder into it, and you have chocolate frosting that the Tzarina of All Russias, Great, Small, and White (that was her official title) would have loved!

Make sure your cake is completely cooled off before spreading frosting and encrusting it with candy sparkles (today’s word prompt is ENCRUSTED https://dailypost.wordpress.com/prompts/encrusted/).

I wish I could offer it to you, Beautiful People, all 2000+ of you, this supremely soft and moist, frosted with courage and encrusted in genius, very scientific Lomonosov cake!