Rabbi Gershom ben Yehuda, widely known as Rabbeinu (our teacher) Gershom, lived in 10th century. He can’t really be called a Renaissance man, since he pre-dated Renaissance by a couple of centuries, so let’s call him a pre-Renaissance man. Like some other medieval Jewish scholars, he was also a scientist, a mathematician, a physician, and as a profession, he created highly artistic, unique jewelry. Rabbeinu Gershom was married to a wonderful lady called Devorah, but, to their sorrow, they had no children. After years of trying (and not getting any younger!), Devorah suggested that her husband take a second wife. He did. They had a son, if you want to know, but it bears no relevance to our story.

It is said that we usually bring our own misfortunes on our heads. One day, Rabbeinu Gershom happened to describe King Solomon’s legendary golden throne to his friend King Basil. Well, you know how kings are – like little kids: I want the same! And you make it for me! King Basil, though, was no King Solomon, and there wasn’t enough gold in his treasury for this project. He did, however, find enough silver, and the project commenced. However, the wise Rabbeinu was far from enthusiastic. He had warned the king that he could not vouch for the integrity of his helpers, and some silver might go the wrong way. The king, fired up with the idea, did not even want to hear it.

It took several years, but the incredible mechanical silver throne was produced. On each of the six steps leading to the actual chair, a pair of animals extended a foot as the king ascended, and when he sat down, a silver eagle brought down a crown and held it over his head. A miracle of miracles, a wonder of wonders! Only one person was unhappy, the King’s closest adviser, who kept whispering into the royal ear all kinds of suspicions about the amount of silver allegedly stolen in the process.  “We need to weigh the chair, to be sure, ” he said, and the king agreed. There was only one problem: there wasn’t a scale big enough, and nobody would undertake constructing one.

But the master himself, Rabbeinu Gershom, knew how to do it.  “It is so simple, – he said to his second wife, – put it on a boat, mark the waterline, take it off the boat, mark the new waterline, take a bunch of stones and fill the boat to reach the chair’s waterline, then weigh the stones. Easy!” “Wow!” – exclaimed the lady who was quite a socialite, and immediately broadcasted the misplacement theory all over the palace. Thus the chair was weighted, and found lacking in weight as compared to the silver issued from the treasury. The wonderful artisan was imprisoned in an isolated tower without food or drink, to die of starvation.

During the night, he heard someone crying. His first wife, his beloved Devorah, made a decision to die with her husband. And the great scientist and inventor came up with the solution on the spot. “Nobody is going to die! – he said, – get me these five items, and we’ll live happily ever after.” She got all five: a woodworm, a beetle, a silk thread, a rope, and a cord. You can figure out the rest. The worm was let loose to crawl up the wall, the beetle chased after it, a silk thread was attached to the beetle, a rope to the thread, and finally, the cord was delivered to the window, and the prisoner escaped.

Without going into many details, Rabbeinu Gershom and his faithful wife Devorah did live happily in Maintz, Germany, where he established the first center of learning in that region and earned a reputation of a foremost legal authority, “The Light of the Exile.” Among some of his famous legal rulings, valid today, is the decree against polygamy. Can you blame the man?  Another, less known one, is the prohibition to open and read other people’s letters. With e-mails, text messages, and sundry social media today, this law becomes extremely relevant!

What does all this have to do with food? In addition to all his other accomplishments, The Light of the Exile was not adverse to culinary delights. Specifically, he mentions Fludn, or Fluden, flat cakes stuffed with nuts and honey, sometimes mixed with little dough balls called Teigelach (diminutive from teige -dough), served on most Jewish holidays.  He cites the Talmud, although the Talmud does not specify the filling, but the dessert is supposed to symbolize manna, and the two crusts surrounding the filling represent the two layers of dew protecting manna on both sides. 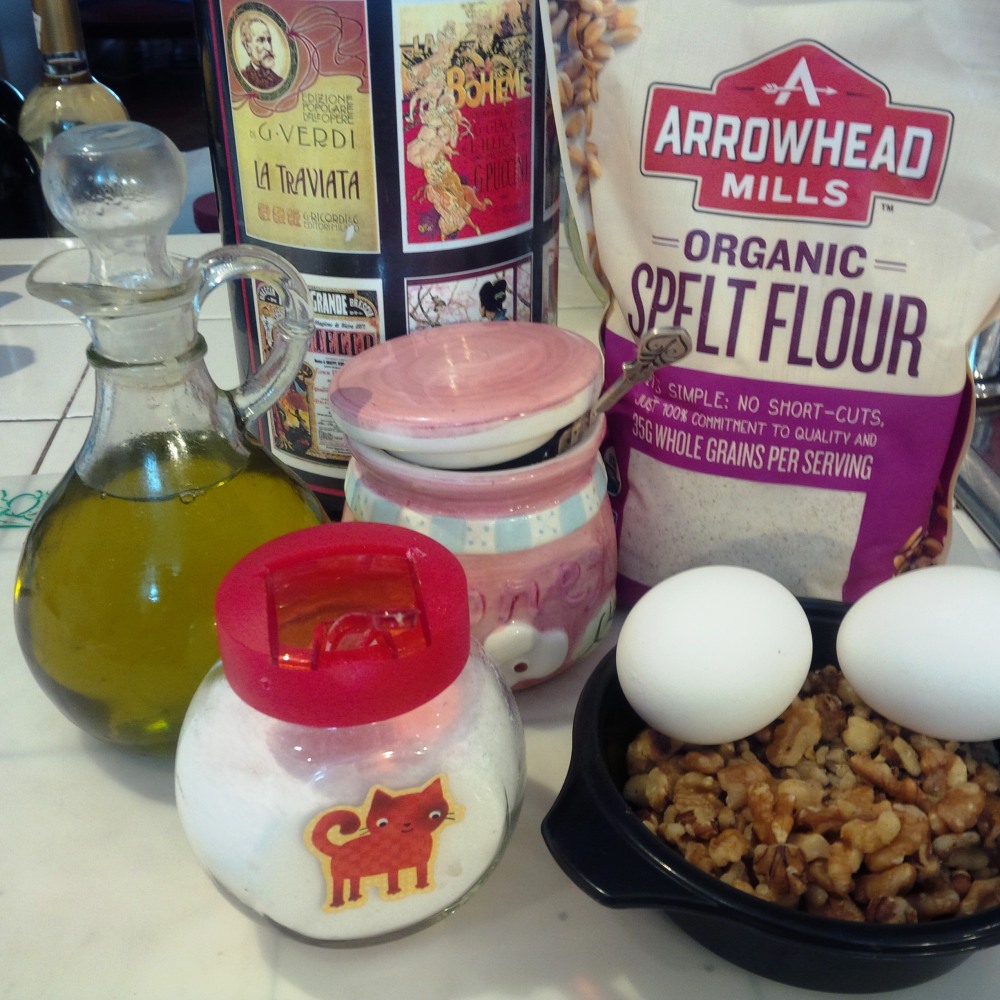 Let’s make teigelach first. Just mix flour with eggs, water, and olive oil, add a bit of sugar or xylitol, and knead. I use spelt flour, so I am calling it gluten free, but please consult your physician first.

Roll the dough into thin ropes and cut the ropes into small pieces. Now, you can leave them like that, or you can form squares or balls. I do balls for a simple reason: as children, we were allowed to roll them as a reward for good behavior. 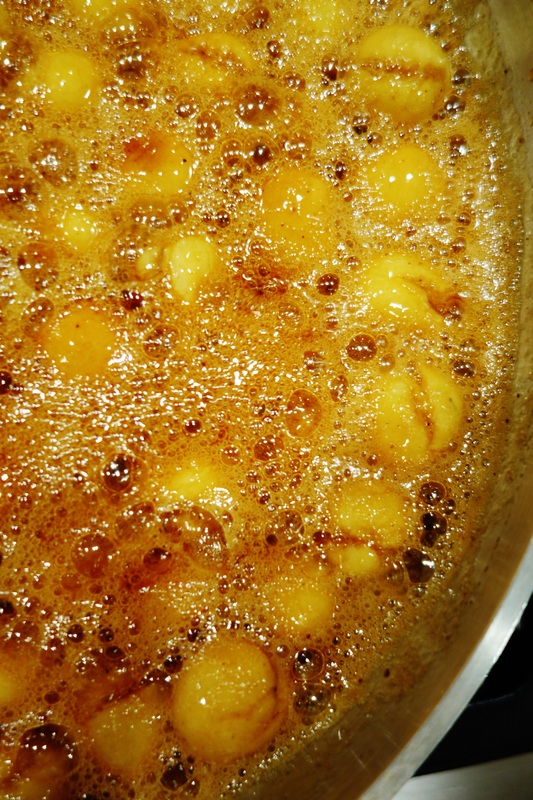 You can bake or deep fry them until golden brown. I prefer to deep fry, and it is one of the very few things I deep fry, but it takes only a few minutes, and they come out crunchier. You can use teigelach as croutons for soups and salads, or even as a cereal, but right now we are ready to make fludn.  To do that, you mix them with roughly chopped walnuts, honey, and some more olive oil, and bring it all to boil. Let this mess simmer while we discuss alternative shapes and forms.

Once the filling is ready, you can put it between two crackers, two thin cookies, or, as I have discovered recently, two little waffles. For Passover, we used matzoh meal to make teigelach and matzoh for layers. On Purim, we used leftover Homentashen dough for layers, cut fludn into triangles, just like Homentashen, and scribbled designs on top. I have discovered a fascinating article about the carved wooden forms used for fludn layers, some of them triangular for Purim, and some square or oblong, for other holidays (http://www.jewishgen.org/Bessarabia/files/familyMemoirs/IdaWeinhouseFluden.pdf). 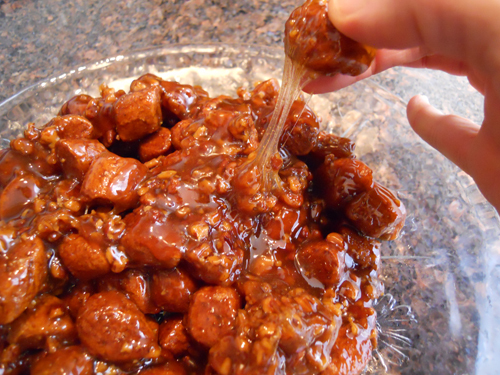 For High Holidays, however, and the subsequent Sukkos and Simhas Torah (Rejoycing of the Torah), we have always eschewed the flat fludn and fashioned a mound instead. Some recipes include raisins, dry fruit, or candied apples, but I follow my grandmother’s purist view: On Simhas Torah we celebrate finishing the yearly cycle of Torah reading and starting the new one, so it is only appropriate to serve a dessert that looks like Mount Sinai, “the most humble of all mountains,” without any frills, but also the sweetest, where the Law was given.

You Deserve to Conquer the World

13 but looking for ways to share my cooking, baking and writing experiences with you. Also don’t for get to check out my creative writing blog! https://thewriteholic.wordpress.com/

I read books. Sometimes, I tell you about them.

“You only live once, but if you do it right, once is enough.”

Keeping You in the Loop

Top stories of the week

Sharing From A Sincere Heart

Gastroenterologist at The University of New Mexico Health Sciences Center

Taking the journey, bumps and all

A Garden of Sonnets

Drawing My Fantasies
The Bach

Me, my scribbles and my ego

GET UP! your ability is greater than your disability

Spilling secrets from the stove

Never argue with stupid people , they will drag you down to their level

Latest books and Technology|Monthly reviews on movies and webseries|Podcasts |Web design|Tips on YouTube & etc...|I will Post on Monday , Thursday and Saturday 😊

Making sense of it all. Stories that change us.

Exploring the world to every bit in a creative way

Helping others become even better versions of themselves