There was a Prince Pozharski, a famous personage who, together with a commoner Kuz’ma Minin, successfully defeated the false pretender to the throne Dimitry, rolled back a Polish-Lithuanian army and effectively cleared 17th century Russia of foreign invaders.

Here you can see the famous monument to both of them on the Red Square where sculptor I. Martos presented them as the heroes of antiquity. The inscription reads To Citizen Minin and Prince Pozharsky from the Grateful Russia.

One day, the Grand Prince of Moscow visited Prince Pozharski unannounced. The host wanted to offer such a distinguished visitor his favorite minced veal cutlets, but was informed that his kitchen ran out of veal. He promised severe punishment to the cook but meanwhile, ordered to substitute chicken for veal and keep quiet about it. The Grand Prince bought into the ruse and loved the dish. However, someone whispered something to someone else, that someone else was overheard by someone in the Grand Prince entourage, and the truth, as it often happens, came out. The Grand Prince didn’t get angry; on the contrary, he asked for a recipe to be given to his cooks and named the new dish after his host.

I got this story from an article How a Tavern Keeper Cheated the Tzar (http://www.edimdoma.ru/club/posts/228-istoriya-kotlet-pozharskogo-kak-traktirschik-tsarya-obmanul). As amusing as it is, it holds no water. The last Grand Prince of Moscow, who, through ruthless invasions and bloody massacres, upgraded his title to be crowned The Tzar of All Russias, was Ivan the Terrible. He was suspicious to the point of paranoia, he never went anywhere unannounced, he never tasted unfamiliar dishes, and he never liked, let alone loved any food to begin with. He was famously indifferent to food, eating greedily and sloppily when hungry, grabbing and devouring bits and pieces of various meats, sweets, fish, and pies which would always be first tried by his tasters, without bothering to put food on a plate, and stopping abruptly when he was satiated.  He flared into instant rages. He killed his son and heir (the famous I. Repin painting) for daring to make a comment. Would he forgive his host for having been cheated? I doubt it. Finally, Prince Dmitry Pozharski, a son of a minor provincial nobleman, was nowhere near Moscow at that time.

In the opera Boris Godunov by M. Musorgsky, you discover the beginning of “Troubled Times,” starting with the reign of Boris I who had been accused of killing “the child” Dimitry, a ten-year-old son of the late Ivan the Terrible. The Troubled Times (not the opera!) lasted for 15 years, encompassing two false Dimitries, figureheads of the Polish-Lithuanian invasion, and ending with enthroning of Michail Romanov and establishing the Romanov dynasty.  This is a Bolshoi production, and the title role is sung by the great Bulgarian bass Nicolai Ghiaurov. If you notice two young guys in tall white hats in the background, Dmitry Pozharsky might have been one of them, according to historical records (The History of Russia by I. Kostomarov).  His military career and ensuing fame occurred after Tzar Boris’ death, during the first invasion. Period. End of Chapter.

Next story, another Tzar, the same situation. Tzar Alexander I “The Blessed” stopped in a little town either on the way to France, chasing Napoleon, or on his way back, having defeated him.  Veal cutlets, ordered for his breakfast, could not be made because the inn where the Tzar stayed had run out of veal. The inn keeper’s wife Daria advised her husband Evdokim Pozharski to use minced chicken meat, fashion bread-crumb covered patties, and stick a bone into each one. The Tzar was cheated again (a typical Russian story!), the inn-keeper finally confessed, “It’s not my fault, she made me do it!”, the cutlets were named after him and included into the Tzar’s permanent menu, and the inn acquired a new sign “The Proud Supplier to the Table of His Imperial Majesty.”  Two problems with that: Daria was Evdokim’s daughter, not wife, and their inn was in a city of Torzhok, as mentioned by Pushkin:

At your leisure, have a dinner

Taste the cutlets fried in butter,

And proceed your way in peace. (translation is mine -DA)

You can’t argue with a classic, the father of modern Russian language!

Between the two royal legends, there is a humble one about a hungry Frenchman, an officer of Napoleon’s army, who stopped at Pozharski’s inn during the retreat from Moscow, had no money to buy his meal, and paid with a recipe. This one, although put in writing by Theophile Gautier, is so fantastic that every source I’ve seen calls it highly unlikely.

The real story involves yet a third monarch, Nicolas I, and no cheating takes place.  Daria Pozharski, depicted by T. Neff, is holding a baby Prince Volkonsky during Christening, having accepted him from the arms of the little Prince’s godmother, the Tzarina Alexandra, Tzar Nicolas’ wife. There is no doubt that this Tzar had once passed through Torzhok, tasted and loved the cutlets, and thereafter invited Daria to be a frequent guest in the palace. All of this is recorded in the palace chronicles. Nicolas I was a fiend for written records. 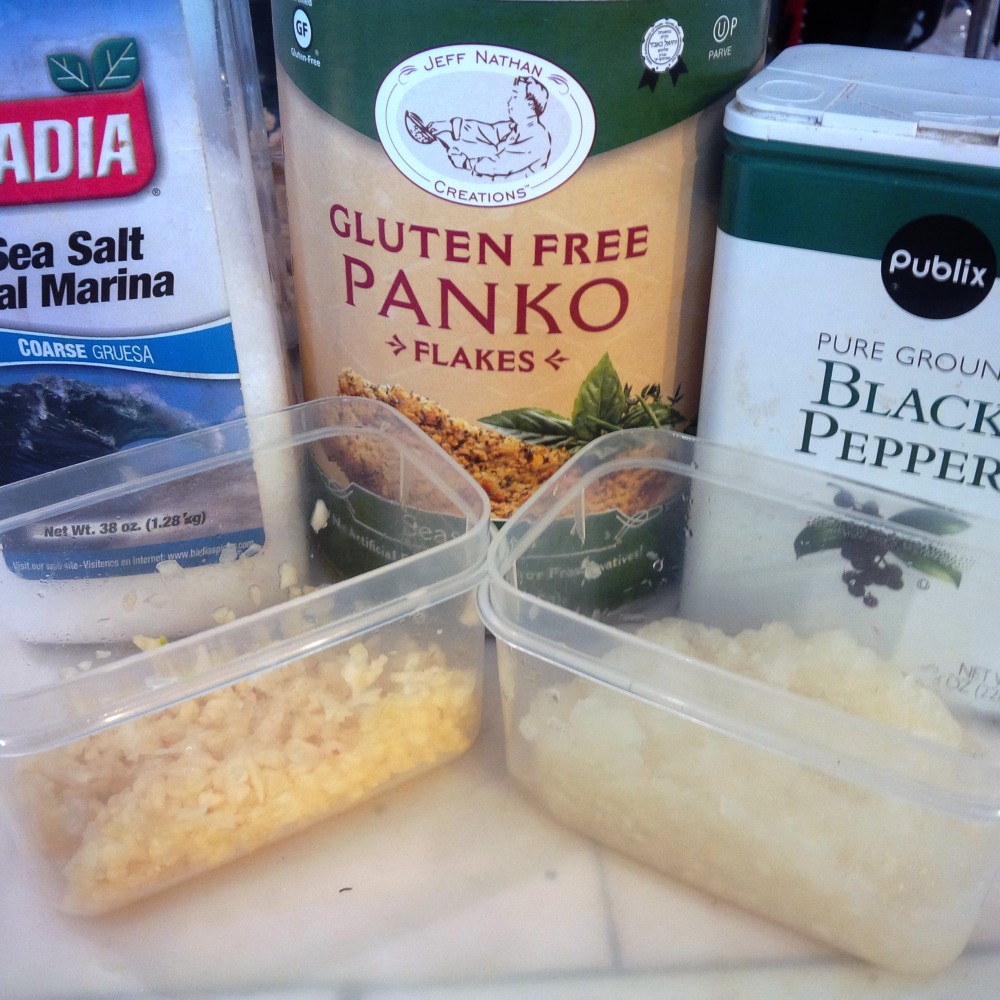 The first change I’ve made is using ground turkey instead of minced, diced, or ground chicken. Feel free to use chicken, though. However, using only chicken breast will make your cutlets too dry. Most recipes suggest combining chicken breast with dark meat, and that’s why I have switched to turkey – when you reach a certain age, you have to watch cholesterol intake. At this stage, it’s pretty simple: you need diced garlic and onion, bread crumbs (I use gluten free), salt and pepper. 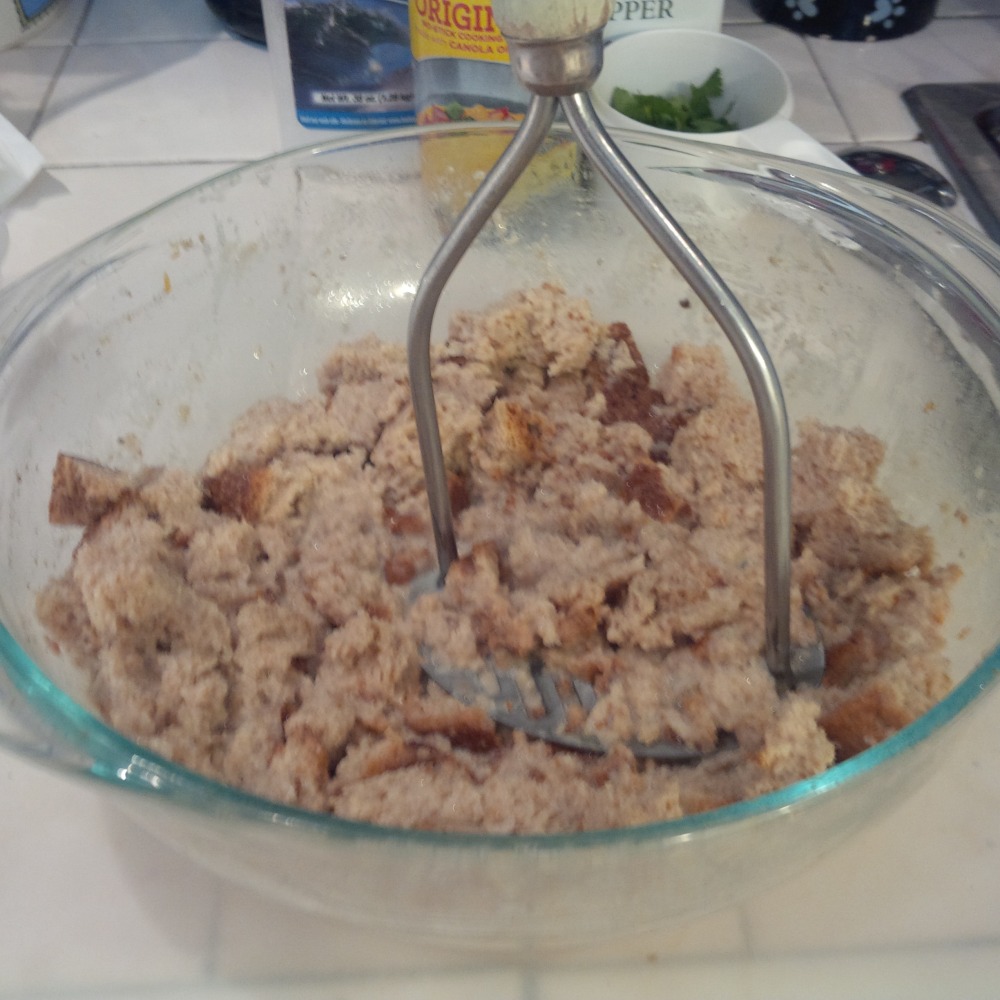 As with most Russian recipes involving ground meat, you’ll need to soak a couple of slices of bread and then mash them with a potato masher. I prefer to use soy or rice milk for soaking, but you can use any milk substitute of your choice or even water. I use whole wheat, multi grain, or gluten free bread, but it’s up to you. 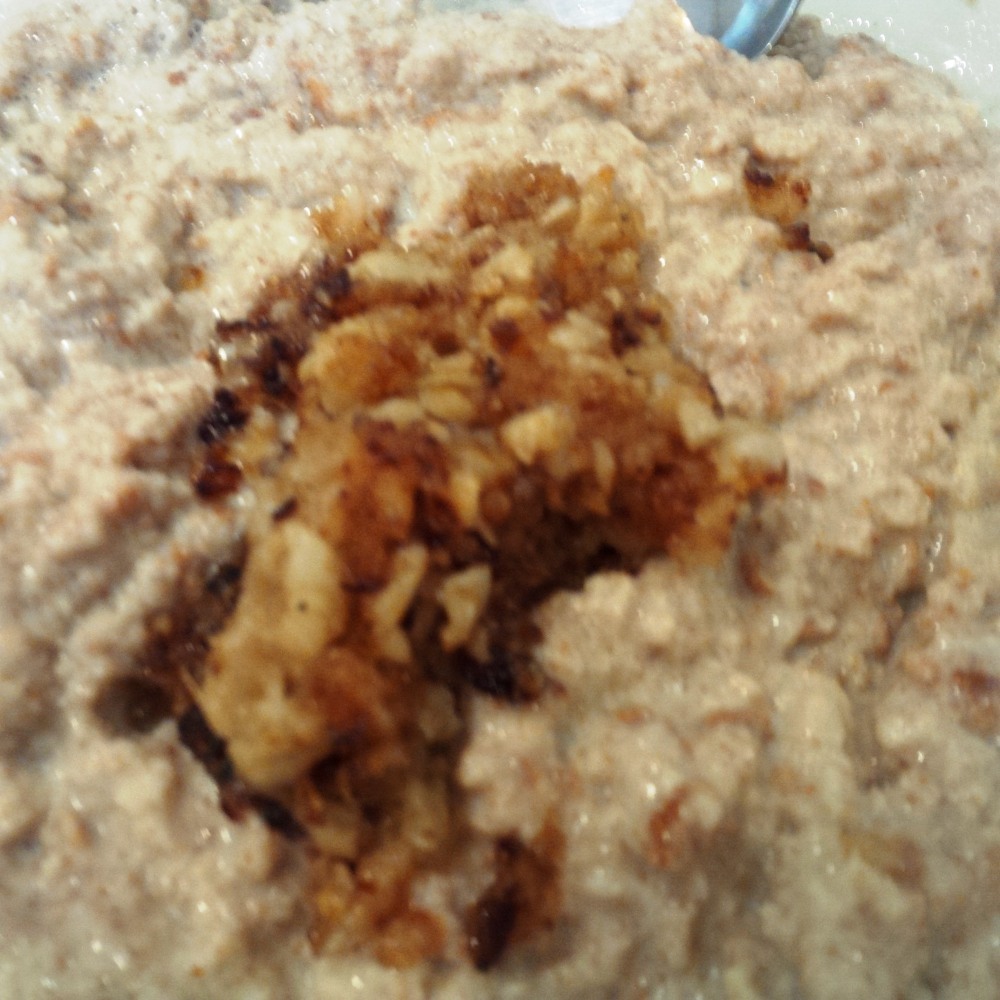 While the bread is soaking, you can saute onion and garlic together until golden brown. Add them to the mashed up bread, add your ground turkey or chicken, season with salt and pepper, and mix really well. I actually kneed it by hand, like dough, to bind it better, as there are no eggs in this recipe. 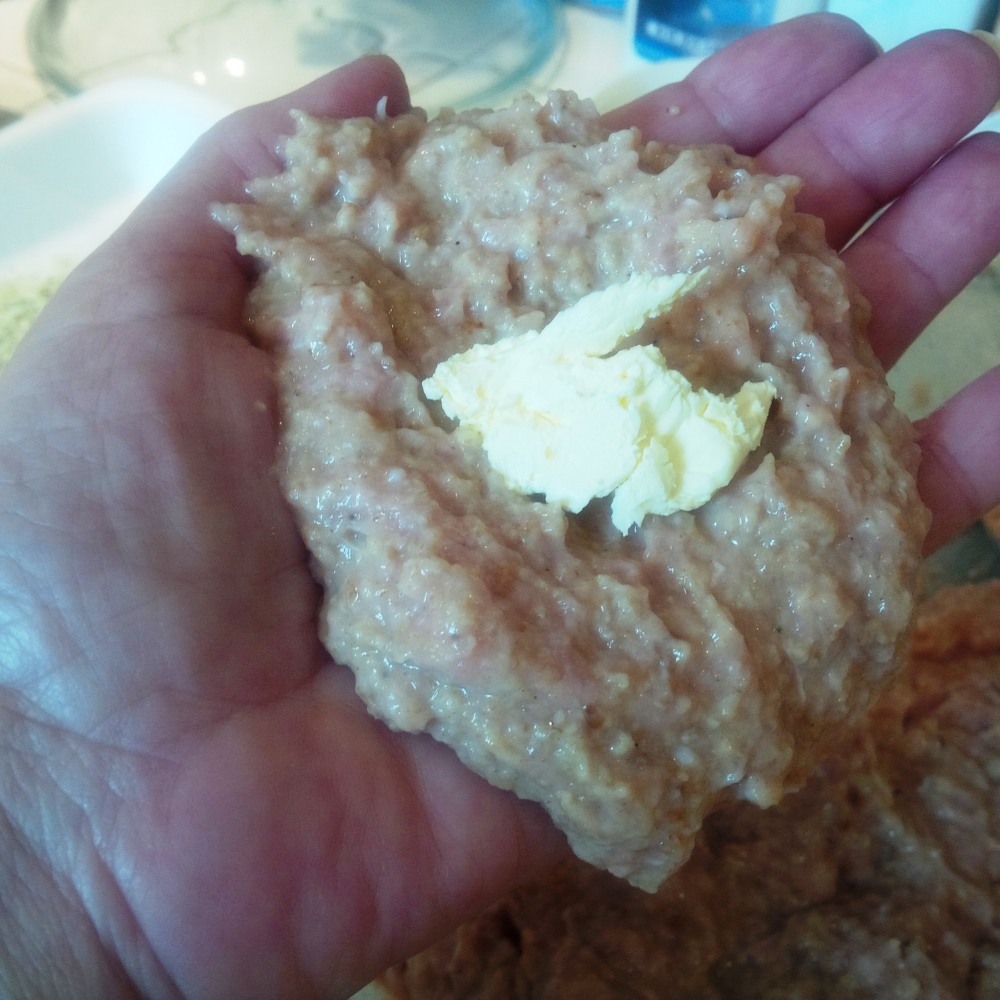 Here comes the more challenging part. Did you notice the “fried in butter part”? Pozharski cutlets, according to the original recipe, are not only supposed to be fried in butter,rather than oil, and then baked, but also have a glob of butter hidden inside, to make them more tender and juicy. Obviously, I don’t fry them in butter. As to the inside, I use Smart Balance. Remember, it has to be very cold, right out of the fridge, otherwise it’ll be very difficult to work with. Take a large tablespoon of the meat mixture and flatten it on the palm of your hand. Place a piece of not-really-butter, about 1/2 of a teaspoon, in the middle and envelope it in the mixture, forming a cylinder. Now, gently roll it in the bread crumbs. Don’t worry, you’ll get a hang of it in no time!

Another important change: I don’t fry them at all. I bake them in a barely misted with oil baking pan, with dry white wine drizzled between the cutlets. The rule of thumb is, use the wine you are planning to drink with the dish. First I bake them covered, and the wine evaporates and enhances the flavors, then I take the cover off, mist them with oil and send them back into the oven to develop that golden crust they are famous for. 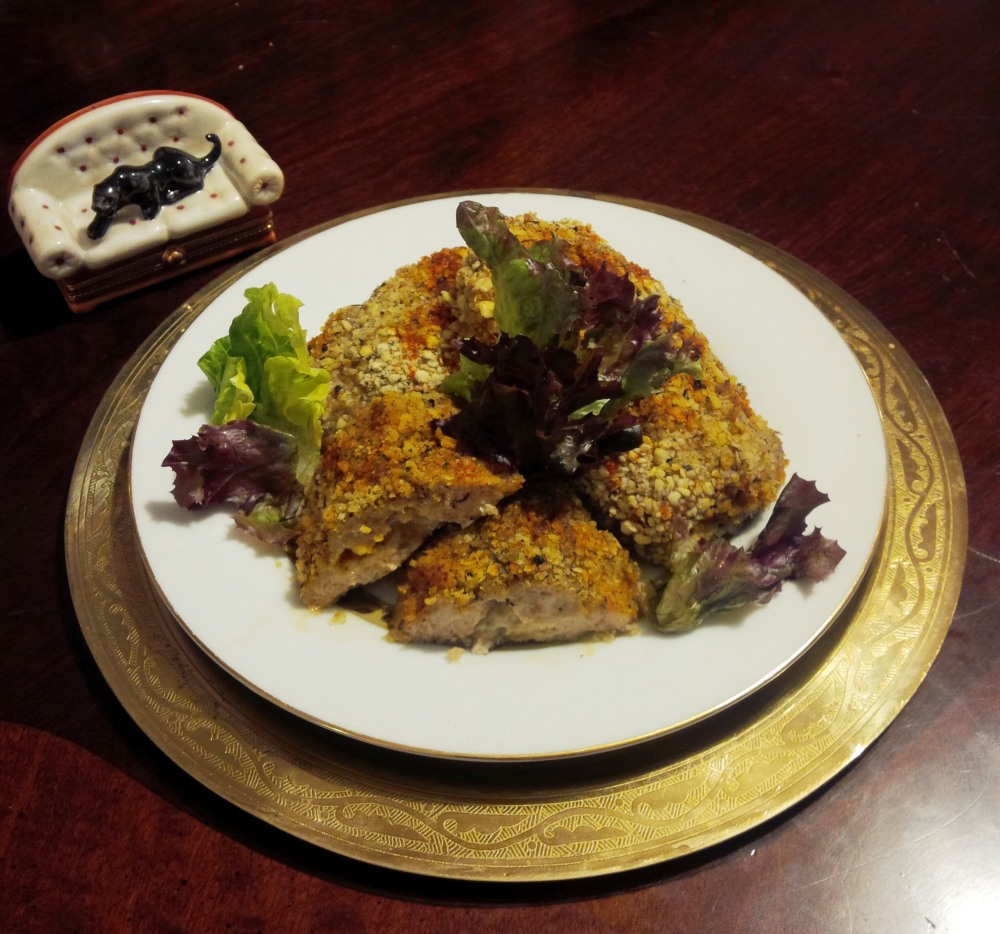 Here you have it, one of the most famous Russian dishes, golden and crusty on the outside, yet oozing with not-really-butter on the inside. Beloved by the Tzar, it both crunches and melts in your mouth at the same time. From the royal table to yours!