I made this new cake for Shabbos. This is how it came about. I am a frequent visitor and sometimes contributor to http://www.myrecipemagic.com (look me up there!). As I was browsing through two-or-three-ingredient desserts – I love those! – I discovered a combination of cake mix and soda pop, with frosting on top. I am sorry I have not noted the name of the author of this recipe, to give her credit – my bad! 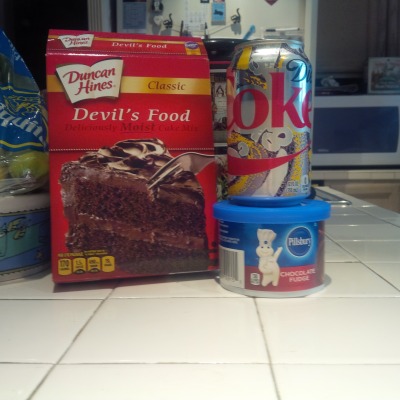 I happened to have a Devil’s Food cake mix and Pillsbury Chocolate Fudge frosting in my pantry, to make brownies for the first Shabbos after Pesach (will post that recipe when I make them next time). Since I am from Odessa, and in Odessa, we cook with wine and bake with brandy, and since kosher brandy (or cognac, if you will) is unbelievably expensive, I have learned to use rum instead. Even though most rum connoisseurs recommend using white rum for mixed drinks and for baking, I prefer dark spiced rum. It adds notes of vanilla and cinnamon which creates a more sophisticated taste. But it’s up to you – choose your own. 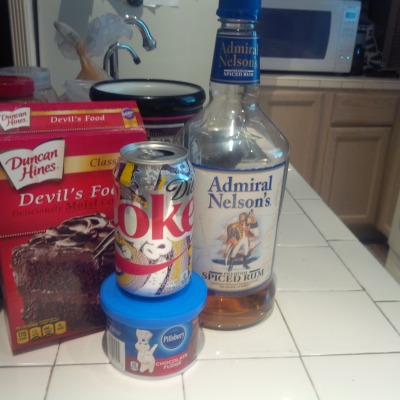 So I poured off a jigger of coke (about 1.5 fl oz) and replaced it with a shot of rum. I added both liquids to the dry mix and beat it with a mixer on high speed until it turned into a creamy mass, about 3 minutes. As I licked the mixer blades clean – hey, childish delights never die! – it seemed to me a little too sweet, almost cloying. Well, sure, a Cuba Libre drink is not complete without a slice of lime or a squirt of lemon! Perhaps some tangy jam will do the trick?

I used Smuckers’s Blackberry jam, but Blueberry or Sour Cherry are good alternatives. Note that the Coke is diet and the jam is sugar free. I have tried sugar free frosting in the past and was not satisfied with the taste, but I do try to cut calories wherever possible. 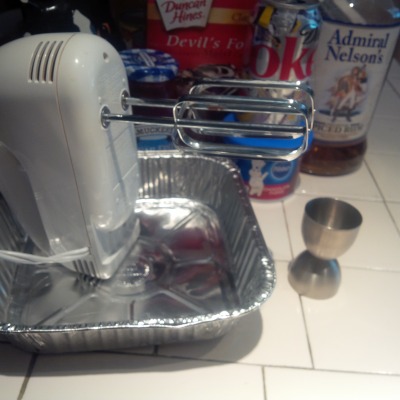 I used two 8×8 pans because I suspected that it would come out so light and airy that it would be very hard to cut it in two sheets to insert jam in the middle. So I baked the two sheets instead, cooled them really well – otherwise they were about to disintegrate! – and shmeared the jam on the bottom one. I covered the top and sides with frosting and, abiding by the first two of My Own Rules of Desserts (Rule #1: It’s not a dessert without chocolate; Rule #2: The more chocolate, the better!), added some chocolate sprinkles. Garnishing with berries and mint will also work very nicely and look festive.

Cuba Libre is one of my favorite drinks. It’s just rum and coke, with some lime or lemon. The story goes that it was invented by Americans who assisted Cubans during the Spanish American war. The battle cry was ¡Por Cuba Libre! (To Free Cuba), thus the name of the drink. I also thought that a fitting name for this cake would be Morena, which in Spanish means Dusky or Dark-complectioned lady. Help me choose the name – which one do you think is better? Vote!

Meanwhile, listen to our local celebrity Alex Fox, author of the song  Morena!Morena! with his sons David and Sebastian and daughter Carolina lighting Guitar on Fire while you are baking this funky creation.

Let the beauty of what you love, be what you do.