If you recognize them as cheese gnocchi, I won’t argue. But I grew up knowing them as Farmer Cheese Shilshkes in Yiddish or Galushki in Ukrainian. I also knew them as Lazy Kreplach  – lenivye vareniki (Kreplach is a Yiddish word for ravioli).  I thought it was just my grandmother’s name for them. Think about it: instead of making dough, rolling it thin, cutting circles, preparing cheese filling, putting filling in the center of those circles, and gingerly but firmly pinching them shut, you just dump all ingredients into a bowl, dough and filling ingredients together, mix them up and cook for a few minutes in bite size pieces. As my great-uncle used to say, it’ll all mix in your stomach anyway!

Watch Patzyuk, a character in Evenings on a Farm Near Dikan’ka by a Russian classic Gogol trying to improve on this process in his own way.

If you want to watch the entire film – and it is very funny! – Youtube has it with English subtitles.

It took me quite a few years to realize that this was what the Russians named this Ukrainian dish when first introduced to it in 17th century. I choose to interpret it as more admiration for ingenuity than offense!

Dump farmer cheese, flour, eggs, a little bit of butter, salt, and sugar into a bowl in no particular order. Mix well until the dough pulls away from the sides of the bowl.

The dough will be soft but not sticky. Dump it onto a floured surface and generously dust it with flour. Divide the dough into four to eight parts, depending on the number of kids you want involved in the fun and their ages.  Issue separate boards to your kids and let them roll their own round bands. The length and width of them doesn’t matter. They don’t have to be even. If they are more flat than round, that’s even better because eventually you have to flatten them anyway.  Don’t forget to snap a photo of your kids covered in flour from head to toe! 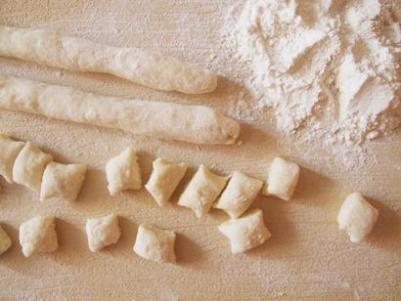 Once the bands – or strips, if you will – are ready and flattened a little, cut them into squares, or rhombuses, about 1/2 square inch (about 2 sq cm) each. Cover and refrigerate. If you don’t plan to serve them right away, though, freeze them and don’t defrost before cooking.

Bring a pot of water to boil, add salt and a splash of oil. Place refrigerated or frozen shlishkes into boiling water, stir, reduce heat to medium. If they had been refrigerated, they are ready as soon as they pop up to the surface. Frozen, they have to cook for about four – five minutes after they have popped up.  Do not crowd the pot! Remove with a slotted spoon and immediately toss with butter. 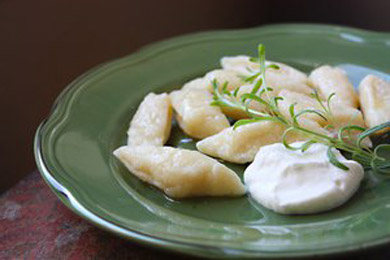 Serve with sour cream. They will melt in your mouth, but don’t expect them to jump into sour cream and then into your mouth on their own. Sorry, but you’ll have to use a fork!