I’ve been trying different recipes for healthier, no fat, low cholesterol, and – dare I say it? – non-dairy blintzes for quite some time, but somehow it wasn’t happening. None of them had that Shavuosdike tam – the taste of holiday.   Until suddenly, about two weeks before Yom Tov, my husband decided to stay home in the afternoon to work from his home office. Since this was not just a rare occurrence, but a truly astonishing never-occurring surprise, I hadn’t planned his lunch. I had to improvise in a hurry with what I had at hand that could be quick because I had to get ready to go to work. My first idea, banana pancakes, went flop when I couldn’t find even one decently ripe banana ready to be mashed up. Carrot pancakes are my thing, but he does not like plain carrots, so I was back to bananas that were not ready or apples that I didn’t have time to grate. Pumpkin takes a long time, and I didn’t have it anyway. What to do? That’s when I recalled a recipe for whole wheat pancakes I had liked on veganmiche.com. I had everything it required which wasn’t much, just whole wheat flour and soy milk, brown sugar and vanilla, some baking powder and a pinch of salt. No eggs, no fat, and made in no time at all.

So I made them. I made three, then I had to rush off to work, my husband said that three was more than enough, topped with no-sugar-added blueberry jam from a Russian store, and I left. I had some leftover batter, which I put in the fridge. When I later asked my husband how he liked them, he said they were delicious but a little dense. Oh, but Miche herself said in her post that she sometimes added more liquid when she wanted a thinner batter! So when I took that leftover batter out to make some pancakes for myself, I added some more soy milk. It started looking suspiciously like batter for blintzes, rather than pancake batter. I added a little more water and started frying. What came out was a half-dozen of perfect bletlach, blini, ready to be filled, folded, and fried just like the real blintzes. And that’s without eggs and using whole wheat flour – Miche, you are a genius!

On the spot, I decided to create a non-dairy filling appropriate for these radically different blintzes, and, since blueberry jam seemed to work well with pancakes, that was already a hint. 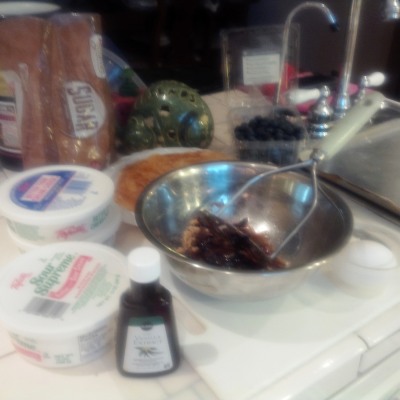 I didn’t use the jam, though. Blueberries are in season now, and I got a pint of absolutely gorgeous, huge, juicy, and sweet fresh berries. Tofutti – my best friend! – makes Better than Cream Cheese that I mixed with smashed blueberries. I was prepared to add some Tofutti Sour Supreme, if the mixture would not be the right consistency, but blueberry juice made it unnecessary. Since Miche used brown sugar in her original pancakes recipe, I decided to be consistent and to use it in the filling as well.  A little bit of vanilla would bring it closer to the taste of traditional cheese blintzes. No eggs in the filling, just like in the batter. 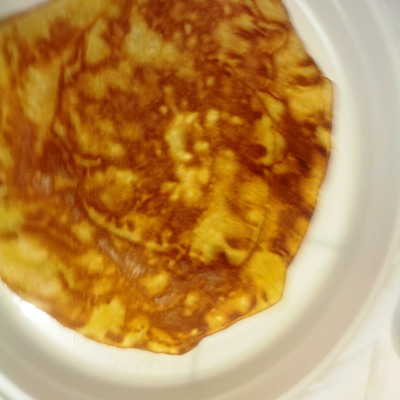 From this point on,  I simply followed the routine of making blintzes, as described in Traditional Cheese Blintzes. It’s amazing, but the egg-less bletlach came out just fine, even if a little thicker than usual because of whole wheat flour.

The filling was much more liquefied than the cheese filling I have been used to work with, and without eggs to bind it, I was afraid it would run while frying. I bravely pushed ahead, though, and folded them all.

Only afterwards has it dawned on me that I should’ve used my own advice and added a tablespoon of flour. However, nothing untoward happened; they got fried, flipped, removed from the pan, spread on paper towels to blot out excess oil, and finally arranged on a serving dish, and all of that without breaking, tearing, or running.

I garnished them with the remainder of those beautiful blueberries. They were a huge hit! Thank you, Miche, for giving me an idea for something that made our holiday extra special!