Salads are just salads, no matter how unusual and how creative they are. But here we get into the meat of our family tradition for Shavuos, if you can say that about a dairy pie. I don’t even know whether it is correct to translate it as a pie, but you can blame Google Translate for that: Pirog translates as Pie. It’s not round, it doesn’t have a crust, the filling is wrapped in flaky dough, and it looks like a deli roll up, but nevertheless, it’s a pie. Go figure.

The first time in my life I looked a cheesecake in the eye was when I came to the US. Why it is called a cake, not a pie, is another mystery, but it is thought of as a Shavuos staple, almost a symbol. I had never heard of it, and, as a curious cat, started researching. Far from being Jewish, it’s a Greek thing! Created on the island of Samos, about 4,000 ago, it was considered a good source of energy. Athletes consumed huge quantities of it during Olympic Games, and brides and grooms requested it as a wedding cake. Archaeologists actually found Greek cheesecake molds dating about 2,000 B.C.E. but the first known Greek cheesecake recipe, and a pretty basic one, was recorded only in Third century C.E.

Romans got the cheesecake from Greeks together with empirical science and Pythagorean geometry. They added eggs and put the filling into a pastry. It was still not the round crust that we  know today, but we are coming close. Marcus Cato, a politician famous for opposing Julius Caesar, is the author of the oldest known Roman recipe, about first century B.C.E. It was reserved only for special occasions by Roman elite. As the Roman legions covered Europe, they brought cheesecake with them. Several hundreds years having been lost in the dark medieval times, we see the cheesecake again  on the table of Henry VIII. Perhaps he also believed in the special energy conveyed by this dessert as he married and discarded one wife after another.

We are coming still closer. In the 18th century cheesecake finally assumes the shape and look that we know today, and that is how it is brought to America. The man credited with the famous New York style cheesecake is none other than Arnold Reuben, of the Reuben sandwich fame. But guess what – he called it a pie! So we are back a full circle, and we still don’t know what makes it so Jewish and so specifically designated for Shavuos. I am allowed to make a wild guess, and I am making it: the circle is the key, analogous to blintzes which originated from Russian blini, round as a cheesecake, round as the summer sun, round as the cycle of seasons around the year.

Now that we know what we don’t know, but we do know that in Morocco and Tunisia they serve burekas, flaky pastries filled with cheese, and in Yemen, Shavuos is not celebrated by eating dairy foods at all, let’s get back to my spicy cheese and scallions pie. 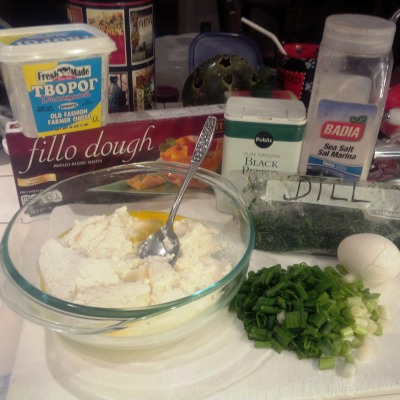 Just like the ancient Greek recipe, mine is very basic. I use Fillo dough, but any flaky dough will do, I am sure. And yes, my grandmother did teach me how to make flaky dough – we didn’t have ready-made one in stores, you know! – but hey, this is America, what a country! You need farmer cheese for filling, mixed with diced scallions, eggs, lots of fresh dill, a pinch of salt and lots of pepper.

I’ve already mentioned in another post that the crucial element of my Shavuos menu is the combination of colors, white and green, and a touch of gold. There are several explanations of the tradition to serve dairy foods on the first day of Shavuos. The one children are taught, and I remember from childhood, is the explanation given by the Chofetz Chaim in Mishnah Berurah: since the Jews were given the Torah on that day, and the  laws of kosher slaughtering and preparing meat had been unknown up to that point, they had no choice but to prepare a dairy meal, until they got ready to deal with meat the right way.

The green stuff celebrates another aspect of this holiday, otherwise called the Holiday of Bikurim, the First Fruits. On Shavuos, we read the story of Ruth, a young widow, a paragon of loyalty and devotion to her mother-in-law Naomi. 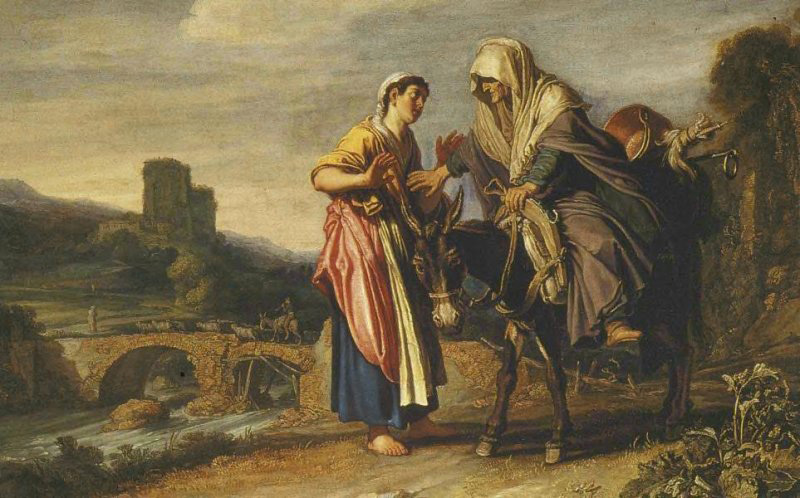 No matter how hard Naomi tries to convince Ruth, a Moabite princess, to return to her parents, remarry, and assume status appropriate to her royal lineage, the young woman declares, “Wherever you go, I go. Wherever you live, I will live.” In hardship and dire poverty, she cares for her mother-in-law and tries to procure some food. As a common beggar, she gleans the field of a wealthy judge Boaz who, according to the law, has left the corners of his fields unharvested.  He happens upon this beautiful woman, but is impressed not as much by her beauty as by her modesty. While gleaning, she bends down in such a graceful manner that her forms are not overly emphasized by her garments. 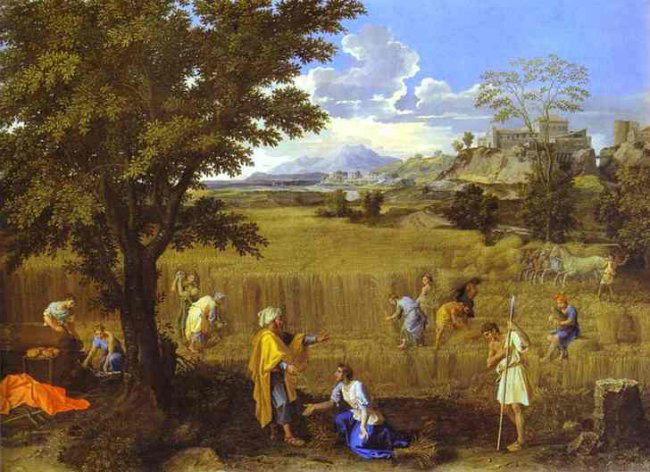 “And who are you, girl?” – probably says Boaz in Poussin’s painting, “Haven’t seen you here before, have I?”

“Just a poor widow, kind sir, picking up some leftovers, to feed my mother-in-law and myself.”

“And who is your mother-in-law, then?” Oops! thinks Boaz to himself, but she is family! Now what?

Now the plot thickens as Ruth tells Naomi about this nice distinguished older gentleman she had met while gleaning the field.

“Allright, my daughter, – exclaimes Naomi – we are all set! Go get dressed up, make yourself pretty, find a place where he sleeps, and lie down at the foot of his bed.”

Modesty or not, Ruth does as she is told, and Boaz is understandably shocked when he wakes up and finds her there in the middle of the night: “What in the world are you doing here?”

And she says, in full seriousness, as she had been instructed, ” I came to teach you the Law. You are my closest relative, my husband left me no children, you must marry me to continue his house.”

I won’t go into some more details of this transaction, but the result is well known: they got married, had a son Oved, who had a son Jesse, who had a son… King David, who was born and died on Shavuos. There – we are back to the white and green cheese and scallions pie.

I would usually separate the flaky dough layers and overlap several of them on a generously greased baking sheet, spraying every layer with oil. The layers should be overhanging the baking sheet on both sides and on the wide side closer to you by about an inch (2.5 cm). The dough is extremely fragile, but don’t worry. If you break or tear it, just spray some more oil and spread another layer.

The filling is spread evenly from one side to the other. Then I usually fold the wide back flap first, then the side flaps, then just roll it the way I roll sushi, but making sure not to tear the dough. You have to end with the seam on the bottom.

To make it real pretty and golden, like the sun, I glaze it with a whipped egg. A little trick to make it easier is to add a few drops of water before you whip the egg. Be very gentle with the brush lest you tear the dough.

Now it goes into the oven for 40 minutes at 350, and comes out golden and beautiful, the way my father liked it.

The paltry sum of a life on the road

Change Your Life to Live an Authentic Life Over 50

Daily thoughts based on thirukkural and the Bible

“My Food Trolley” is all about making your food exquisite, delicious and easy to cook.

Unravelling the Gen Z mind one article at a time

Tanvi Bytes
Beyond The Lines

The truth lies beyond the lines!

Where Travel Gets Weird