There are so many different eggplant recipes! Baked, and fried, and grilled, and stuffed, and spiced and seasoned in a myriad of ways. Truly, eggplant is the most versatile of all vegetables. And not one of those is the one that every woman in Odessa puts on her table. Ok, there is Spanish eggplant that comes pretty close, but still, it’s not the taste that we all knew and loved. So even though I like playing with eggplant in all kinds of ways, like making rollatini, or babaganoush, or stuffed pickled eggplant, and at some point in the future I’ll probably write them up and post them, but Odessa style eggplant was not called Eggplant Caviar for nothing. Taste it, and you’ll see why! 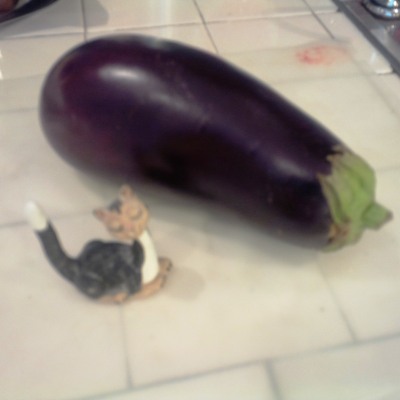 I got this lovely firm purple eggplant (in Odessa, they were called sini – the blue ones – I’ve never figured out why). While I already have my oven on broil to make marinated peppers, I might as well use the oven to bake the eggplant. It takes very little time, but you have to turn it every couple of minutes or so, to get uniform texture throughout. If the skin appears burnt a little, don’t worry, it’s actually good. It makes it easier to scrape the “meat” out and it adds a hint of a smoky flavor. 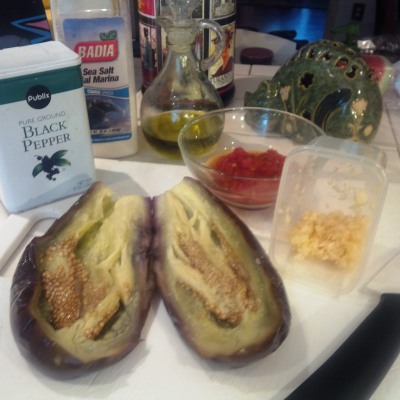 When it is ready and cooled off sufficiently so you can work with it without burning your fingers, this is what it should look like when you open it. It should be quite soft but still springy rather than watery. If it feels watery, put it under press for a few minutes and then squeeze the excess water out. My prep is all ready: squeezed garlic, diced tomatoes (excess liquid poured off), salt, pepper, olive oil, fresh cilantro. To start making eggplant caviar, you need to scoop or scrape the “meat” out of the skin. I’ve seen people scoop it out with a spoon, but I prefer to scrape it with a knife. Cutting the eggplant into quarters lengthwise makes it very easy. However, it could be done in any which way comfortable to the doer.

Now comes the important part. You need a meat cleaver, or at least a very wide and heavy knife.  On the cutting board, start chopping and folding. Continue until it is somewhat mixed but still very chunky. Make a well in the middle, pour olive oil into it, cover it with garlic, salt and pepper. Resume chopping and folding, making sure that not a drop of oil escapes.

Make a well in the middle again and add diced tomato and cilantro. Keep chopping and folding until you get a chunky but well mixed mass. I can’t offer an exact standard here since it always depends on individual taste, and perhaps there could be another method of doing it instead of killing it with a meat cleaver, but I’ve never seen it prepared in any other way. I did try a food processor once, and it was a disaster to top all food disasters! What came out was a watery mess, and in a matter of minutes more liquid separated itself from the solid mess. So don’t do it, people! If you want to have a real Odessa Caviar, kill it with a meat cleaver first.

There are many songs about Odessa, but this one, from the musical The White Acacia by Isaac Dunaevsky became one of the symbols of Odessa. Even the grand clock on top of the city hall chimed a few bars of this song every hour: “You are in my heart, you are always with me, my Odessa!” Listen to Odessa sound and marvel at the beauty of Odessa architecture, while you are enjoying Odessa Caviar. 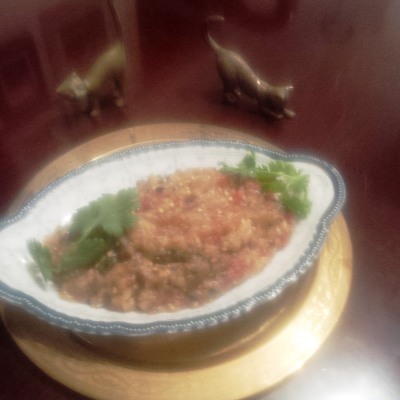